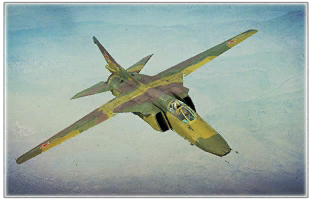 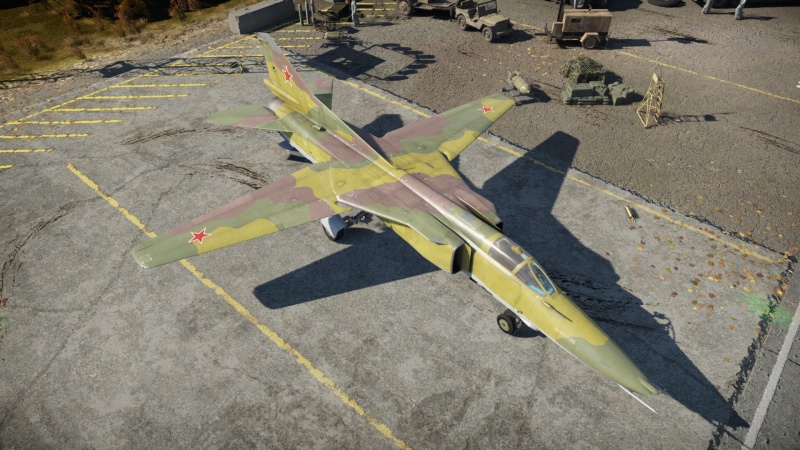 The MiG-27K is the most advanced Soviet variant of the ground attack Floggers. While it looks about the same as the MiG-27M and flies identically, it has a more complex sensor suite in its nose that effectively offers targeting pod functionality. The only new weapon is the KAB-500L laser-guided bomb, but the new avionics drastically improve its ability to employ its arsenal of laser-guided weapons. When flown carefully, the MiG-27K is the finest CAS option for Soviet pilots, capable of striking ground vehicles from long distances in relative safety from enemy SPAAs.

The MiG-27K can be outfitted with the following ordnance presets:

As mentioned before, the MiG-27K's arsenal is largely the same as the MiG-27M's. Unguided options include bombs, rockets, and gun pods and the TV guided weapons are still the Kh-29T missile and KAB-500Kr bomb. These two weapon categories function more or less the same as the MiG-27M. The real stars of the show are now the laser-guided weapons: the familiar Kh-25ML and Kh-29L missiles are far easier to use with the MiG-27K's optics, which have high zoom and a wide field of view akin to an attack helicopter. It is now possible to designate and track targets from long distances and indirect angles, which makes flying the aircraft in attack approaches much easier. The new KAB-500L laser-guided bombs are an extra option for those who want precise and powerful explosions that can take out clustered targets, but they are slower than the air-to-ground missiles and may be trickier to guide due to their unpowered nature.

The MiG-27K is the final Soviet version of the MiG-27 ground attack aircraft, derived from the MiG-23. This variant of the MiG-27 differs from previous versions mainly through the inclusion of an onboard laser designator and compatibility with TV-guided weapons systems.

The MiG-27K is a variant of the MiG-27, a ground-attack aircraft derived from the earlier MiG-23. Compared to the MiG-23, the MiG-27 featured a revised downward-sloping nose, leading the aircraft to be nicknamed "Balkon" ("Balcony") because of its improved frontal visibility. The aircraft also had simpler non-variable intake ramps and a fixed engine nozzle, leading to weight savings. In accordance with its ground attack role, the MiG-27 lacked a radar and was instead fitted with ground attack systems.

The MiG-27K followed the previous MiG-27M as the ultimate variant of the MiG-27 in Soviet service. The most notable change was the addition of a laser designator and targeting pod in the nose of the aircraft. Additionally, the aircraft gained the ability to carry TV-guided munitions. In total, roughly 200 MiG-27Ks were built for the Soviet air force.