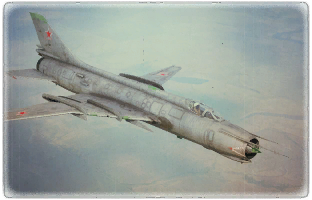 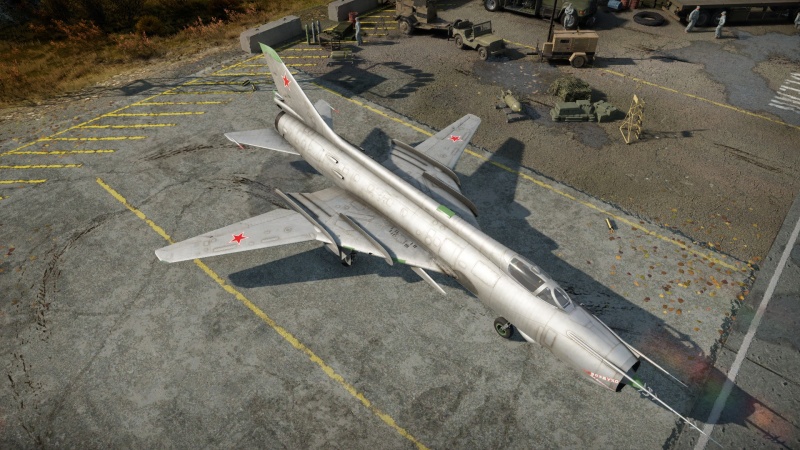 The Su-17M2 is a rank VII Soviet strike aircraft with a battle rating of 11.0 (AB/RB) and 10.3 (SB). It was introduced in Update "Ixwa Strike". The Su-17M2 is the first aircraft in the game to feature variable sweep-wing mechanics. 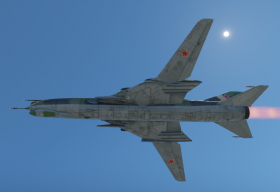 The Su-17M2 has extremely competitive flight characteristics given by its variable sweep wings, which can change from an angle of 30 degrees swept forward to 63 degrees when fully swept back. Firstly, the Su-17 is fast. This aircraft can reach a top speed of ~1,440 km/h TAS on the deck (or 1,420 km/h IAS), meaning that it can easily outrun Phantoms, MiG-21s, and other comparable top-tier aircraft. The only two exceptions to this are the Italian F-104S Starfighter and British Phantoms (FGR.2 and FG.1), which can outrun the Su-17 at sea level by a small margin. The aircraft's acceleration is very competitive below speeds of 1,100 km/h, but does take more time to accelerate above that speed. Note that acceleration at high speeds improves dramatically when the wings are swept fully backwards. 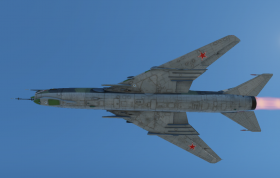 In terms of overall agility, the Su-17M2 is quite manoeuvrable, though this performance is greatly affected by wing sweep and speed. When the wings are swept backwards, the aircraft handles very similarly to the prior Su-7B. However, when the wings are swept forward, you will see a dramatic improvement in turn performance - in fact, the Su-17 can out-turn Phantoms when wings are fully swept forwards. The sustained horizontal turn rate peaks at 17°/s between 650-750 km/h IAS when it carries missiles with automatic wing sweep controls, which is better than any F-4, MiG-21 and most of other dedicated jet fighters. In fully swept forward configuration it further increases to 19 °/s in sustained turning above 700 km/h IAS .The Su-17's turn rate decreases a lot at low speed below 500 km/h IAS and its instantaneous turn rate is mediocre at best. The aircraft features an all-flying tail making elevator performance quite adequate. The aircraft's roll rate is worse compared to other jet fighters like the MiG-21 or F-4, with the automatic sweep wing control it reaches 90°/s at 600 km/h IAS and increases to 105°/s at 900 km/h IAS.

Structurally, the aircraft's wings rip at 1419 km/h IAS when fully swept back, a speed that the aircraft can attain easily at sea level. However, this speed limit depends on the wing angle and is reduced to just 1,050 km/h IAS with wings swept forwards.

The Su-17M2 is quite survivable for a top-tier jet. Armour protects the pilot, with a 36 mm aluminium armour plating on the sides and back, as well as a 20 mm plate behind the headrest. The forward canopy features 25 mm of armoured glass, as well as a thin 8 mm steel plate in front of the controls. The large engine is mounted at the rear of the fuselage, while fuel tanks are mounted underneath it, as well as in the inner parts of the swept wing surfaces. Two sets of structural spars run the entire length of the wing, though only the forward set of spars are completely linked to each other.

The Su-17M2 is surprisingly easy to fly even with serious damage - the aircraft can safely make it back to the airfield even with a wing missing, due to the powerful ailerons. However, note that any damage to the wing surfaces can cause a large imbalance in lift, making turning difficult.

The Su-17M2 can be outfitted with the following ordnance presets:

The Su-17M2 is an extremely versatile aircraft due to its excellent flight performance and large variety of suspended payload options. As a result, a multitude of playstyles can be used. The Su-17M2 can be used as a support fighter, flanking and making full use of its powerful R-60 missiles, but can also be used as a bomber and CAS aircraft, in both Air and Ground RB.

The Su-17M2 works quite well as a fighter, as it is fairly manoeuvrable and can be equipped with 4 x R-60 missiles which are extremely agile and track very well. In this role, it has two major advantages - speed and manoeuvrability. It can outrun everything except for the Italian F-104S Starfighter and British Phantoms when its wings are swept. It can out-turn everything except for the Mirage IIIC / IIIE and J35D Draken when its wings are extended, unless the Su-17 is close to its optimal speed at the start of the engagement and the enemy player forces them into a longer horizontal turn fight. In this regard, the aircraft works best in a support / boom & zoom role. At the start of each battle, climb a bit (but not over 3 km because you will be Phantom food) to the side of the map. Once most enemies have been spotted, turn into the battlefield and utilize Boom & Zoom manoeuvres. Target enemies that are slow or not paying attention. If you are behind multiple enemies, target the lowest enemy first, so that you are below the rest of the aircraft. This ensures that you remain on the blind spot of the rest of the aircraft.

It is not recommended to engage in extended dogfights. Though you may win a single dogfight, it will leave you slow and vulnerable to a follow-up missile attack from an enemy, which you will not be able to dodge. Only dogfight if you have teammate support, and there are no other enemies in the area. Your 30 mm NR-30 cannons are extremely capable of destroying enemy aircraft, especially using the Air Targets belt, which can usually confirm a kill with only a few hits, if not one or two.

As a bomber or fighter-bomber

The Su-17M2 can be used as a bomber, particularly when you haven't unlocked the R-60 missiles. The aircraft can carry loads of 20 x 100 kg bombs, 10 x 250 kg bombs or 8 x 500 kg bombs. The 100 kg bombs can take out a single mini-base (found on all maps with three bases) or a single large base (found on Ruhr and any four-base map), requiring you to drop all ordnance. The 250 kg bombs can take out two larger bases (5 per base) but are insufficient for a large base, meaning that the 100 kg bombs are better in this regard. The 500 kg bombs are the best option, being capable of destroying two+ mini-bases (3 per base) or two large bases (4 per base). When you bomb, make use of the Su-17M2's ballistic computer, which will give you an aiming reticle (similar to AB bombing) which displays your bomb's impact point. Simply nose down to a -10 degree dive or more and the reticle will appear. 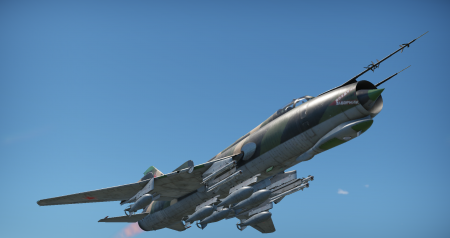 However, when you are bombing, it is critical to maintain situational awareness. Before you bomb, plan out the flight path that you will take to return to base, because otherwise, you will be clubbed by a large group of angry enemy fighters. If the base you are bombing is far within enemy lines, flank and fly to the side of the map before commencing your attack. Do not rush straight for the base, especially if the base is deep within enemy lines, because you will< be shredded. After you complete your attack, return to base and reload.

Su-17M2 can most more effective when used as a fighter-bomber or multirole aircraft. This role allows you to get a high RP reward by bombing bases, and then contributing to your team by serving as a fighter. In this regard, the 6 x 500 kg bomb + 4 x R-60 missile loadout is the most effective. Bomb 1-2 bases (depending on map), then fly towards friendly lines, before beginning B & Z style fighter attacks.

Finally, the Su-17M2 can be used as a CAS aircraft, particularly in mixed battles (Ground RB). In this regard, the aircraft excels due to its massive ordnance options. The aircraft's loadout of unguided bombs and rockets should come as no surprise to anyone who's played the Su-7B / BKL aircraft. Of these weapon types, the 500 kg unguided bombs can be extremely effective due to the large number of bombs carried - these weapons can be deadly when combined with the ballistic computer. As well, the aircraft can carry S-5K, S-3K and S-8KO rockets, along with the massive S-24 "Tiny Ivans". These weapons are all quite effective against enemy armour. 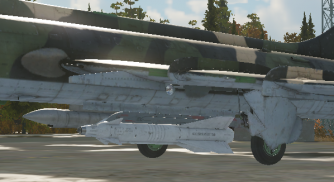 However, the aircraft does get access to some highly unique munitions, being the Kh-23M, Kh-25 and Kh-29L AGMs. The Kh-23M can be considered as an equivalent to the AGM-12B Bullpup, with a similar MCLOS guidance system and explosive mass, and can also be found on the Yak-38. However, the other two missiles are unique to this aircraft only. The Kh-25 is a laser-guided version of the Kh-23M with a larger warhead - this means that you can steer the missile using your mouse. Make sure to turn on the ground missile lock using spacebar or a custom keybind, then fire the missile and guide it by mouse. The Kh-29L is very similar, but features a massive 150 kg warhead with 103 mm of penetration. Note that enemy tanks with laser warning systems will be able to detect the launch of a Kh-25 or Kh-29L missile. As well, the main drawback of these weapons are the amount carried - the Su-17M2 can only carry a single Kh-29L or two Kh-25s. Thus, unguided bombs can often be more effective at destroying enemy vehicles.

The Su-17 is equipped with a SRD-5 rangefinding radar, located in the nose of the aircraft. It will automatically detect other planes within the scanning area and display the range to the closest target. It is linked with a gyro gunsight and can help with aiming at close range.

During the further development of the Su-7B project and the tendency of fighter-bomber aviation to increase the combat mass of an aircraft, the problem of difficult takeoff and landing on shorter runways became apparent. However, a massive supersonic bomb with an ability to make a missile strike as well was all too an alluring military power to simply give up! The TsAGI research institution studied the prospects for a scheme with a variable sweep-wing, which was able to facilitate takeoff and landing of a heavy aircraft at subsonic speeds. Studies have shown that when using the classical variable sweep scheme, the desired effect will not be achieved, even to the contrary, the performance characteristics will significantly decrease. However, if only part of the wing is designed to swing, take-off and landing will become noticeably easier, and flight characteristics at subsonic speeds will increase greatly.

This is how the project of an experimental prototype of the S-22I appeared: a sweep-wing fighter-bomber made on the basis of Su-7BM. After successful tests, the fighter-bomber designated Su-17 was adopted for mass production. At the beginning of the 70s, the Su-17M modification appeared, a little later supplemented by the Su-17M2 modification, in which the most contemporary developments at that time were combined, including new navigation systems and an aiming system with a laser rangefinder, featuring a total payload of 4,000 kg. Serial production of the Su-17M2 began in 1974, a total of 152 units of this modification were produced.