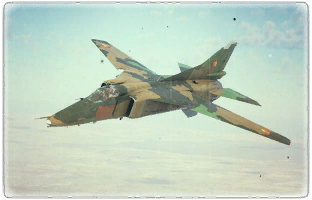 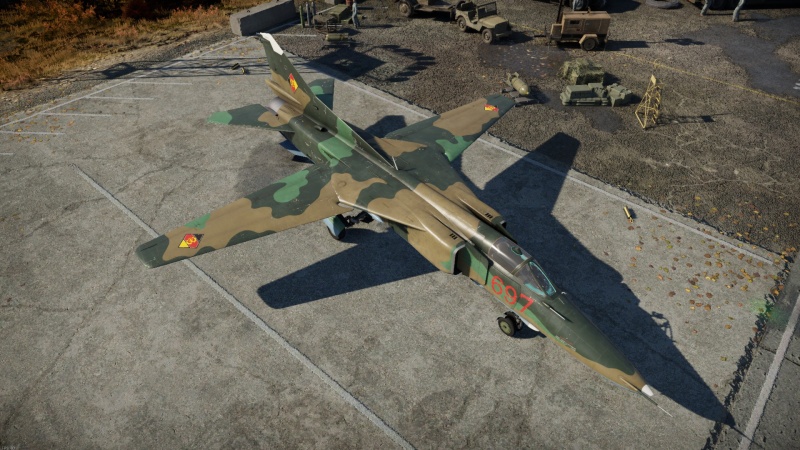 The ◊MiG-23BN (NATO: Flogger-F) is a rank VI German strike aircraft with a battle rating of 9.7 (AB/RB/SB). It was introduced in Update "Drone Age".

MiG-23BN was based on its previous model MiG-23B which a dedicated attacker, where MiG-23B was based on the airframe of 1st generation MiG-23S interceptor. While it looks exactly like previous MiG-23s in-game, all the bombs, AGMs, and rocket pods will certainly tell another story to the targets on the ground while excelling at fast speed to leave the combat area. Alternatively, it can take down aircraft with its gunpods and a similar mobility to the MiG-23 interceptor variants.

At first glance, aside from having the LSK's emblem (East German Air Force), the MiG-23BN looks exactly like any other Flogger. A closer inspection on its nose gives its identity away: as an attacker, MiG revised the nose with a flat bottom for the B variants; but the BN removed the optical equipment for this exact job. Since it was based on the first-generation MiG-23 but with a R-29B-300 engine, the overall flight performance is very similar to the MiG-23M in the Soviet tech tree but without AAMs. Experienced players might take the use of its iconic variable swept wing for dogfights, but do keep in mind that a major problem of these 1st generation Floggers were exactly the wings, it might be sufficient to take down heavier jets like Phantoms if utilized the wings well, but having only guns for air-to-air operations makes it a huge target for other jets. Any extra ordnance ranging from bombs up to AGMs affects the flight model severely, so utilize its speed in missions and avoid dogfights unless in dire situation.

The MiG-23BN has only a pair of 16 mm steel plates on the side of the cockpit as extra protection against other targets. If it has to commit to a head-on fight or even a dogfight, it might not have sufficient survivability to leave the combat in one piece.

The MiG-23BN (Germany) is armed with:

The MiG-23BN (Germany) can be outfitted with the following ordnance presets:

For players who jumped from the subsonic G.91 R/3 into the MiG-23BN, not only it is supersonic and goes up to mach 2.0, it also carries as much ordnance as its TT predecessor IL-28. For players of MiG-27 or MiG-23 variants, the flight performance is very similar as they were built under similar airframe but with some revision differences per blocks (batches). Some players might want to take it for a dogfight for its manoeuvrability as well as the variable swept-wing; but as an attacker, it doesn't have any AAM at disposal, the only viable option is the 23 mm gun for gunning down enemy jets with its fast rate of fire and sufficient damage. Additional 23 mm cannons can be mounted as wing-mount gunpods. The MiG-23BN doesn't have countermeasures either, the airframe is also rather unprotected other than 2 steel plates on the sides of the cockpit, so avoid enemies at all cost and only fight enemies when there's only one of them- any more than this number means the MiG-23BN will become an easy prey for the enemies due to its enormous size.

But there are some good news for the jet though: it is a very fast attacker in-game (only slower than its Sukhoi counterpart) and the payload is sufficient to deal devastating damage to enemies. It might not be as much as USAF's F-4C or British's Buccaneer, but the varietiy of bombs or AGMs will fit the player's playstyle one way or another. For players who demand a fireworks show on the ground and create as many craters as possible, conventional and incendiary bombs are at your disposal. While for a safer approach or for those who are not used with manual-guided missiles like the AGM-12B or the AS-20, it does comes with a pair of Kh-23M AGMs using mouse control with devastating damage. If the enemy SPAAGs, interceptors or in some occasion, helicopters with AAMs (namely, TY-90s found on PLAGF helicopters) are in business, the excellent speed of the MiG-23BN will certainly help you to get away from trouble since there are few jets that can catch up with your mach 2.0 top speed (but in high-altitude). Speed is what makes MiG-23BN unique among jet attackers of its era and BR; any prolonged fight in the combat area hugely increase its risk of meeting its end.