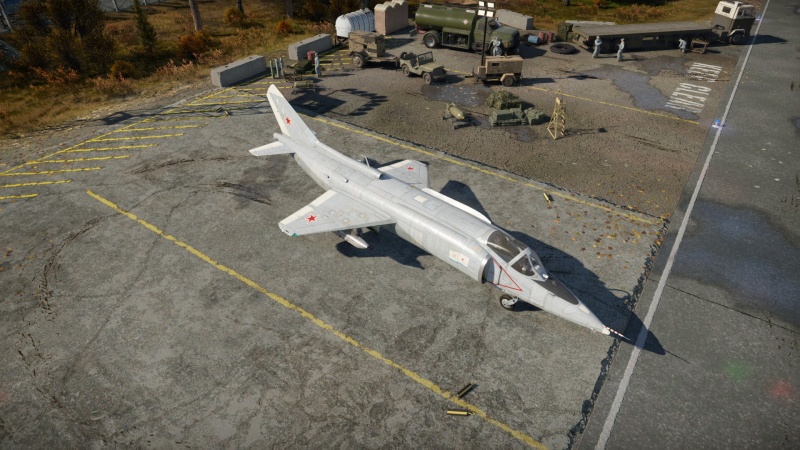 The Yak-38M is a rank VI Soviet strike aircraft with a battle rating of 9.7 (AB/RB/SB). It was introduced in Update "New Power". Like the Harrier, it is an aircraft with a VTOL capability. The Yak-38M is externally almost identical to the Yak-38 and the few differences are difficult to identify in combat, aside from the plane's stock livery. These features are the tail boom (long and coloured in red for the 38M while short for the 38) and the forward Pitot tube (striped for the 38M and unicolour for the 38).

The Yak-38M can be outfitted with the following ordnance presets:

The Yak-38 is not very fast (you can reach Mach 1 in a slight dive when carrying minimum loadout) and not very nimble (bad energy retention in tight turns) so you'll lose many engagements with dedicated boom and zoom and dogfight optimised aircraft. What really makes this plane shine is the customizable loadout as well as its amazing rate of climb (101.2 m/s when spaded) and acceleration.

Due to your low speed it is wise to avoid high altitude combat as you'll be pitted against supersonic interceptors at this BR. Try to stay low and either ground pound or destroy enemy attackers. Doing this your main opponents are F-86 and Harrier variants. Both of which will out-turn you in a dogfight.

You have two options for dogfighting aircraft:

Use your climb rate to get into an advantageous position. You can out-climb almost all aircraft of your battle rating. And as long as you stay at lower altitudes you'll most likely be able to avoid those aircraft that can out-climb you.

Switch to hover mode. The Yak's hover mode can only be engaged at speeds below 450 km/h so you have to plan ahead a bit or react really fast once you slow down enough. Your goal here should be to get into the center of the enemies turning circle. When executed correctly it is impossible for the enemy to get their aim on you, while you are still perfectly able to fire at them. And if they disengage they set themselves up for you to lock on with AAMs. But be aware that engaging hover mode will make you an easy target for other aircraft that are not part of the dogfight so it's best used in 1 on 1 situations.

The Yak-38M has several air-to-air options for its loadout. You can also set one additional 23 mm gun-pod as offensive weapon in your modifications menu. Keep in mind that gun pods add a substantial amount of drag and heavily impact your climb and turn rate and are not dropped after expending their ammo.

All combinations of gun-pods, R-60 and S-24B are viable but emphasize on different ways to approach enemy aircraft.

As with the Su-7 it gives you firing solutions for your guns on ground and missiles on ground.

The loadout you should choose depends heavily on whether you are playing Air RB or Ground RB. For Air RB gun-pods and rocket-pods are most useful to take out groups of smaller ground targets like vehicles, light tanks, howitzers, etc.

The available bomb loadout is not sufficient to be threatening to enemy bases in any way, so it is recommended to not attempt to bomb enemy bases.

For Ground RB the Kh-23M gives you access to two beam riding ATGMs with an TNT equivalent of almost 100 kg. As with all beam riding missiles you will be an easy target while keeping your nose pointed at the enemy. As you will face SPAAs equipped with SAMs at this BR, taking 2 x 500 kg bombs might be more useful depending on the situation and composition of the enemy team.

The Yak-38M was seen as a stepping stone to a better VTOL aircraft by the Yakovlev Design Bureau. A large part of the Yak-38M design would end up in the Yak-41M which instead of having 2 nozzles, would instead pivot a much larger single engine exhaust while still retaining the 2 lift engines at the front, and unlike the Yak-38M it was supersonic capable. In the Western world it was known as the Yak-141 while inside the Soviet military it was the Yak-41M. When the Cold War ended and funding for the project was cut Yakovlev looked for other companies that would like to enter a partnership. In 1991 Yakovlev would enter a partnership with Lockheed-Martin and due to this relationship officially change the designation of the 2 flying prototypes to Yak-141. Lockheed-Martin would end up using the experience they gained from this on their X-35 plane which would end up being the F-35 family of planes, the F-35B is the one that has the general engine layout of the Yak-141.