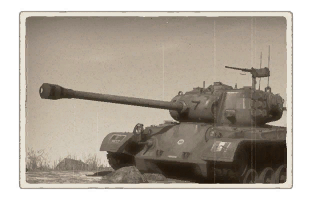 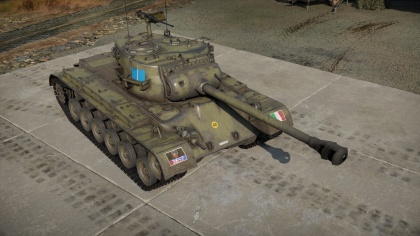 The M26 Pershing 132ª Divisione corazzata "Ariete" (132nd armored division) is a premium rank IV Italian medium tank with a battle rating of 6.3 (AB/RB/SB). It was introduced in Update 1.73 "Vive la France" as a bundle vehicle, but was removed from the store after War Thunder's 7th Anniversary. It was later reintroduced for the 2020 May Sale as a premium purchasable for 6,090 Golden Eagles

The M26 "D.C.Ariete" can perform in many different roles in battle. It can be used for supporting heavy tanks with long reload time as IS-2 or T32 or it can take part in flanking manoeuvres: your speed and agility are not brilliant but sufficient for that role. It can also be successful in sniping and ambushing situations. Use the lower profile of Pershing compared to the Sherman's to navigate through. Your depression angle allows you to shoot from upper positions without exposing too much yourself. That´s an advantage compared to most Russian vehicles which have close to no gun depression angle.

The 90 mm M3 gun owns a wide selection of ammunition to be used. The M82 APCBC with an explosive filler is extremely deadly. Usually, successful penetration with this shell can lead to a single-shot knock-out on a vehicle. It lacks a bit of penetration for the rank this vehicle sits at, but it's great for flanking shots. The M304 APCR shot gives the vehicle the ability to penetrate thick armour (provided it is a flat surface). This means you need to target crew positions or modules and aim at (almost) vertical armour. Against a Tiger II (H), this means aiming for the turret right side if he is looking directly at you on the gunner side. At that position, you can penetrate up to a distance of 1,800 m.

Although you are moderately armoured for your class, most enemies can easily kill you at this rank if you expose your tank too much. To reduce direct impacts in frontal engagements angle the Pershing, the V-shape frontal armour can deflect some shots. Your lower glacis is a weak spot, keep it hidden from the enemy.

One downside to the Pershing is the engine: the power-to-weight ratio is poor and does not allow for very quick manoeuvring. It uses the same Ford GAF that can be found in the late series M4 Medium tanks, with nearly 8 tons more weight. Being slightly underpowered, the M26 "D.C.Ariete" has a hard time climbing hills. You will need to know the maps and areas you are operating in and use them wisely.

If you've been able to flank an enemy, your first shot is decisive. Always shoot to disable the gun first (gunner or breech). The best ammo to do this is M304 APCR round, or M82 APCBC shell. M304 will guarantee a 100% successful shot, M82 can also work very good and might deal heavy damage inside the turret. But some Germans have tracks on the hull´s sides and if the enemy is in the process of turning the turret, the M82 could bounce. Make sure you not to miss. The large sides of German heavy tanks are tempting targets but its very easy to punch through without dealing damage with the wrong ammo like the T33 or M304 rounds. If you flanked a turretless tank destroyer like a Jagdpanther or a Ferdinand, just aim at the engine and you will have virtually killed it.

In arcade battles, it is much harder to flank and ambush enemy tanks because of the tag system (player name). However, the tank is still very playable and you can do different tactics depending on the situation. For urban environments, it's best to move with the team and only poke your head out when you have a good shot and the enemy tank isn't aimed at you. In open terrain, you will still be able to use the hills to your advantage and side-shot / pot-shot enemy tanks. The main rule here is don't show your sides and stay low.

In realistic and simulator battles, The M26 "D.C.Ariete" shouldn't be in the toughest part of the match facing very heavily armoured enemies. It's better to stay behind front lines supporting or try a flanking manoeuvre, you can´t be spotted in the mini-map. The high battle rating means you can be up-tiered and fight Cold War era tanks in simulator mode. The compression and matchmaking can put you into situations where enemies are especially hard to penetrate, even from the sides.