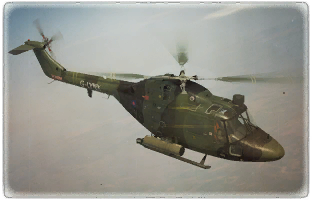 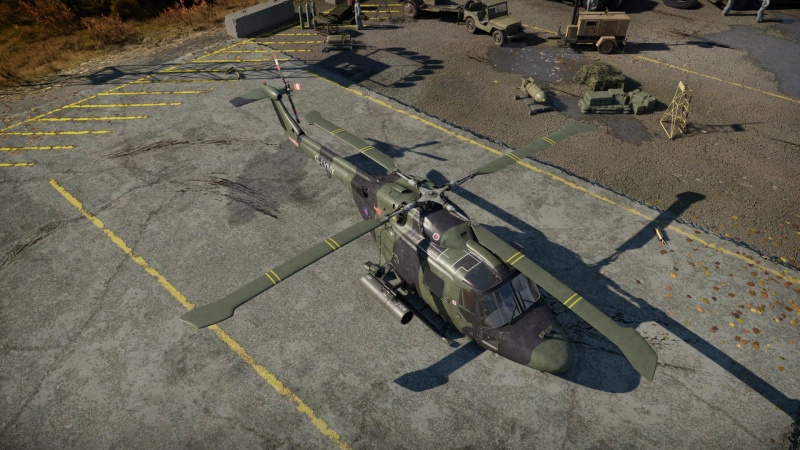 The G-LYNX is a premium rank VI British utility helicopter with a battle rating of 9.7 (AB) and 10.0 (RB/SB). It was introduced as a premium pack in Update 1.91 "Night Vision". It was removed from the store after the 8th Anniversary Sale, and was reintroduced in Update "Hot Tracks" as a Golden Eagle

The G-LYNX lacks any armour protection for the crew, and due to the size and placement of the fuel tanks the helicopter can be set on fire easily. It does support the choice of mounting 192 flares to the helicopter, giving it a way to dodge incoming IR-seeking air-to-air missiles.

The G-LYNX can be outfitted with the following ordnance:

The G-LYNX is a great helicopter to take out in ground RB due to its loadout of 8 Hellfires. While many other helicopters like the AH-1Z can carry twice as many, the G-LYNX can do so while retaining its decent manoeuvrability and speed. It also is equipped with a thermal view for the ATGM shooter camera, making it easy to spot enemies on the ground and in the air. The Hellfires can be ripple fired, making destroying multiple open targets really easy. There is also a choice to take out TOW-2 missiles, which offer better control than the Hellfires, with the tradeoff of being slower and having less range (3.75 km, compared to the AGM-114's 8 km). The G-LYNX also supports Hydra-70 unguided rockets, which you get 38 of. These can be used at close range to great effect, although at longer ranges it is hard to aim them due to the lack of a Ballistic Computer onboard.

In terms of air-to-air armament, the G-LYNX sports the choice of 4 AIM-92 Stingers, or 2 AIM-92 Stingers and a single 20 mm Oerlikon KAD-B cannon with 570 rounds of ammo. The latter is usually preferred due to the unreliability of the Stinger missiles. The Stingers might not kill the target with a hit, or the target might have countermeasures against IR-seeking missiles. With this it would leave the G-LYNX defenceless against aerial targets. That's why equipping the 20 mm cannon over the 2 extra missiles is a good choice. It can deal with aircraft who get too close.

While the G-LYNX does sport Stingers to deal with enemy helicopters, they are unreliable to use in the Heli EC gamemode. The Hellfires can really deal with close range targets as with long range targets, the missiles would take a top down approach, making it highly likely to miss the enemy. The TOW-2s would be a good way to down enemy helicopters, but leading them is quite hard and it will likely result in a miss. As it is with Ground RB, the gun is again really important for the armament of the G-LYNX. Being able to defend against helicopters who get too close for missiles is a good thing.

After some delays, the first prototype was ready for testing by the early '70s. In March 1971, the prototype conducted its maiden flight. In further sorties, the Lynx managed to break a number of world speed records for helicopters. Quite content with the Lynx's performance, the British Army placed an order for 100 units of the type to be produced in the mid '70s. Subsequently, the Lynx received its official army designation 'Lynx AH Mk.1'.