Difference between revisions of "P-51" 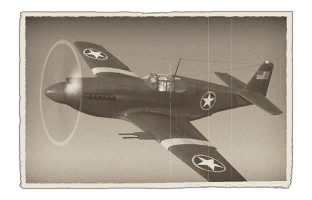 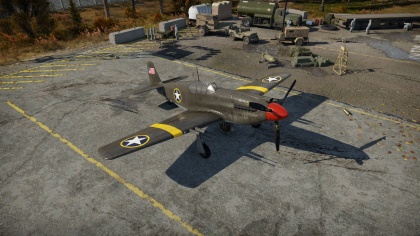 The P-51, when fully upgraded, is an extremely deadly opponent, especially as a rank III. The engine will have a hard time hitting the "overheated" mark, even when using WEP. Use caution though, as the engine will retain its heat when constantly on 100% power, so it takes a bit to cool down. Also be sure to utilise the flaps: they are a major asset to the plane's overall turn-fighting ability and sometimes allow it to survive a turn-fight with Soviet aircraft. This is an awesome plane for those just starting out in Realistic Battles, as the 20 mm cannons are good at scoring quick victories.

Quadruple Hispanos are devastating: pressing the trigger will significantly slow down the P-51. Now how is that for firepower? Although this is caused by the too light airframe which further causes vibrations and heavy shaking due the wing mounted position of all arms. Hence the accuracy is appalling after the first shots leave the barrels. Trigger control is important, even more so as the Hispanos like to overheat.