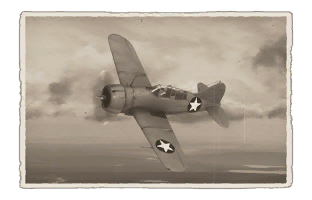 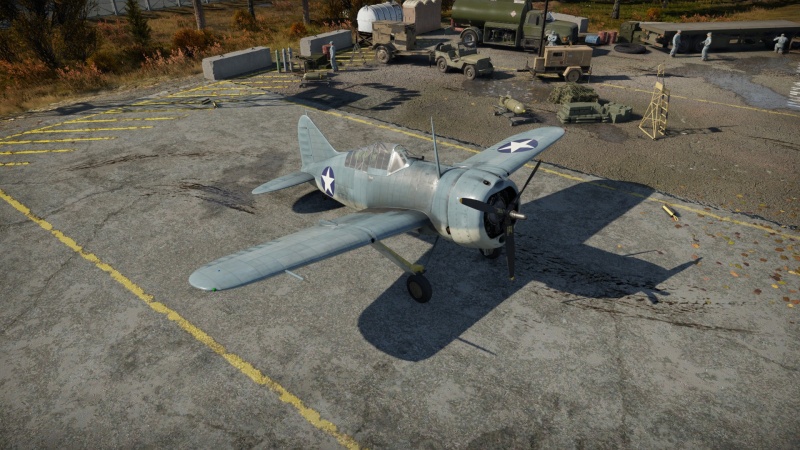 The F2A-3 Buffalo gives pilots the first real taste of typical American fighters in War Thunder- a lumbering, well-armoured beast of a fighter that is well armed and has decent performance capabilities. Indeed, the second Buffalo in War Thunder is a heavy aircraft for its rank, signifying that its turning ability is underwhelming against the sharp turners it meets, like low-rank Zeroes as well as more nimble German Bf 109s. Due to its 4 machine guns, the F2A-3 Buffalo is not very good in a dogfight with British or German aircraft.

The F2A-3 can be outfitted with the following ordnance:

The characteristics of the F2A-3 means that its pilots shouldn't try to turn-fight their opponents and that they should also strictly maintain their energy. However, its weight and energy retention ability mean that any Buffalo pilot that cares to climb high (3,000 - 4,000 m) will be able to combat opponents with relative ease. However, they should be wary of adept climbers (such as Bf 109s and the US' own P-47, at least in Arcade) as they are more than a match for the F2A's climb rate. In a dive, the Buffalo can rapidly catch up to virtually anything it faces, and, when it does, a battery of 4 x .50 cal (12.7 mm) machine guns will make short work of any target, save well-armoured bombers such as the B-25 or Ju 88, which an F2A pilot will probably rarely meet.

Discipline is a vital trait needed to master this plane. If you are used to simply engaging with the first opponent you find and turn-fighting, the F2A is not for you, as is much of the US fighter line. The recommended tactic to use with the F2A is Boom & Zoom. At the beginning of the battle, it is vital to climbing - not climbing reduces your energy capabilities drastically due to the low level-flight speed of the F2A - climbing significantly exacerbates performance of the F2A due to its weight and diving capabilities. After attempting a diving engagement on an enemy, whether successful or not, one should always pull out of the engagement shortly after the first attacking pass, so as not to waste speed and/or altitude (a.k.a. energy).

Four M2 Browning .50 MGs are plenty for a 2.7 BR plane - the heavy bullets rip through almost all fighters at this rank. Omni and Stealth rounds are the most effective belts - the Stealth being especially effective due to the M8 API bullets which allow F2A pilots to easily set opponents afire. Against bombers, the capabilities of the M2s are greatly reduced- aiming for engines is the most effective way to combat a bomber. You should always use the boom and zoom tactic as it suits well for Japanese fighters at its rank. However, Japanese fighters will out turn you.

The F2A-3 Buffalo was an interwar to early-WWII fighter aircraft of the United States Navy. Designed for the Navy's use on aircraft carriers, the F2A Buffalo was the first American monoplane naval fighter to enter service, beating the biplane XF4F design (which would later be redeveloped into the monoplane F4F Wildcat). The F2A served during the early days of WWII with the US navy, where it proved to be an ineffective fighter. The aircraft would be retired partway through the war with the development of more advanced aircraft.

In 1935, the Navy issued a requirement for a new monoplane fighter to replace the older F3F biplane naval aircraft. Several firms would design aircraft for the competition, including Brewster, who developed the XF2A Buffalo. Grumman submitted the XF4F, a traditional biplane fighter. After flight testing, the XF2A considerably outperformed the Grumman fighter, which wouldn't be produced in its biplane form, but would later reappear as the monoplane F4F Wildcat. Thus, the XF2A was ordered into production as the F2A Buffalo.

The F2A-3 was the last variant of the F2A to enter production, with 108 aircraft produced in total. The F2A-3 received additional fuel tanks and armour protection, but this made the aircraft significantly heavier and less agile. In American service, the F2A-3 Buffalo proved to be an ineffective aircraft, weaker than the highly-agile A6M Zero in most respects. They would be retired from active service with the introduction of newer, more advanced aircraft including the F6F Hellcat and F4U Corsair.