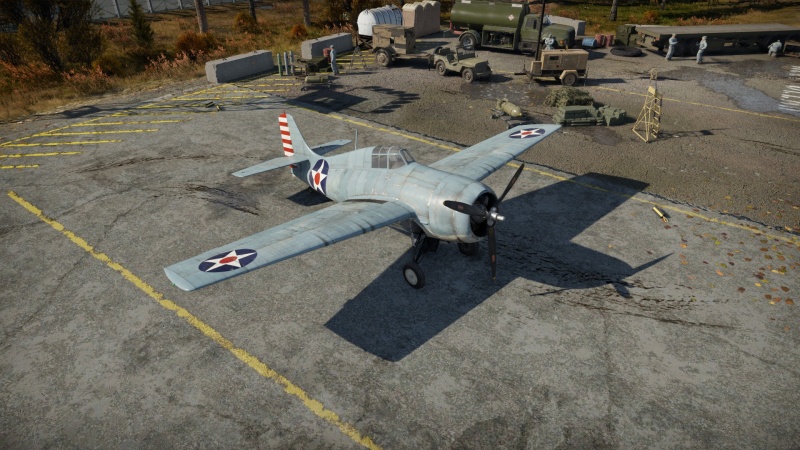 The F4F-4 Wildcat is a rank II American fighter with a battle rating of 3.0 (AB/RB/SB). It has been in the game since the start of the Open Beta Test prior to Update 1.27.

The Wildcat is a sort of middle child between the F2A Buffalo and the F6F Hellcat in the naval tree. While being slightly slower, climbing slower and turning worse than the previous F2A-3 Buffalo you unlocked, the Wildcat has two extra Browning M2s which ups the firepower by a decent amount. The Wildcat is also better at altitude than the Buffalo, meaning it's a better dogfighter at a high altitude. Given its traits, it is recommended to use the Wildcat as a high altitude dogfighter, although its mediocre climb rate makes it difficult to out-climb the opponents you face.

However, a downside to this change is a much lower ammo count per machine gun load. The total ammunition load is the same at around 1,400 rounds, but compared to the F4F-3's 450 rounds per gun load, the F4F-4 only has 240 rounds per gun. As such, the time span of firing is reduced greatly for the gain in increased fire saturation.

The F4F-4 can be outfitted with the following ordnance:

As with any American fighter, you should break into a climb at the start of a match, attempting to reach an altitude of 3,000 to 4,000 m where the Pratt and Whitney R-1830-86 radial starts increasing performance. If you encounter an enemy you know you can outturn, turn fight them and make good use of the rudder.

As you climb, you will encounter enemies that outclass you in many ways such as BF 109 E-3/4s and F-1s, C. 202ECs and C. 205s, Zeroes and the dreaded J2M2. Do not engage with any of these targets. All of the previously mentioned planes will rip you to shreds and almost completely outclass you.

The F4F-4 Wildcat was an improved version of the F4F-3. The main improvements were the addition of a third pair of wing-mounted .50 cal machine guns - for a total of six machine guns, and the Grumman Sto-Wing system, which allowed the outer wings to fold inwards on hinges. This would theoretically allow 5 Wildcats to be stored in the space that 2 would have taken up before, but this didn't quite work out in actuality.

Many pilots disliked the F4F-4, because despite having two more guns the F4F-4 had the same amount of ammunition as earlier models. The 1,800 rounds of ammunition had just been distributed between the guns; the F4F-3 had 450 rounds per gun but the F4F-4 only had 240, decreasing firing time by almost 50%. The extra guns had been added per Royal Navy request. Additionally, the extra guns and folding wings increased weight and therefore decreased performance. The F4F-4 had a lower top speed and climb rate than the F4F-3. As well, the folding wings only allowed an increase of F4F Wildcats in a carrier wing by only 50% - much lower than was hoped.