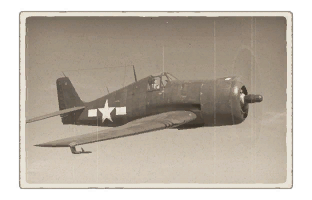 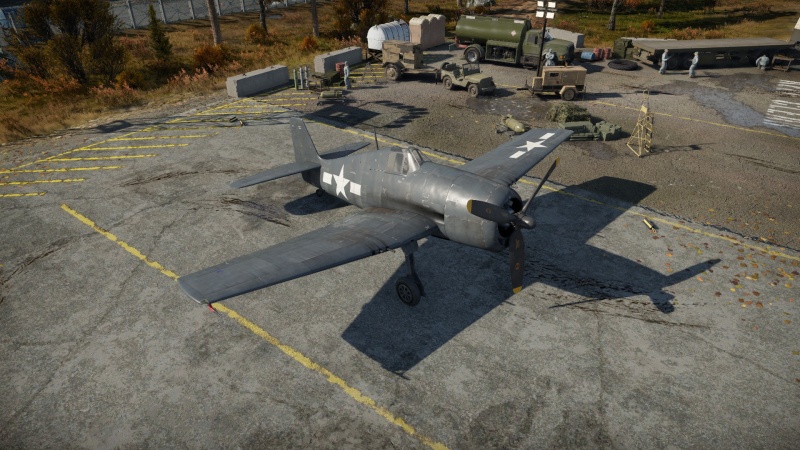 The Grumman F6F Hellcat was used extensively in the Pacific Theater of WWII. The Hellcat was the ultimate answer against extremely manoeuvrable Japanese Zeroes. This plane greatly outperformed the Zero when taking advantage of high speeds and altitudes. The Hellcat can carry versatile payloads which will allow it to be utilized in various operations to include ground attack.

Due to its role as a naval fighter, the F6F-5's take-off distance is small enough to take flight from the carrier decks seen in the game.

Powered by a high-output Pratt & Whitney engine, the F6F-5's flight performance centres around this powerful engine combined with a sturdy fuselage. While the bulk makes the plane quite sluggish compared to some of its contemporaries, the characteristics are still favourable for energy retention. This makes the plane very favourable for Boom-n-Zoom tactics against enemies.

Recommendation:
Performance and machine gun upgrade modules are a must. Unlocking the upgraded ammo belts well increase the lethality of this aircraft. This plane can be a powerful fighter in the right hands due to its performance. Unlocking the performance modules first to increase survivability.

The six machine guns are arranged in bundles of three on each wing. Each is armed with the same amount of ammunition, which means that all guns will fire with each other until empty.

The M2 Browning variant on the F6F-5 Hellcat is that of an earlier version of belts.

The F6F-5 can be outfitted with the following ordnance:

The key to both surviving and owning in the F6F is to keep your speed up and try to be even marginally higher than your opponents. Below 300 km/h (186 mph) it is very sluggish. As with most American fighters, Boom & Zoom is the preferred combat mode for the Hellcat, while its moderate high-speed manoeuvrability can be used to add in a high yo-yo. It has a lot of ammo, but a good aim is still important since boom-n-zoom only allows you a small window of opportunity to hit your target before you have to climb back to altitude. Still, this is an excellent aircraft to practice your aim and tactics with because it's more forgiving than most boom-n-zoom fighters. If you don't have a particularly good aim, a good tactic is to open up at 500 m (0.31 mi), starting with your aim on the aircraft, and then slowly move your aim in front of the target. You won't require as much lead when diving on your target at 600+ km/h (373+ mph).

With dual 1,000 lb bombs and six HVAR rockets armed, the Hellcat is actually a stable game-ending platform in a pinch when the rest of your team is not ground-attacking. With the two 1,000 pounds of bombs and six HVAR or two Tiny Tim rockets, the F6F-5 Hellcat makes a great strike fighter. The two Tiny Tim Anti-tank rockets can also be good for taking out heavier targets. Sometimes, it is useful to save the Cat as your last plane just for that. You can always jettison the rockets and bombs if you're suddenly forced to dogfight, jettisoning the ordnance increases speed as well as climb rate, while also decreasing turn time.

It is incredibly important to use Manual Engine Controls whilst piloting the Hellcat in Realistic or Simulator Battles. The Hellcat has access to three Supercharger gears, each tailored for a different altitude, and each will greatly improve your performance at their appropriate altitudes.

You must climb as high as you can - altitude is life, and once you dive, you can't get it back. Once you're on the deck, you're toast.

The F6F Hellcat was Grumman's next fighter after the successful Wildcat. The F6F was designed from the start to be the ultimate answer against the Japanese Zero. The Hellcat was the planned replacement to the Wildcat since Pearl Harbor. The aircraft was designed from the start to be a much bigger airframe. The plan was to create a carrier-based fighter with more ammo, fuel, and larger wings. The XF6F-1 Prototype was already in the works when the U.S. officially entered World War II. Grumman engineers knew they would have to create an aircraft that was faster and climbed better based on combat experience and data collected from the A6M captured in the Aleutians. The prototype flew in June of 1942 and was powered by a Wright Cyclone R-2600. The aircraft's performance was not satisfactory. The decision was made to replace the power plant with the Pratt & Whitney R-2800 Double Wasp.

The U.S. Navy needed a new carrier-based fighter. The Corsair and the Hellcat were both competing to fill that role. With delays in the F4U Corsair project, the Hellcat took the role as the primary fighter and never looked back. The new Hellcat excelled in nearly every way over the A6M Zeroes it faced. The Hellcat, unlike its opponents, featured self-sealing fuel tanks and additional armour. The Hellcat quickly gained nicknames like "ace maker". The payload options helped transformed the Hellcat into a multi-role fighter that propelled it to legendary status. During its service life, the F6F was credited with the destruction of over 5,200 aircraft. It remained in service as late as 1954.