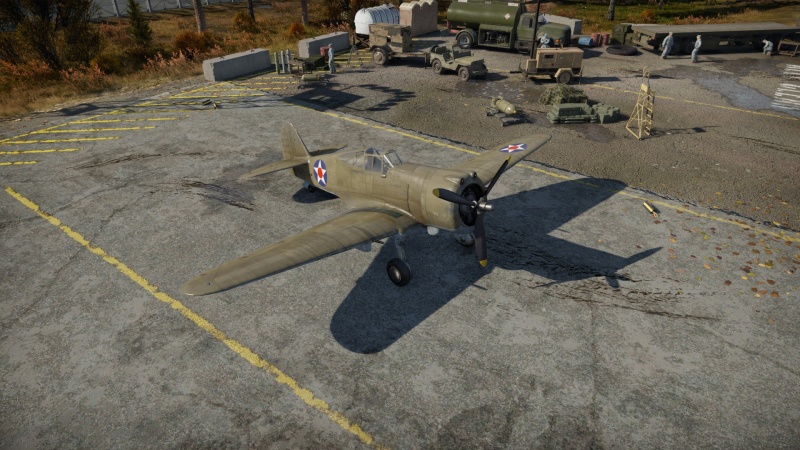 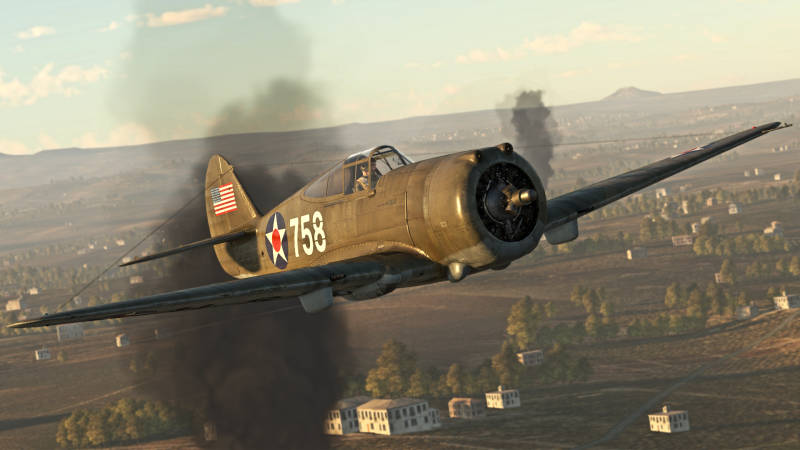 The P-36C is a relatively easy fighter aircraft to fly and requires only a relatively short space to both take-off and land. During World War II the P-36 was ferried over to Pearl Harbor aboard an aircraft carrier from which they took off and then landed at the Army Air Corps base.[1] In the game, due to the very low stall speed, the P-36 can land on an aircraft carrier to a complete stop and take off again. Due to the fantastically low wing loading rate of 23.9 lb/ft2[2], this fighter is an excellent turning aircraft and accompanied by a strong rudder can spiral climb easily, especially during WEP cycles. This aircraft has the advantage of being both a turn fighter and a Boom & Zoom fighter, depending on the situation, type of aircraft which are flying against and mission type. The P-36 will out-turn many fighters of its rank and can prove difficult to follow if attempting to shoot it down. The P-36A and P-36C utilise the same engine, however with the extra two machine guns and associated ammunition, the C model lags slightly behind the A with flight characteristics, but not noticeable enough for the upgrading pilot to realize while manoeuvring the aircraft. The trade-off for more guns vs. slightly hampered flight model is well worth it.

As with many early pre-war fighters, not much emphasis was put on the survivability of the aircraft. The best course of action was for the pilot to not let anyone get behind them. The P-36C's only sources of protection for the pilot is the engine block and the 9.5 mm (angled at 24° for effective thickness of 13 mm), that being said, depending on the engine block to save the pilot may do so at the expense of the engine, thus requiring the pilot to glide back to base if possible or bailout. There are also two unprotected oil coolers if which are punctured, the aircraft will leak oil until depleted eventually causing the engine to seize up.

Armament weaknesses found in the P-36A were addressed when outfitting the P-36C fighter, as the armament of a single 12.7 mm and 7.62 mm machine gun was found lacking. While the engine cowling was already crowded and no more machine guns could be centrally mounted which required wing modifications to install two more 7.62 machine guns, one in each wing. For this aircraft, two machine guns are mounted in the engine cowl and fire through the propeller arc while the other two are mounted one in each wing. Due to the wing-mounted machine guns, convergence is a factor to deal with with the optimal range being 100 - 200 m, anything beyond this will still work, however, the bullets significantly start losing their punch. The increase in armament increased the damage output ability of the fighter, however, the next generation P-36, the P-36G increased the deadliness of the fighter by adding two more wing-mounted machine guns for a total of six guns. Options in ammunition will allow the pilot to select the type best suited for their mission whether it be as an interceptor, ground target hunter or a stealthy pouncer.

Even with all of its power and mobility, the P-36 is a relatively fragile aircraft. Without much armour on the aircraft, many of its critical systems are exposed and it will not take much even from lower calibre machine guns to cause fuel fires, oil leaks and the engine shutdowns, not to mention a knocked out pilot. Situational awareness is critical to potentially know not only where the targets are, but also the enemy aircraft which are manoeuvring into position and ready to pounce. The weakness of only having four machine guns will require the pilot to get in close (50 – 200 m) to make the most of their shots as anywhere past 150 m, bullet penetration drops off considerably.