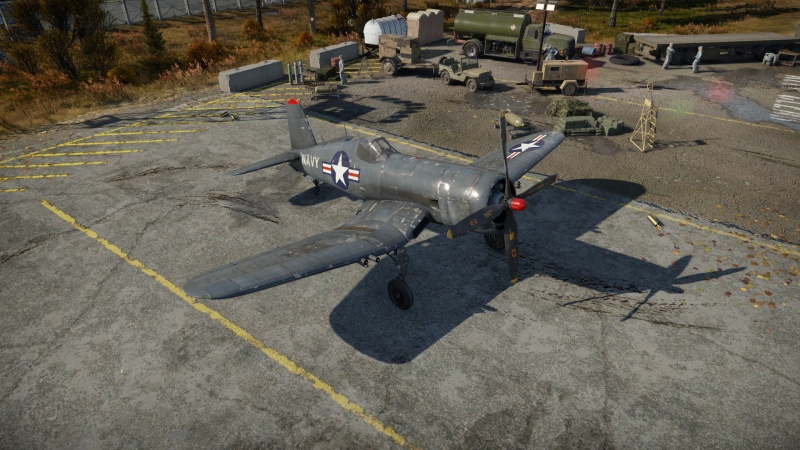 The F4U-4B is similar to the F4U-4 which precedes it, mainly in handling, but the main difference and the reason why it sits at a higher BR is the vastly more powerful armament of 4 x 20 mm AN/M3 cannons and an up-rated engine, giving it much more flexibility in its playstyle.

While it retains the standard Corsair traits of excellent performance in the horizontal, namely speed, energy retention, and instantaneous turn, its improved engine allows some fighting to be done in the vertical. This is to an extent of course and you don't want to try and out vertical a Griffon Spitfire or a Bf 109 K-4 unless you absolutely know what you're doing, but you can easily stall out planes like Fw 190 As which don't excel in the vertical. This is also aided by the flaps which are very good; the takeoff and landing flaps lower the stall speed immensely but rip easily above 250 km/h (155 mph) IAS, and the combat flaps boosting the turning significantly and can be used up to about 450 km/h (279 mph) IAS. Even without flaps, F4U-4B is an impressive turner despite its weight and can turn with many planes at high speeds (above ~500 km/h/~300 mph), at least enough to get a shot off. With flaps it can turn with a surprising number of planes at low speeds, although as before this is to an extent. Also, be wary of the rudder which rapidly loses effectiveness above 550 km/h (340 mph) and makes shots difficult against evading enemies, although this is alleviated a bit by the powerful armament and fairly good roll rate.

The 4 x 20 mm cannons are excellent at inflicting damage and their high muzzle velocity allows for long range snipes. Even very short bursts can be lethal against aircraft. Belts with AP-T shells are quite good against ground targets, even the Air Targets belts can make short work of medium tanks in air battles.

The F4U-4B can be outfitted with the following ordnance:

This plane can easily dogfight with Fw 190 Ds/152s, Tempest Mk Vs, Sea Furies, and similar planes, can dogfight with difficulty with Bf 109s and similar, and should avoid dogfighting unless as an absolute last resort against Spitfires, Ki-84s, A7Ms, N1Ks, and similar. Fortunately, the F4U-4B is usually faster than most planes it can't dogfight. It's far faster than most Japanese and Italian props and all Spitfires up to the Mk 22 at low altitude. In an up-tier against superprops like Tempest IIs, Spitfire Mk 24s, and P-51Hs and F8Fs if you get a mixed battle, you have to rely on coming in with an advantage as with any other plane in an uptier, though this is made easier with the F4U-4B's excellent top speed.

You're best off engaging the F4U-4B at higher altitudes where its performance suffers. You can also try bleeding their energy in hard vertical manoeuvres where it struggles, but be careful while doing this especially at low altitude since a potential opponent can still use the Corsair's stall characteristics combined with its engine power to get a shot off, which can be devastating no matter how short a burst.

The F4U-4B was a modification of the F4U-4. The F4U-4 was based on the F4U-1A Corsair. In order to improve and modernize the Corsair, so it would be able to fight the new Japanese planes in the Pacific, a number of changes were made. One of the major changes was the engine. The Pratt and Whitney R-2800-8W engine was replaced by the more powerful R-2800-18W engine. This -18W engine boosted the speed of the Corsair by up to 46.3 km/h (25 kn, 28.76 mph). When injected with an alcohol/water mixture, the performance could be boosted even further. In order for the propeller to be able to handle the more powerful engine, the propeller had to be changed from 3 blades to 4 blades. Modifications to the fuselage were required, including the addition of a scoop to the lower engine cowling. In addition, the cockpit was completely redesigned. The F4U-4 was armed with six .50 in machine guns, up to 4,000 lbs of bombs and/or eight 5 in rockets.