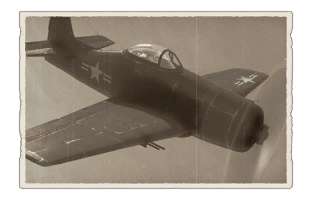 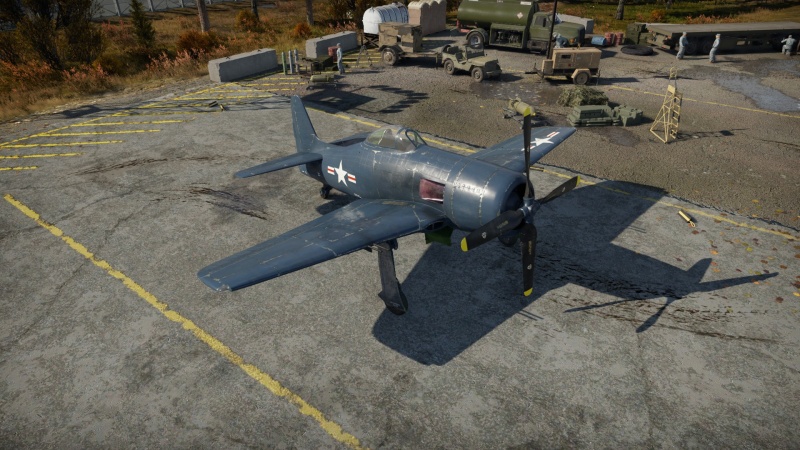 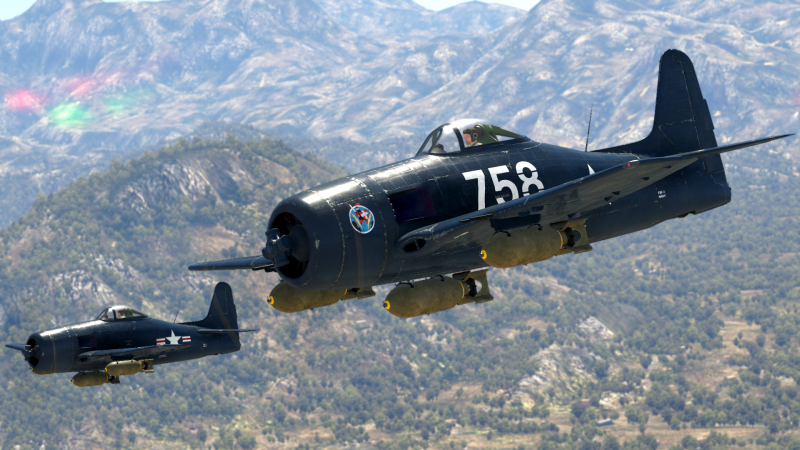 The F8F-1B is truly a worthy aircraft to end the single engine fighter line of the USN branch. Nimble, fast, and with great acceleration, it is sight of fear for the foe's eye. Most of its enemies will be jets and they will shiver as the Bearcat faces them with a 2 km altitude and (sometimes with) speed advantage. With WEP running (War Emergency Power), includes ADI (Water-Methanol Injection) for the big and hungry 2,300 horsepower Pratt & Whitney R-2800 Double Wasp) and modules maximized, the climb rate is well over 35 m/s. However, its main weakness is the Bearcat's very power source: the hot-running R-2800 Double Wasp.

The stock ammo belt for the M3 is great. So don't waste research here. Biggest problem early on is the sluggish behaviour and gun jamming. The latter can be resolved with spending crew points in Weapon Maintenance, which by now in Rank 4 should be already at a decent level. If you're trigger happy, there is bad news: "New 20 mm cannons" are a tier 4 upgrade. Instead focus on the engine upgrades. Especially "Engine Injection" which gives the plane a great boost of performance and turns it into a true bear. The new 20 mm cannons turn the weapons from a shotgun-like spread to significantly more accurate grouping. It is worthwhile to skip the 20 mm belt upgrade and focus on engine improvements until unlocking the new 20 mm cannons upgrade, as the default belts are nearly as devastating as stealth ammo, but with a tracer round added into the mix.

The F8F-1B can be outfitted with the following ordnance:

In Arcade battles the F8F-1B can perform at its prime, which is, accordingly, remarkably. Due to the lack of damage due to overheating and such, the F8F-1B can easily outstrip any piston-engine fighter in a climb once upgraded.

Prior to the "engine injection" upgrade, the 1B performs very well, but not as sublimely as it does with the modification. Thus, climbing and Boom & Zoom match perfectly with the F8F-1B in AB due to its astounding climb rate, speed, acceleration, and weaponry.

Regarding weaponry, fire in very short bursts with the M3 20 mm because they will jam rather quickly. The most ideal belt is "Air targets", as the belt has the most HEF-I shells (together with the stealth belt, but the Air targets belt has an API-T shell instead of a practice shell).

In Realistic Battles, the F8F-1B possesses flight performance, armament, and engine power that are top of its class. However, the F8F-1B's engine tends to overheat after ~2-2.5 minutes of continuous WEP. These poor thermals force the Bearcat to be played more carefully, avoiding long dogfights with enemy aircraft to preserve the engine as much as possible. Another caveat to take note of is the rudder control. Past 680-700 km/h (422-435 mph/367-377 kt), the rudder controls become very stiff and unresponsive. This necessitates careful management of speed, or carefully setting up targets so the rudder's usage is mitigated.

With Air Combat Manoeuvres in mind, the F8F-1B is a surprisingly responsive aircraft. Much like its historical predecessor, the F6F-5, the F8F-1B maintains a competitive turn rate at most speeds below 700 km/h (435 mph/377 kt). That being said, sustained turning engagements are not advised in this aircraft due to the poor elevator response below 350 km/h (217 mph/189 kt). The most ideal tactics to use in Air Realistic battles are Boom and Zoom, combined with wide energy saving manoeuvres in order to pull the opponent into an energy trap.

The F8F-1B will be commonly fighting a range of aircraft from the German aviation tree, which require different methods of engagement to be successful.

Firstly, the Ju 288 C is a frontline bomber with potent defensive armament consisting of four rear-facing MG 131 machine guns in one dorsal and one belly turret, two front-facing MG 131s in a chin-mounted turret, and a single MG 151/20 mounted in a barbette in the tail. Engaging this bomber is best done with head-on attacks at the start of the match, or high speed passes from above - thus minimizing your exposure to the Ju 288 C's gunners.

Against the Focke Wulf Fw 190 D family, the most ideal method of engaging these enemies is to take advantage of the F8F-1B's superior energy retention, combined with superior turn radius at most speeds to bait the Fw 190 D into energy traps. Do not attempt head-on attacks against these, or any other German fighter you see. This is because of the high damage output of their MG 151/20 or Mk 108 autocannons. Though the M3 cannon does have superior ballistics, it is much better to not put your aircraft at unnecessary risk.

To engage the Focke Wulf Ta 152 C-3, it is best to take advantage of the aircraft's largely inferior rudder and elevator response when compared to the F8F-1B. The Ta 152C-3 is able to match the F8F-1B's speed in straight line engagements with ease due to its powerful DB 603 engine, but the German aircraft accelerates more slowly than the F8F-1B despite its good energy retention thus, being easily baited into an unwinnable situation against the F8F-1B. The Ta 152 H-1 requires a similar method to the Ta 152 C-3. However, this variant turns much better than its cousin, at the expense of roll rate, though the issue of poor rudder response remains with this aircraft, as well as worse energy retention due to the much larger wings.

When engaging any of the Messerschmitt Bf 109 G/K variants that face the F8F-1B, it is best to bait them into higher speed energy fights, this is due to the Bearcat's superior control response between 450-700 km/h (280-435 mph/242-377 kt), much more powerful radial engine, and superior power-to-weight ratio. These advantages make vertical engagements against the Bf 109 family the most desirable, as the German aircraft will lose more energy attempting to stay in steep climbs with the Bearcat. However, engaging in sustained turning engagements that go below 450 km/h (280 mph/242 kt) is not advised. This is because the Messerschmitt's leading edge slats allow the aircraft to pull higher angles of attack than the F8F-1B at those speeds and thus turn inside of it.

Engaging the Dornier Do 335 B-2 is arguably the most straightforward. The Do 335 B-2 is a far inferior aircraft to the F8F-1B in every respect, only really being a danger to the American fighter in direct head-on engagements. This is because the Do 335 B-2 is unable to match the flight performance of the Bearcat and is thus will be a sitting duck in most situations.

Engaging the He 162 A-2 and Ar 234 B-2 require different methodologies however. The tactics against them will become far more prevalent when facing later jets in uptiers. The Bearcat faces little danger from the Arado, as it has no offensive or defensive armaments, however can only catch it in an extended chase at low altitude, or in a head-on pass. Be careful of being caught in its bombs' explosive splash range at low altitudes. To engage the He 162, it is advisable to bait the aircraft into a low energy state, due to the poor acceleration and throttle response from early jet-powered aircraft. It is not advisable to run from the Heinkel either, as the He 162s can catch the F8F-1B in an extended straight line engagement.

Soviet and Chinese aircraft can also be commonly seen in battles.

The Yak-3U and Yak-3 (VK-107) can pose significant threat to the F8F-1B. These aircraft are incredibly manoeuvrable, and retain energy as well as the F8F-1B, so are easily able to match it in any engagement that doesn't involve straight-line speed. However, their major weakness is their low redline speed, which allows the F8F-1B to dictate the engagement, and escape if need be. The Yak-9UT is similar to the Yak-3s listed, however it is less manoeuvrable and more heavily armed. The Yak-15 is essentially a Yak-3 VK-107 in regards to performance and redline.

Engaging the Tupolev Tu-2S and Tu-1 is best done in a similar manner to engaging the Ju 288 C, with the addition of avoiding direct head-on passes due to their powerful frontal armaments.

Commonly seen Japanese and Italian aircraft are largely similar to the previously mentioned aircraft, with one major exception: the A7M2.

The Mitsubishi A7M2 is much slower than any other aircraft mentioned but is extremely manoeuvrable. It has a great power to weight ratio and is able to turn inside of the F8F-1B at any speed. Engaging this aircraft is a matter of speed management.