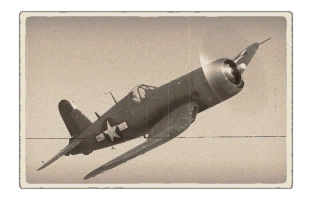 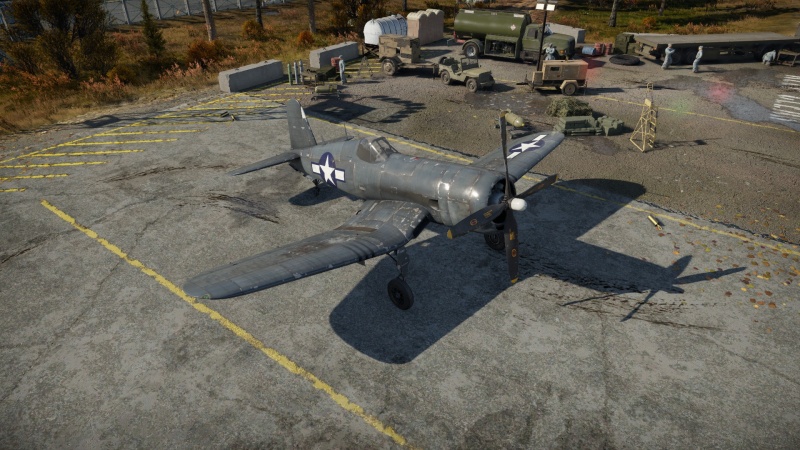 The F4U-4 is excellent at Boom & Zoom fighting. Its high energy-retention and acceleration make it the true pinnacle of the Corsairs. Although you don't get an air spawn, the climb rate of the F4U-4 makes up for that. When engaging an enemy, try and maintain an altitude advantage while keeping your speed up; speed is life, altitude is life insurance. When you gain an altitude advantage, dive on your opponent and fire. The engine lacks fuel injection, so experiencing negative G forces is likely to temporarily shut down the engine. The six .50 calibre (12.7 mm) machine guns, while not as destructive as the quad 20 mm cannons of the F4U-4B or the eight .50 calibre (12.7 mm) machine guns on the P-47, will destroy any lighter aircraft with ease, with plenty of ammunition that allows spraying (with firing discipline) and still being dangerous in the later stages of the match.

The F4U-4 can be outfitted with the following ordnance:

Being true for the entire Corsair series the most distinctive features of this plane is its huge R-2800-P&W 18 Cylinder Radial engine and the inverted gull wing.

One advantage of the inverted gull wing:

The wing is impossible to rip in a dive as long as you don't pull a turn greater than 11 G's, which is almost impossible because the aircraft does suffer from compression above 800 km/h.

In Simulator battles, the F4U-4 is exceptionally good at dogfighting due to its forgiving flight characteristics and excellent visibility. The six M2 Brownings are also easy to aim and can be sprayed for quite some time. Due to its stable nature, you can out-turn pretty much any opposing aircraft if it comes to it, though boom-and-zoom tactics are what you should be sticking to. Enemies especially worth noting are most Soviet and Japanese fighters. Soviet fighters can keep up with you in a dogfight quite well and the Japanese' turn rate is something to watch out for. On the other hand, however, both Soviet and Japanese fighters get set on fire quite easily, and once you get a good burst in, you have (in most cases) secured the kill.

The F4U-4 was based on the -1A Corsair. In order to improve and modernize the Corsair, so it would be able to fight the new Japanese planes in the Pacific, a number of changes were made. One of the major changes was the engine. The Pratt and Whitney R-2800-8W engine was replaced by the more powerful R-2800-18W engine. This -18W engine boosted the speed of the Corsair by up to 46.3 km/h (25 kn, 28.76 mph). When injected with an alcohol/water mixture, the performance could be boosted even further. In order for the propeller to be able to handle the more powerful engine, the propeller had to be changed from 3 blades to 4 blades. Modifications to the fuselage were required, including the addition of a scoop to the lower engine cowling. In addition, the cockpit was completely redesigned.

The armament of the F4U-4-4 corsair was six .50 in machine guns, up to 4,000 lbs of bombs and/or eight 5 in rockets. There were multiple variants of the F4U-4. There was the F4U-4B, which had only slight modifications for the Fleet Air Arm of the Royal Navy. They were never actually delivered to the Royal Navy, as the US kept them instead.The F4U-4C was another variant, which had four 20 mm cannons instead of six .50 in machine guns. There were also two night fighter variants, the F4U-4E and the F4U-4N. The -4E had an APS-4 search radar on the starboard wing tip, while the -4N had an APS-6 search radar instead. Both night fighter versions replaced the six .50 in machine guns with four 20 mm cannons. There was also F4U-4K, an experimental drone variant, and the F4U-4P, a photo reconnaissance variant.