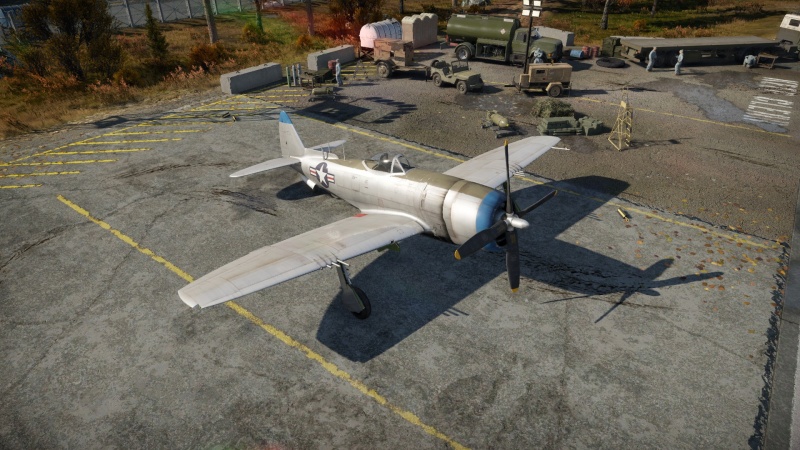 First and foremost, the Offensive 12 mm should be researched. The next step should be to rush Compressor, Engine, and Engine Injection. The proceeding choice should be between the New 12 mm MGs or the G-Suit (if you have weaker pilots, choose the G-Suit first over machine guns). The remaining modules can then be unlocked in any order desired.

This plane features late war belts, so the difference in damage output between belts is minimal. The best belt in damage output stands as the Tracer belt, followed by Universal; which is a good mixture between tracers and stealth rounds, then followed by the Stealth belt.

How to offensively engage an enemy aircraft: From the start of the match you want to be gaining altitude. Side climbing is heavily recommended, as many planes at the P-47's BR climb much faster vertically. Once at a high enough altitude, the P-47's greatest strength is its speed. It has great acceleration and great speed at most altitudes. From there your main operation of attack will be the simple Boom & Zoom tactic, making good use of its amazing energy retention. However it isn't strictly limited to this role. The P-47N has very strong elevator and rudder authority. While it is not the most recommended tactic, if you are at a higher speed you can dogfight most planes for short periods of time, so long as you make use of vertical space as well as horizontal while you do it and watch your speed. Engaging in turn fighting is not recommended because most enemies you will be facing can out-turn you easily.

Four P-47D-27-RE airframes were taken off the production line at Farmingdale to be fitted with the Pratt and Whitney R-2800-57(C) engine and a CH-5 turbosupercharger. These aircraft were designated as the YP-47M. The new power plant provided a greater 2800 up at 32,500 ft on war emergency power with water injection. These airframe were the prototypes for the P-47M Thunderbolt.

It became clear that operations in the Pacific theatre required greater operational range than in Europe, so the third YP-47M airframe (serial 42-27387) was modified in mid-1942. The wing was given a larger span, and the wing surface area was increased. One 93 US gallon fuel tank was fitted in each wing, a first for the P-47 family. The total amount of fuel that could be carried with external fuel tanks was 1266 US gallons, giving the aircraft a range of 2350 miles. The prototype was designated as the XP-47N.

The wing design increased the size of the ailerons and included squared-off wingtips. The dorsal fin was also taller than on earlier P-47s. These changes allowed an increase in roll rate and manoeuvrability, but also increased the weight significantly. Larger landing gear had to be fitted to cope with the increased weight, which increased the weight further. The maximum weight that resulted was in excess of 20,000 lbs.

The P-47N, despite the more powerful power plant and other improvements, was much heavier than the P-47M. As such, the performance was actually lower than that of earlier models. The increased range, though, was more important in the Pacific theatre than was performance die to the nature of the missions assigned to the P-47N in that theatre.

The P-47N saw service in the Pacific theatre during the last year of the war. They were used to escort B-29 Superfortesses on long, overwater flights - particularly from Saipan to Japan. After World War 2, P-47s were used by the USAAF and then USAF until 1949, and the Air National Guard until 1953. It was redesignated as the F-47 in 1948.