Boom & Run is the name of a playstyle which aims for an attacking aircraft to take advantage of a high energy state in order to attack (Boom) an enemy target and avoids any prolonged fighting by immediately extending or continues diving (Zoom) in order to create distance between the aircraft as quickly as possible. This manoeuvre is favoured by aircraft which maintain a relatively high rate of speed after an encounter. This type of fighting style is prevalent with twin-engine propeller-driven fighters but is mainly found to be so with jet fighters.

The main advantage of Boom & Zoom tactics is the ability to disengage immediately from an attack and climb to a higher altitude, however, this can sometimes leave the zoom climber vulnerable to attacks as they near their target altitude and as their speed drops with their kinetic energy converting to potential energy. Boom & Run utilises the speed of the aircraft during a dive to allow for an attack on a target but also allows for disengaging with superior airspeed either in the horizontal or continuing in a shallow/steep dive. This allows the attacking aircraft to dictate the terms of engagement as they have sufficient distance between them and the target to manoeuvre around for another shot without exposing their aircraft to the dangers of a pursuing aircraft which has not caught up.

Boom & Run aircraft can take advantage of maps with slower aircraft in which they are able to speed through the battlefield and chose targets without fear of being intercepted by slower aircraft allowing for the faster fighter to dictate the terms of their fights. This type of condition is more prevalent on lower rank maps with earlier and slower aircraft. In this type of fighting with propeller-driven aircraft, it is to the pilot's advantage to exercise manual engine controls (MEC) adjustments to maximize the effectiveness of the engine and potentially edge out target aircraft which let the computer do all the work for them, albeit at a less effective level. 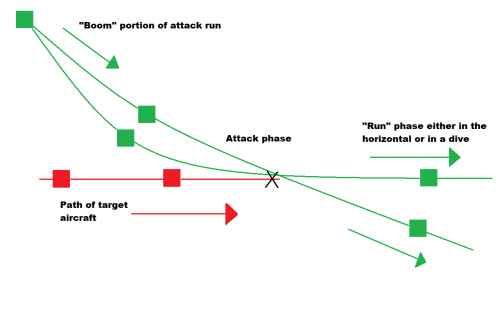 Everything from the setup to the attack follows the guidelines of Boom & Zoom. The difference starts after the initial contact between attacker and target:

Situational awareness is key when it comes to executing any tactical manoeuvre, especially Boom & Run. Typically Maneuvering into the attacker followed by a corkscrew will create a difficult target for the attacking aircraft to get sights on and during this, the faster zooming aircraft may even overshoot the target.

A smart Boom & Run pilot will avoid head-on attacks as while in one, banking either to the right, left, pulling up or down will start to bleed the energy they have been hoarding turning their zoom aircraft into a severely sluggish aircraft. Scissor or corkscrew manoeuvres typically will provide a difficult if not impossible target to hit and due to the defending aircraft's lower speed, the attacker may overshoot and then turn the tables and become a target themselves.

Important is having a very high top speed at the target's altitude. Further, each aircraft should have enough firepower to take out the enemy in one blow.