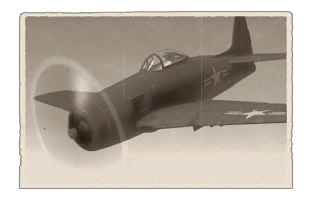 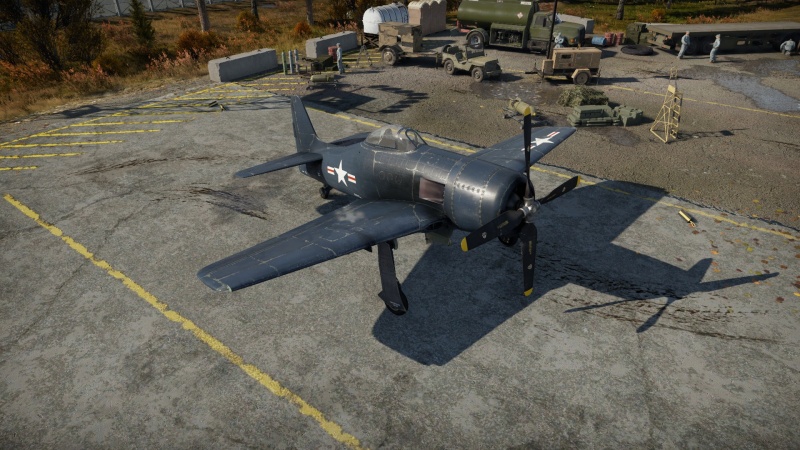 The F8F-1 is an all-purpose light fighter-bomber, and excels as such. Although it may seemed incredibly outgunned with only four M2 Brownings, the Bearcat can be a more than decent fighter in the right hands. The plane was developed to achieve two things: the best possible climb rate and the ability to land on escort carriers.

The in-game F8F-1 retains many advantages of the real-life counterpart. The F8F has very good acceleration and climb rate, thanks to its powerful engine. Because of that, it can quickly gain an altitude advantage over its opponents. Thanks to its high top speed, good wing endurance, and good energy retention capabilities, the F8F is perfectly suited to energy fighting. A Bearcat pilot should avoid low-speed dogfights, instead opt for a diving attack from above.The Bearcat is also a very hardy aircraft able to sustain several hits from enemy cannon and machine gun rounds before being decommissioned. The phrase "Grumman Ironworks" comes into play on the Bearcats just like their previous works; The F3F, The F4F Wild Cat, and the F6F Hellcat. Therefore you shouldn't be too wary of 13-15 mm. 20 mm Hispanos and 30 mm Rhein Borsig series guns are your biggest threats in terms of damage.

The main issue with the F8F-1 is its armament. With only four 12.7 mm M2 machine guns, the F8F-1 is lacking especially when compared to the succeeding F8F-1B that has four 20 mm M3 autocannons. With a relatively low fire rate and low damage, pilots must make their shots count. Unlike most other planes equipped with the M2 Brownings, the Bearcat can utilize M20 API-T rounds. These rounds excel at setting targets aflame. Precise aiming is key, specifically targeting the enemy aircraft's engine or pilot. Aiming for the fuselage is less effective as unlike the P-47D, which has eight M2s which can chew through aircraft fuselages by hurling twice as many bullets down range. Meanwhile the measly 4 x M2s Bearcat will pepper the hull and simply be absorbed. And unlike other Browning armed airplanes, it has mediocre ammo load of only 1250 rounds.

The M2 Browning machine gun by this rank is a very familiar machine gun to most American players. The usage of the M20 API-T rounds in the belts available makes the F8F-1 able to dish out similar damages to that of other Rank III-IV fighters with the M2 Browning armaments.

However, the mounting of the armaments on the F8F-1 has some downsides. The F8F-1 only comes with four machine gun totals, two per wing, compared to the usual six machine guns in American fighters. Not only that, the F8F-1 guns come with less rounds per gun in the wing. This means the F8F-1 overall loses out in firepower and firing time available with the click of the trigger.

The F8F-1 can be outfitted with the following ordnance:

In modes outside of Arcade Battles, the F8F-1 releases some suspended armaments in pairs rather than singular. The Tiny Tim rockets are both fired at the same time, so the pilot will only have one chance to hit the target. In configurations with multiple bombs, the wing-mounted bombs drop off first before the fuselage-mounted bomb.

This aircraft is best when used as an energy fighter; however, unlike other American planes, it doesn't fulfil the Boom-and-Zoom role very well because of lacking armament and rudder lock-up above 720 km/h.

Originally designed to achieve best possible climb rate, this aircraft sacrifices almost everything else, including armament, supercharger, fuel load and radiator. However, as it was also made to be able to use escort carriers, it is also small and durable.

This aircraft has great climb rate of 29 m/s in Air Realistic Battles (spaded and with minimum fuel) as well as great acceleration; these two traits should be used accordingly for the plane's best performance. At the beginning of the match, climb into the battlefield, and attack the opponents with the highest energy. If there is an enemy above you, disengage using your great acceleration. Do not be afraid to attack lower enemies, as this plane's optimal altitude is below 1,000 m. It is also quite fast in a straight line, especially on low altitudes.

The bad low speed manoeuvrability isn't really an issue given the plane's acceleration.