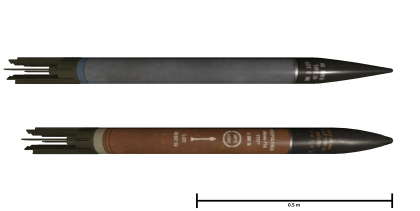 The SNEB type 23 rocket for some will appear to be a trade-off an extremely fast rocket with a significantly small HEAT load, but often come in loads of 100+ per aircraft and can effectively be used as a 68 mm cannon. This weapon is meant to be fired in salvos.

Each projectile has a total weight of 5 kg (11 lbs) and of that, only 340 grams of RDX/TNT mixture of explosives: approximately equal to 435 g of TNT explosives. This rocket rips through the air at 651 m/s, making it one of the fastest rockets in-game.

The small calibre of these rockets means that user may struggle with HEAT warheads because of its overall tiny post-penetration effect, often resulting in failing to destroy any non-hull breakable tanks. Often this leads to being necessary to make multiple passes to eliminate the heavier opponents and ruining the element of surprise. Overall, due to the small amount of explosives packed inside each rocket, there is very little splash damage which will affect many portions of a tank and it is essential to aim for a direct hit into the crew compartment where any effective splash damage will be maximized against soft targets.

This rocket has no direct competition with any other projectile because it marks a place, where it sits between rocket-powered, and fired shell. It has quite low damage for a rocket, however, it creates more damage when compared to a solid shell fired from aircraft cannon. When compared to other rockets of its time, they are typically significantly slower, making it difficult to compare it across the board directly to other secondary weaponry.

The SNEB type 23 is quite efficient when dealing with enemy ground targets in Ground Realistic Battles, due to the large number of rockets stored inside each pod. If those rockets are used carefully significant damage if not destruction is guaranteed when they strike their target en masse.