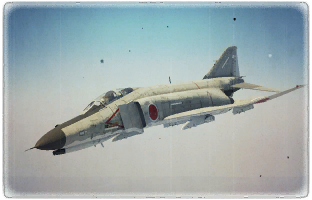 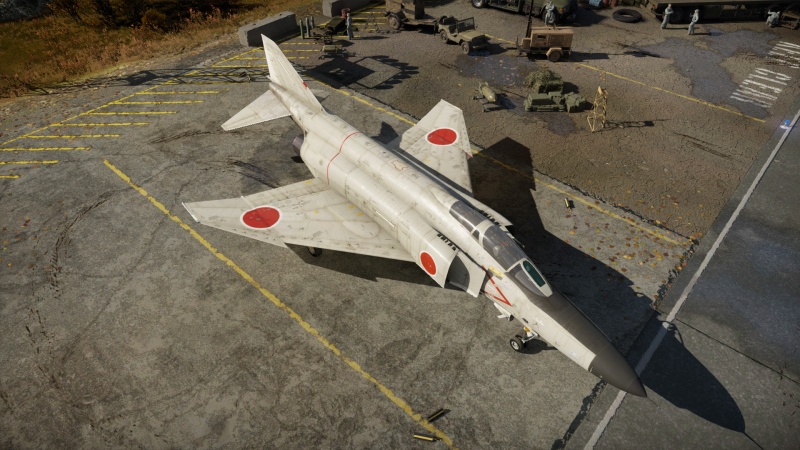 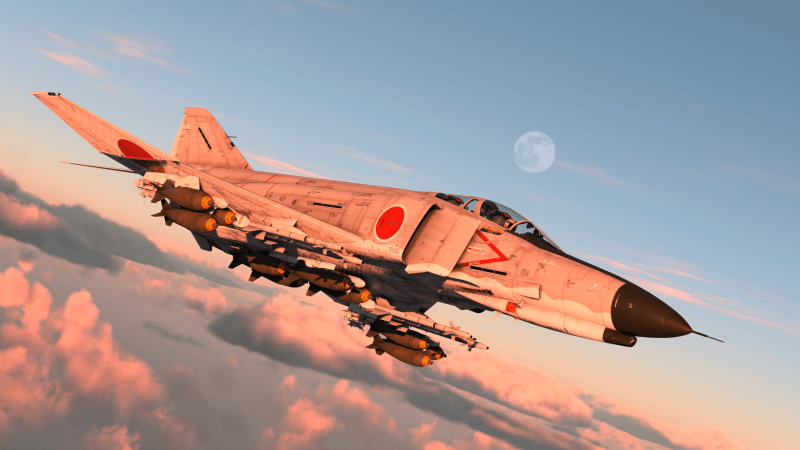 The F-4EJ Phantom II is a rank VII Japanese jet fighter with a battle rating of 11.0 (AB/RB/SB). It was introduced in Update 1.97 "Viking Fury". 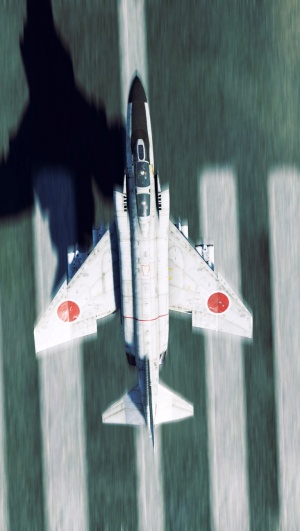 The F-4EJ Phantom II is armed with:

Due to this cannon's high rate of fire (only 6.60 seconds of continuous fire), trigger discipline is a must.

The F-4EJ Phantom II can be outfitted with the following ordnance presets:

The F-4EJ Phantom is well-suited for any in-game situation. For attacking ground targets, the plane is armed with an assortment of bombs and rockets, and against air targets, players may employ the vehicle's deadly air-to-air missiles and frontal cannon. If desired, three externally-mounted gun pods may be equipped, but note that these may not be useful in all situations. Although they will undoubtedly increase the vehicle's destructive capabilities, they also appreciably hinder flight performance. In many situations, one front-facing cannon is all that is required to dispatch an opponent aircraft. As for the missiles, the ones used by this plane are among the best in the game, comparable to the R-60 missiles equipped by the MiG-21MF (Germany) and the MiG-21SMT.

Thanks to its leading-edge flaps, the F-4EJ is more manoeuvrable than the F-4C Phantom II. Because of this, it can calmly deal with more intense dogfight situations than its predecessor. As with all top-tier fighter jets, extended turn fights should be avoided since they bleed much speed out of this heavy aircraft and leave the pilot defenceless against nearby vultures. Specifically, watch out for the J35D Draken, which will beat any of its contemporaries in an extended turn, and also keep an eye on nearby Mitsubishi T-2 pilots: although the T-2 doesn't do well in extended turns, it can pull a significant angle of attack in the first few moments of a turn fight. The F-4E Phantom II can also be considered a threat as it includes leading-edge slats not found on the F-4EJ.

It is advised to side climb up to at least 8,000 m before engaging the enemy to ensure a favourable position at the start of the battle.

F-4EJ "Samurai Phantom" was a jet fighter aircraft that saw service in the JASDF (Japanese Air Self Defense Force) from 1971 until 2020. At the end of 2020, the F-4EJ will be replaced by the F-35A Lightning II.

In 1968 Japan made it public that they would update their JASDF with the F-4 phantom. Being one of the only countries to acquire the permissions to build the plane in their own Factories, Japan started to develop the F-4EJ at Mitsubishi Heavy Industries. Due to post WW2 sanctions and restrictions, Japan was not allowed to equip any air-to-surface capabilities to the aircraft. As such, the F-4EJ would be made without the AN/AJB-7 bombing computer system.

McDonnell Douglas built the first 2, F-4EJ prototypes with Mitsubishi Heavy Industries building the remaining Phantoms. They did, however, import RF-4EJ from McDonnell Douglas over the 10-year span of production. Mitsubishi Heavy Industries would build the very last F-4 in the world, nicknamed "The Finale Phantom", on the 20th of May, 1981. It served with the 306th and 301st Tactical Fighter Squadrons. 127 EJ variant Phantoms were built.

The first squadron equipped with the new F-4EJ would be the 301st Hikotai, in August 1st 1972. In October 1973, the 301st would be deemed operational with the Phantom, having 14 Phantoms in their squadron. On October 30th 1978, five years after the squadron was equipped and trained in the Phantom: the 301st was designated as JASDF Quick Ready Alert force. In 1979 they would be the first F-4EJ to intercept another aircraft when a Soviet T-95 was deemed a threat on February 21st of that year. Ironically the same day of the intercept is when Japan launched the Hakucho X-ray satellite & Corsa-B.

In July of 1984, after the post-war sanctions were dropped, Japan put together plans to upgrade its F-4EJ Phantoms. In 1989 their F-4EJ Phantoms were updated starting with the 306th Hikotai. The new Phantoms were equipped with APG-66J pulse-Doppler radar, which allowed the Phantoms to carry out air-to-ground and Air-to-Ship capabilities while being lighter, smaller, and more efficient than the old radar. A new computer and heads up display was added to Phantom, allowing them to bring the Phantom into the 21st century. Additional upgrades to the pylons allowed the new Phantoms to be equipped with the F-15 fuel tanks, which could sustain more G forces than the current fuel tanks being used. And with the adoption of the Westinghouse AN/ALQ-131 countermeasures, it allowed the pilot to adapt and counter any threats on the modern battlefield quickly. These upgrades were desperately needed for the JASDF as their Mitsubishi F-1 and F-2 did not have the range needed to adequately defend their countries territory if war ever arose. 96 Phantoms were upgraded and designated as F-4EJ Kai (Kai means "Modified" in Japanese).

The F-4EJ Phantoms were equipped with 3 different colour schemes. Blue Camo, Green Camo, and Grey. 127 aircraft were built, with 8 squadrons adopting the plane. The F-4EJ was decommissioned in 2020 to adapt to the F-35A Lightning II. 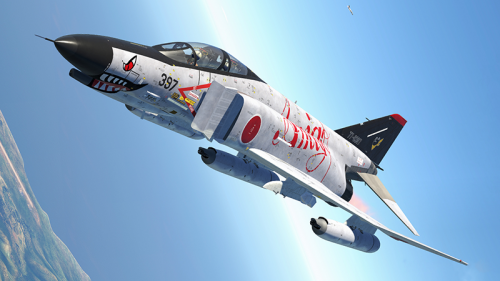