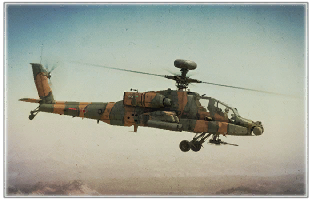 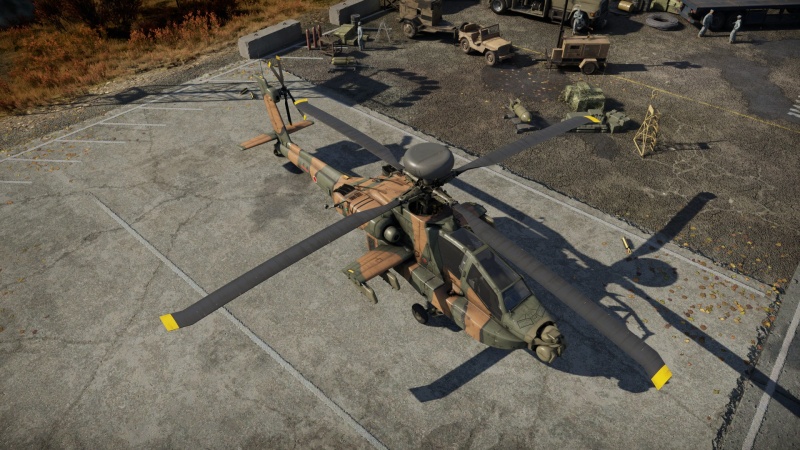 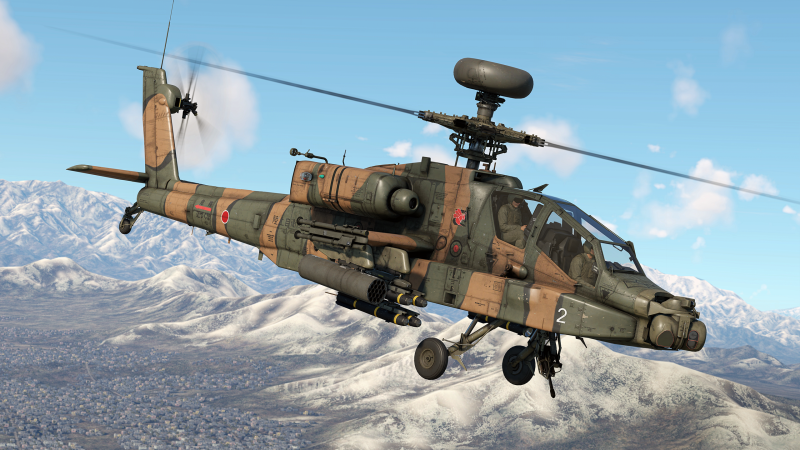 The AH-64DJP is a rank VII Japanese attack helicopter with a battle rating of 10.7 (AB) and 10.3 (RB/SB). It was introduced in Update "Starfighters".

The AH-64DJP sports a great manoeuvrability, an incredible acceleration and overall provides a great speed of up to 320 km/h in arcade and 295 km/h in realistic and simulator game modes. As fast as the United States Army, AH-64D Longbow and slower than the British Army, AH Mk.1 variants of the Apache, the AH-64DJP is still able to perform manoeuvres other helicopters can only dream about, from barrel rolls, flips to loops which allow it to evade enemy missiles with ease.

The AH-64D Apache longbow, has only limited armour protection installed with bullet proof glass only being installed on the pilot windscreen. The helicopter uses Kevlar boron carbide, composite martial which is limited only to instrument, floor and side panels around the cockpit. It does not provide the same level of protection as seen on other helicopters such as the Mi-28N.

The AH-64DJP is armed with:

The AH-64DJP can be outfitted with the following ordnance presets:

The AH-64DJP only has the following Defensive systems installed:

When unlocked, countermeasures are not installed - this requires the Flares/Chaff module (tier I) to be researched and installed, this provides up to 30 countermeasures. The last module called AIM-92 (tier III) allows for the installation of a maximum of four AIM-92 Stinger missiles, which two are mounted on each wing tip, 30 countermeasures & IRCM module.

Important note: unlike the American and British brothers, the AH-64DJP lacks a MAW (missile approach warning) system. This means that the AH-64JDP player should keep an extra eye on SPAAs and incoming SAMs by himself, as without MAW missiles must be spotted and countermeasures deployed manually.

The AH-64DJP is very similar to the AH-64D Apache. The only difference is the lack of an ability to carry an advanced MAW (a system that alerts the pilot to incoming missiles, Missile Alert Warning). The Apache is an excellent helicopter for attacking ground targets, and can also hold its own against many enemy aircraft. Through adequate use of cover, teamwork, and game sense, the Apache can easily dismantle enemy teams. An Apache pilot must understand all of the tools at their disposal.

Additionally, it is important to know when to use flares. Flares are extremely effective against heat-seeking missiles, but useless against any other missiles. It is the responsibility of the Apache pilot to recognize the threat and decide whether to use flares or not. For Apaches with MAW (missile approach warning), there is an option for flares to be dispensed automatically.

The radar of the Apache should be used as a secondary tool when engaging ground targets. As of update 1.99.1.45, the radar is not effective in obtaining target lock for ground vehicles. The AGM-114L radar guided Hellfire is not in the game, so guidance of Hellfires should be done by using the FLIR thermal imaging camera to lase targets. However, the radar is still useful in detecting enemy aircraft. By using the multi-function menu to switch radar mode, the radar will begin to search for air rather than ground targets. Keeping track of enemy aircraft is vital to survival in the Apache, as any plane can make quick work of the Apache if the helicopter is unprepared.

The Apache is surprisingly potent in air-to-air combat. Engagements should be conducted primarily through the use of the Stinger missile. The Stinger is a simple but effective air-to-air missile. It has an excellent seeker head and can obtain all aspect lock on almost any air target within 3-5 km (even propeller aircraft with a low heat signature). However, the Stinger can be easily fooled by flares or outmanoeuvred by a fast enemy aircraft. The best way to use the Stinger against enemy aircraft is when they are heading directly towards you. If fired at the right second, most enemies will struggle to dodge a Stinger.

The AH-64D was selected by the Japanese Ground Self-Defense Force (JGSDF) in 2001, with a requirement for about 50 helicopters. 50 were ordered, and they were built by the Japanese Fuji Heavy Industries as the AH-64DJP (JP standing for Japan). The first AH-64DJP was delivered in 2006, but the order was cancelled after the delivery of only 13 helicopters. The AH-64DJP has the possibility of equipping AIM-92 Stinger air-to-air missiles (AAMs).

In 2017, it was announced that the AH-64DJP helicopters were to have their targeting systems upgraded by the American Lockheed Martin defense firm. According to a press briefing from April 26 of 2017, the upgrade was to the Modernized Target Acquisition Designation Sight/Pilot Night Vision Sensor (M‑TADS/PNVS). The M-TADS is the laser designator that allows the targeting of the AGM-114 Hellfire missiles, while the PNVS assists with safe flight in day, night, and adverse weather missions. The contract was for the delivery of 14 Modernized Day Sensor Assembly (M-DSA) laser designator kits. The M-DSA increases the reliability of the laser designator and also increases the precision of the system. Additionally, Lockheed Martin's Apache sustainment team was to provide performance-based logistics support to the JGSDF under a separate three-year contract. Japan was the first Apache operator to receive the M-DSA upgrade. 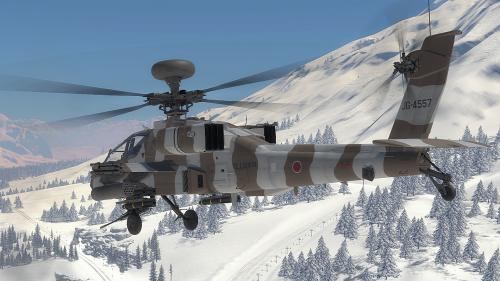