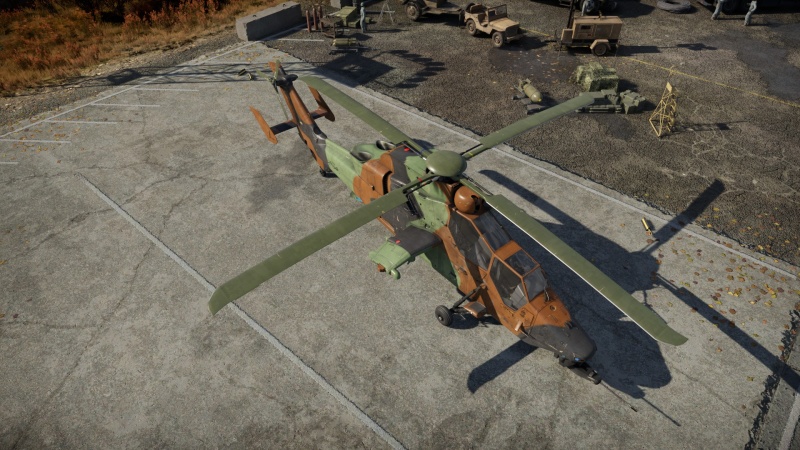 This is one of the best-protected helicopters in the game, thanks to the composite tub around the crew and the firewall separating the 2 engines. To make use of this, when attacked by plane, the best option is to face it frontally to create the smallest possible area to hit. But like every helicopter damaged near engines, the main rotor or tail (OTOMATIC's rain of explosive shells is very dangerous) can be taken down fairly quickly.

The 30 mm cannon only fires high explosive ammo (4 mm penetration), so it is advised only to use it against aircraft and light-armoured, open-topped vehicles.

The EC-665 Tiger HAD can be outfitted with the following ordnance presets:

The MAW system allows for 60 Flares to be installed, along with warnings that missiles have been launched. The ATAM allows for the Mistral air-to-air missile to be installed, these are installed on each wing's hard point, which means 50% of the available hard points are used by the mistral air-to-air missiles, meaning the suspended armament are reduced by half. However, the Mistral missiles are one of the best missiles in the game, able to destroy anything which it locks on to.

For Realistic and Simulation Battles, the best tactic is to stay as low as possible and at first perform reconnaissance. If you start with the helicopter, your first goal is to find and take down enemy helicopters on flanks (don't bother on ones over the battlefield, as you will most likely be destroyed by anti-aircraft fire). It is best to use flares before you think you might need them, as firing them too late are a very common mistake that helicopter pilots make, as when the red launch is an indication that it already may be too late.

The second task is to find good flank position or behind if possible (watch out for helipads anti-aircraft fire) spot to scan for potential ground enemies. Targeting sight on top of the cabin called STRIX gives the possibility to stay low and watch the area around. Use thermal vision, but don't hesitate to switch back to normal view (especially while shooting HOT-3 missiles, which might cause light-bloom and obscure your view in thermal-mode). The Tiger can carry up to 8 x Hellfire missiles. The biggest advantage of AGM-114 is the fact that while shooting they do not give up and will continue to seek the enemy's helicopter position until the fuel runs out, unlike others directly shot ATGMs. In terms of effectiveness, it can be very deadly but only when know how to use it, however since Hellfire attacks from the top it might be hard to hit moving targets with it. The best way is to aim and shoot behind or before the target and in the last moment re-aim on the enemy (typically around four seconds before hit-this technique requires practice). This might make your chance higher to directly hit the enemy on the move. Once again stay low, between buildings, trees, almost on the ground if necessary, listen to the sky for planes sound. Don't stay in gunner's view too long. Watch what's going on around you all the time. Eurocopter Tiger HAD has all the tools to fight with air and ground and to survive. Use all tools, bind all keys for easy access (flares, hoover mode, aim, and launch AA mistrals). It's a high learning curve, high reward, deadly machine.