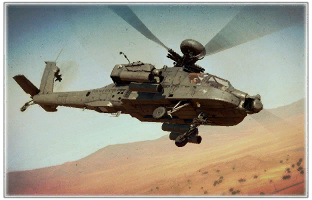 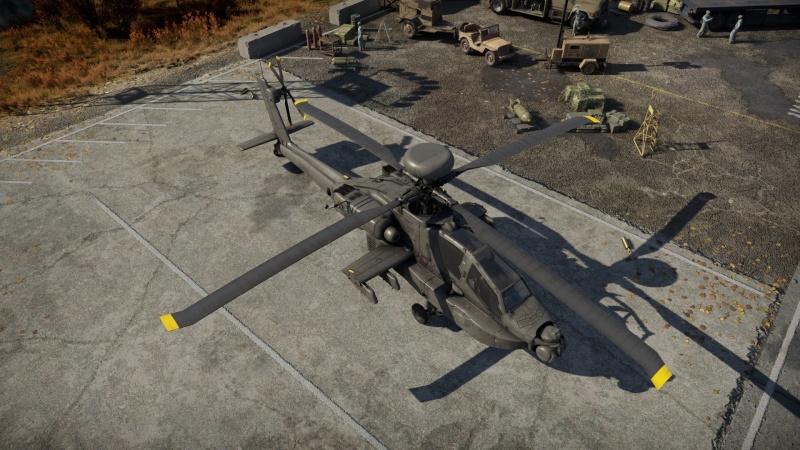 The AH-64D Longbow, provides great manoeuvrability, incredible acceleration and overall providing a great speed of up to 319 km/h in arcade and 295 km/h in realistic and simulator game modes. It is as fast as the Japanese AH-64DJP but the title of fastest AH-64D belongs to the British Army variant called the AH Mk.1. The U.S. Army AH-64D Longbow is able to do manoeuvres other helicopters can only dream about, from barrel roles, flips to loops. Which allow it to evade enemy missiles with ease and surprise, poor enemy tankers who will be helpless to defeat it. 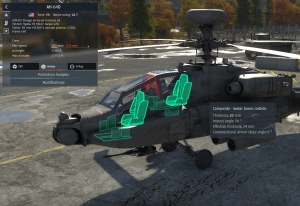 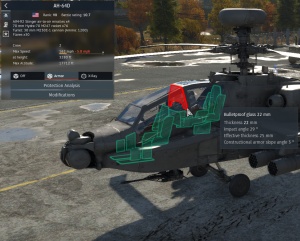 The AH-64D Apache longbow, has only limited armour protection installed with bullet proof glass only being installed on the pilot windscreen. The helicopter uses Kevlar boron carbide, composite martial which is limited only to instrument, floor and side panels around the cockpit. It does not provide the same level of protection as seen on other helicopters such as the Mi-28N. 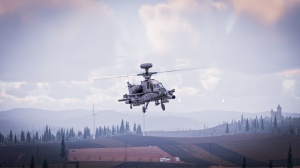 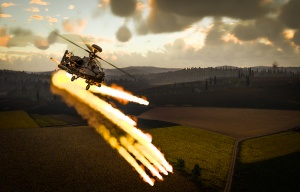 AH-64D dispenses flare series as a countermeasure against heat-seeking missiles.

The AH-64D can be outfitted with the following ordnance presets:

The AH-64D only has the following Defensive systems installed:

The AH-64D is very similar to the AH-64A Apache. The differences are the lack of an option to carry AIM-9L missiles, the new Longbow radar, improved Hellfires, and an improved ECM package. The Apache is an excellent helicopter for attacking ground targets, and can also hold its own against many enemy aircraft. Through adequate use of cover, teamwork, and game sense, the Apache can easily dismantle enemy teams. An Apache pilot must understand all of the tools at their disposal.

Using cover is a very important part of staying alive in the Apache. Always stay behind a hill or building in ground battles. When exposing yourself in order to fire on the enemy, be mindful to not gain too much altitude. Most importantly, always listen to your RWR and MAW. If you hear an alarm, take evasive action immediately.

The radar of the Apache should be used as a secondary tool when engaging ground targets. The radar is not effective in obtaining target lock for ground vehicles. The AGM-114L radar guided Hellfire is not in the game, so guidance of Hellfires should be done by using the FLIR thermal imaging camera to lase targets. However, the radar is still useful in detecting enemy aircraft. By using the multi-function menu to switch radar mode, the radar will begin to search for air rather than ground targets. Keeping track of enemy aircraft is vital to survival in the Apache, as any plane can make quick work of the Apache if the helicopter is unprepared.

The Apache is surprisingly potent in air-to-air combat. Engagements should be conducted primarily through the use of the Stinger missile. The Stinger is a simple but effective air-to-air missile. It has an excellent seeker head and can obtain all aspect lock on almost any air target within 3-5 km (even propeller aircraft with a low heat signature). However, the Stinger can be easily fooled by flares or outmanoeuvred by a fast enemy aircraft. The best way to use the Stinger against enemy aircraft is when they are heading directly towards you. If fired at the right second, most enemies will struggle to dodge a Stinger.

The AH-64D Apache Longbow is an improved version of the AH-64A Apache. The AH-64B was not a production designation but instead was a proposed designation, and the AH-64C was later redesignated to the AH-64D because of their similarity. As such, the AH-64D was the second US Army production Apache variant.

The US Army began to draft plans to upgrade the existing AH-64A Apache fleet in the late 1980s. The upgrade centered around the Northrop Grumman APG-78 Longbow millimetric-wavelength fire-control radar. McDonnell Douglas converted four AH-64As in 1992 as a proof of concept. After this, production of the AH-64D, the designation for the upgraded AH-64As, began. The Longbow radar is mast-mounted, and it allows the usage of AGM-114L Hellfire 2 anti-tank guided missiles. Previous Hellfire variants required a continuous line-of-sight for the laser designator, while the Hellfire 2 has fire-and-forget capability. The APG-78 Longbow radar can also detect, classify, and prioritize twelve targets at once. It can "see" through fog and smoke, which can prevent the operation of infrared or TV systems.

Additionally, the AH-64D features improved electronics and avionics. The landing gear fairings are extended forward in order to accommodate more equipment, and the forward avionics bay has been expanded to incorporate more equipment as well. In 1999, the US Army ordered 530 AH-64A Apaches to be upgraded to the AH-64D variant. The AH-64D entered service in 1995. The AH-64D is in service with the United States, the United Kingdom, Israel, and the Netherlands.

In the early 1970s, the US Army was keen to adopt a more powerful attack helicopter, with improved anti-tank capabilities and performance over the existing AH-1 Cobra in service at the time. As a result, the Army initiated the "Advanced Attack Helicopter" (AAH) program in November of 1972, requesting design proposals from a number of prominent American helicopter manufacturers.

Following this, work on refining the YAH-64's design continued throughout the late 1970s. As part of this further development, the YAH-64 was optimized for the use of the newly developed AGM-114 Hellfire missile, which was in development since 1974. By the end of the '70s and going into the early '80s, the AH-64 was considered ready for full scale production. In 1981, the first pre-production machines were built, while the first production models began rolling off the assembly lines in 1983. Since then, the Apache has been produced in a huge numbers, participating in virtually every scale military operation of the US Army: Panama, Iraq, Bosnia, Kosovo, etc. Israel became the first foreign operator of the Apache named AH-64 Peten, where this helicopter saw intense combat in Lebanon and Gaza strip.