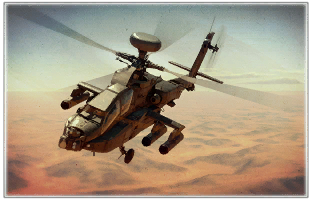 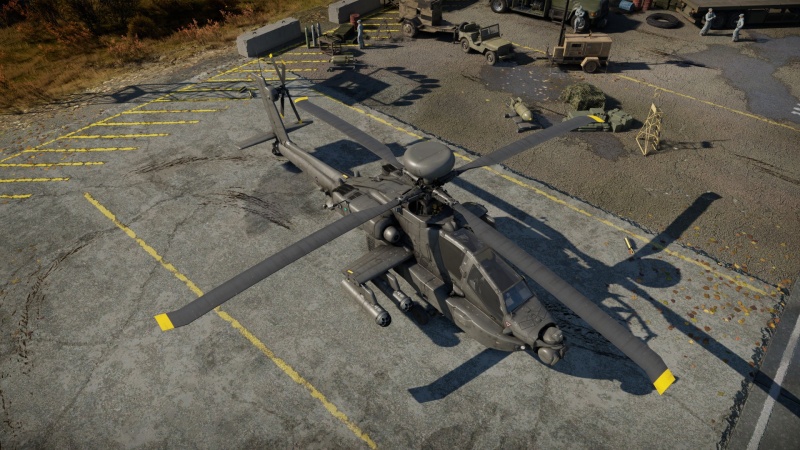 The AH Mk. 1, provides great manoeuvrability, incredible acceleration and overall providing a great speed of up to 325 km/h in arcade and 300 km/h in realistic and simulator game modes. An AH Mk.1 is able to do manoeuvres other helicopters can only dream about, from barrel roles, flips to loops which allow it to evade enemy missiles with ease.

The AH Mk.1, has only limited armour protection installed with bullet proof glass only being installed on the pilot windscreen. The helicopter uses Kevlar boron carbide, composite martial which is limited only to instrument, floor and side panels around the cockpit. It does not provide the same level of protection as seen on other helicopters such as the Mi-28N.

The AH Mk.1 Apache is armed with:

The AH Mk.1 Apache can be outfitted with the following ordnance presets:

The AH Mk.1 Apache has the following defensive systems installed:

The AH Mk.1 is functionally identical to the American AH-64D Apache, besides its use of the Starstreak missile system which replaces the AIM-92 Stinger. The Apache is an excellent helicopter for attacking ground targets, and can also hold its own against many enemy aircraft. The AH Mk.1 in particular has superior air-to-air and air-to-ground capability due to the Starstreak. Through adequate use of cover, teamwork, and game sense, the Apache can easily dismantle enemy teams. An Apache pilot must understand all of the tools at their disposal.

The radar of the Apache should be used as a secondary tool when engaging ground targets. When using the air-to-ground mode with the radar, all you have to do is select the target you want to lock on and then lock the target, this will lock your target with the FLIR camera allowing you to designate your laser. With this, you can ripple fire Hellfires and change your targets quickly without even having to spot them visually. The radar is also useful in detecting enemy aircraft. By using the multi-function menu to switch radar mode, the radar will begin to search for air rather than ground targets. Keeping track of enemy aircraft is vital to survival in the Apache, as any plane can make quick work of the Apache if the helicopter is unprepared.

The Apache is surprisingly potent in air-to-air combat. Engagements should be conducted primarily through the use of the Starstreak missile. The Starstreak is an incredibly fast missile (the fastest in the game by far) and has a range of around 7 km. The Starstreak's greatest weakness is the lack of a proximity fuse, requiring a direct hit to kill. To guide the Starstreak, simply acquire lock on the target and guide it similarly to a SACLOS ATGM. It can be difficult to hit planes, but it will easily dispatch helicopters.