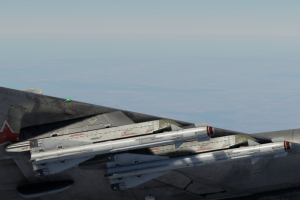 The R-60, being a short-range infrared homing missile, is usually most effective at ranges between 1,000 m - 2,200 m. The reason for this is due to the short burn time of the propellant and the first 1,000 m of the launch dedicated to bringing the missile to maximum velocity. The missile will typically burn out and likely not reach the target when launched at an enemy from >2,000 m, travelling in a straight line and moving above Mach 1.

The R-60 is best used when attacking the enemy from the side rather then from behind. When launched from behind, the enemy (if they have enough speed) can dodge the missile quite easily when moving with its trajectory then suddenly changing course, however, if launched from the side, the missile will usually hit thanks to its 18G maximum overload and can prove difficult to dodge when flying against its trajectory. While only being rear-aspect, the R-60 can sometimes be useful in a head-on engagement as a last resort (given the enemy has a large heat signature such as afterburners) if all ammo is expended. However, engaging in head-ons is not advisable with this missile due to the somewhat unreliable lock-on from of the missiles due to the front-aspect (depending on the aircraft your engaging).