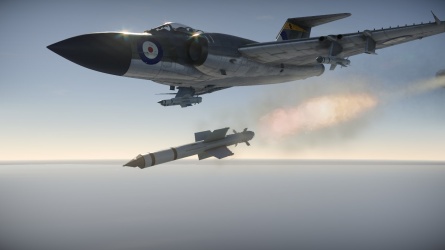 The Firestreak is a British Infrared homing air-to-air missile. it was introduced in Update 1.85 "Supersonic".

The Firestreak has a massive 22.7 kg warhead, the highest of any air-to-air missile in the game, making it capable of outright destroying any target it gets a direct hit on. The warhead has a larger proximity fuse setting than other heat seeking missiles (10 m as opposed to the more standard 5 m), this helps slightly offset the missiles poor manoeuvrability as any aircraft caught in the proximity fuse range is likely to suffer critical damage due to the large explosive mass.

The Firestreak has a warhead of 22.7 kilograms explosive mass, more than four times the payload of the AIM-9B, which only contains 4.5 kilograms of explosives. It is also slightly more manoeuvrable than the AIM-9B with a 13 G max overload compared to the AIM-9B's 10 G.