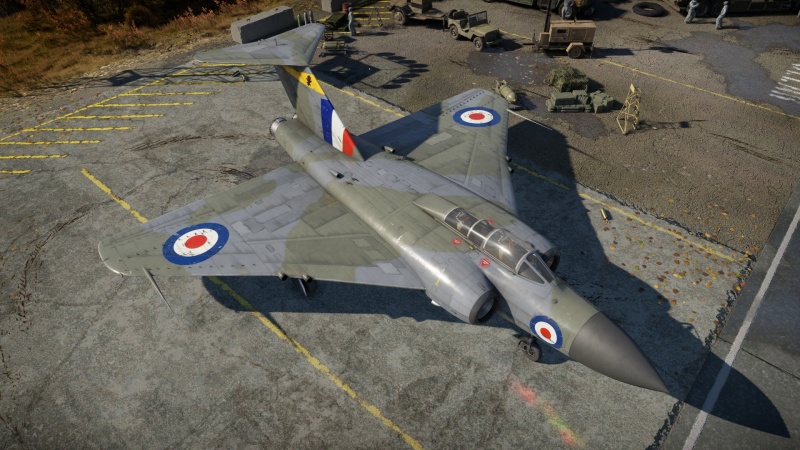 The Javelin's key advantage is its dual afterburning engines which give it good acceleration and very good climb rate. It can (at lower altitudes) accelerate past 600 km/h in a 20° climb without issue. The Javelin also has a rather low top speed compared to other vehicles of the rank, when spaded it redlines at around 1,000 km/h and will rip soon after. It can and will rip its wings without going into a dive, so caution should be exercised when traveling in straight lines.

The Javelin also bleeds a tremendous amount of speed while turning, due to its massive wing area. This is somewhat offset by the powerful engines, which give the Javelin excellent acceleration and climb rate for the rank.

The Javelin does not compress heavily at higher speeds, but will rip if you try and turn tightly at high speed.

The Javelin has no armour, and it is an extremely large aircraft. With the abundance of high calibre weapons at this rank, any hits will severely impact your ability to manoeuvre. Any damage to the wings or fuselage will severely hinder its ability to turn.

The engines and fuel tanks are scattered in the fuselage and the leading edges of the wings. Any shots taken there will either set you ablaze or knock out or damage an engine. Any shots to the tail are extremely likely to cut tail controls or remove the tail entirely.

If you lose a wing, the Javelin is able to fly and return to base with only one wing remaining.

Overall, the Javelin has extremely poor survivability. Any shot that you take, excluding American HMGs, have a significant likelihood of fatally damaging you, if not sending you straight back to the hangar.

You are going to want to focus on getting flight performance modifications first to make the Javelin more bearable to fly. The stock belts and ADEN cannons are very good so these upgrades can be left until last, the stock roll rate is also good so new boosters are not a necessity and you may wish to go for the higher tier engine upgrades first. The Firestreaks come down to personal preference; if you like missile gameplay then they can be effective, but they are far from the best missiles available in game. If you have never played with air to air missiles before or can't stand the stock offensive capabilities then you may wish to unlock them, but do not expect to be shooting down fighters in the middle of a dogfight with them. Learning when/where to use them, and in what circumstances they are likely to hit will take time.

The Javelin F.(A.W.) Mk.9 can be outfitted with the following ordnance:

As an aircraft the Javelin has many flaws and has picked up a fairly poor reputation, but once you get used to its quirks you can work around them and the Javelin can become an effective aircraft, which you can do well in. The Javelin's key advantage is its dual afterburning engines which give it good acceleration and very good climb rate; it can (at lower altitudes) accelerate past 600 km/h in a 20° climb without issue. As the Javelin has a fairly poor top speed (at least compared to some of the vehicles you can face), you will want to make use of the powerful engines and climb to a reasonable attitude quickly at the start of the match. In terms of climb profile your options are to either throw the Javelin in to a 10 - 20° climb straight off the runway, or build your speed (up to around 700 km/h), then enter the same sort of angle climb; the first option will get you to altitude in less distance, but you likely will not have much speed when you get there, on maps with room for it building speed first will give you more options. Your target altitude will vary depending on the situation, but typically you will want to be at at least 4,000 m, sometimes closer to 6,000 m on larger maps. Ultimately if an enemy fighter is above you in the Javelin and decides to dive on you, you're in for a bad time, you will likely not have the speed to out-run them in this scenario, and the Javelin's large size and somewhat lacking flight characteristics can make evasion tricky (and lead to you losing lots of energy); by climbing to a suitable altitude (depending on what the other team are doing) you can minimise the risk of this situation occurring.

Once at altitude you have two main options; you can either take up the role of bomber hunter, or set yourself up in a position to start diving down on enemy aircraft below you. The Javelin fits the role of bomber hunter fairly well, the search and tracking radars can be useful for finding bombers (although they suffer heavily from ground clutter) and the armament of four 30 mm cannons is more than capable of bringing down anything you face with one or two well aimed bursts. The Firestreak missiles also work well against bombers, which often do not have the manoeuvrability to evade them. A benefit of the radar, when coupled with missiles, is that if a target is locked then the locking cone for the missile will automatically follow the target, meaning you do not have to worry about pointing your plane straight at the target to get a missile lock. The Firestreaks can also be used against fighters, however they are not very manoeuvrable missiles so they can often be evaded by fighters fairly easily; they are best used a fairly short range, or if a target is flying in a straight line trying to outrun you.

The main drawbacks of the Javelin are the previously mentioned low top speed as well as it having terrible energy retention. The idea of turn fighting in the Javelin can be completely forgotten about in most circumstances; the turning circle is not great and attempting it will rapidly kill any speed / energy advantage you once had. Due to its poor energy retention, sudden movements in the Javelin should be avoided, where possible make large sweeping turns and gentle control inputs, in some situations even a brief hard rudder input can cost you a not insignificant chunk of speed.

Although the Javelin cannot generally out-run an enemy on pure speed alone there are cases where you can escape faster aircraft by exploiting the Javelin's excellent climb performance. While many aircraft have a higher top speed than the Javelin, not many can hold speed in a climb quite as well as a Javelin. This works best at low altitude and ideally needs to be done before the enemy can get within firing range. While travelling near your top speed open up the throttles to max and enter a climb; the Javelin will hold its top speed in a 10° climb all day, depending on what is chasing you this may be enough to stop them catching you, if not a 20° climb can be held for some time and even a 30° or more climb can be used for short periods of time if needed. This tactic will not work against all aircraft but many will bleed speed much quicker than the Javelin in a climb (particularly ones approaching 20 degrees) and often start falling behind you leading to the enemy player giving up and finding someone else to engage.

Another annoyance with the Javelin is the gun placement: quite far apart in the wings. The means that you have to take convergence into account and gives you less flexibility in terms of engagement range than nose-mounted guns, it also makes head on attacks a very risky proposition.

One more thing to be aware of with the Javelin (particularly at higher altitudes) is that once you reach your top speed you often do not need to use afterburner or even full throttle to maintain it in level flight. Depending on altitude you can maintain a speed near your top speed with 90% throttle or less, this can be useful for saving fuel or cooling the engines (not that the latter is necessary most of the time), if you don't want maxed out speed even a throttle setting as low as 75% can maintain a decent cruising speed.

Gloster Javelin was the UK's first interceptor to use anti-air missiles[1] and the first jet all-weather and night fighter specifically designed for that purpose.[2] It went through a very convoluted development history, with a number of versions introduced between 1954 and 1959,[3] only to be replaced by the Electric Lightning from 1961 onwards.[4][5] To this day it's the western fighter with the largest wing area, featuring a massive 86.1 m² wing (comparing to 44.08 m² of the Lightning, 52.8 m² of the Ho 229 V3 or 43 m² of the F-35).

Gloster Javelin FAW Mk 9 was a conversion of the FAW 7, with airplanes delivered between December 1959 and December 1961. The primary goal of the modernization effort was to improve the flight characteristics, most notably through the upgrade to the powerplant. Changes included:[3][5]

In total 116 fighters were converted to the FAW 9 version, 44 of which were further modified into the flight refueling version (FAW 9F/R) which features an added refueling probe and other related subsystems.

The first fighter squadron to receive deliveries of the Gloster Javelin in 1956 was the RAF Squadron No. 46 based in Hampshire, south England. The last one was the No. 60 Squadron, which was disbanded in 1968, where the FAW 9 and 9R fighters served at the Tengah Air Base in Singapore.