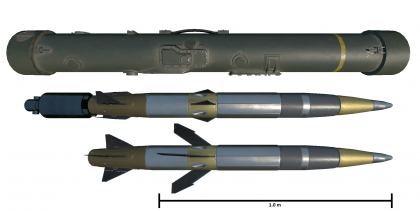 The Rbs 70 missile (the launch tube, missile with fist stage motor, and deployed missile are shown; scale is approximate)

The Rbs 70 (Robotsystem 70), is a Short-range Air Defense (SHORAD) laser-guided missile system originally designed to be launched from a tripod, but was later adapted to be fired from weapon-platforms and warships. The missile weighs in at 15 kg and features a 1.1 kg warhead comprised of 3,000 tungsten pellets together with a directional shape-charge penetrator.

The missile is powered by an initial booster charge together with a smokeless solid propellant engine making the missile able to reach speeds from mach 1.6 to mach 2 depending on the variant. The missile has an operational range of 250 m - 8 km, and a maximum flight altitude of 5,000 m.

The missile is a so called "beam-rider" and navigates towards a laser designated position, thus requiring the user to continuously "lase" the target until the missile reaches the target.The missile features both a proximity fuse and a direct impact fuse, giving the missile the ability to detonate in close proximity to aircraft or via a direct hit.

The missile features two methods of damage; shrapnel using pre-fragmented tungsten pellets and a shape-charge penetrator with the secondary mostly being used against low-speed targets such as hovering helicopters and slower low-flying aircraft.

The Rbs 70 is a short ranged missile with a small payload making it more suitable for engaging helicopters rather than aircraft, even if it is capable of doing so; especially if the missile is intercepting an incoming aircraft. The warhead however is lacking in explosive power thus does not guarantee a one-hit-kill and limits the anti-tank usage of the missile both using the kinetic penetration and the high explosive damage. The laser designation and the smokeless engine makes the missile harder to detect but also forces the user to keep a constant lase on the target making it a bit of a double-edged sword.

Overall, the missile is best utilized in an anti-helicopter role where it is placed in either urban areas with high visibility or at spots where the vehicle or platform of the weapon is well concealed from ground and airstrikes since it is not very effective at firing at armoured targets, both because of the low penetration and the lack of armour on the vehicles carrying it. the user should also avoid engaging high speed disengaging or circling aircraft since the probability of a hit is fairly low.