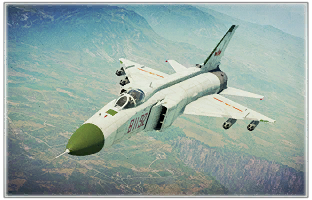 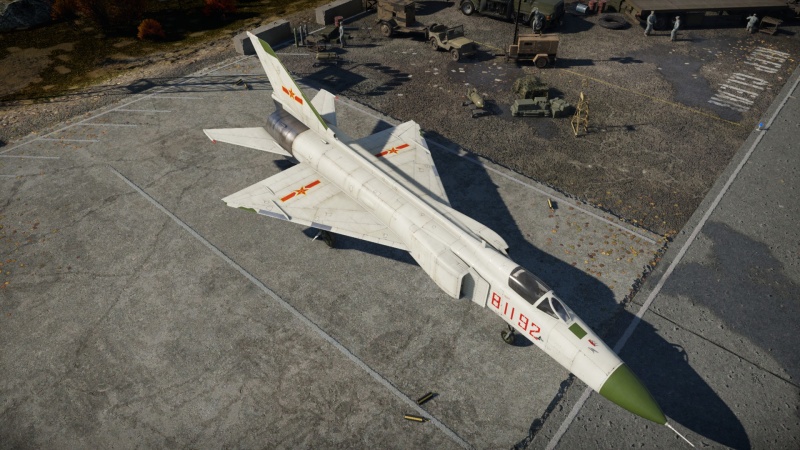 The Shenyang J-8 family of interceptor aircraft was designed to protect China's skies from bombers and reconnaissance aircraft. The J-8B is a revision of the initial J-8I series with more powerful engines and redesigned air intakes/forward fuselage for better avionics. It offers long-awaited SARH missiles and a fire-control radar for the PLAAF, while retaining a good top-speed and sufficient manoeuvrability for such a huge jet. The J-8B is more than 20 m in length and 5.4 m in height, making it the largest of the Rank VII fighters in all dimensions except wingspan, but it has a lower empty weight than the F-4 Phantom or even the MiG-23. With two WP-13 engines and very clean aerodynamics, the J-8B has excellent acceleration and climb to fit its role as a high-altitude interceptor and can still turn well enough to dogfight in a pinch - quite apropos to its NATO reporting name of a long yet sleek whale.

However the J-8B is still an early model of the J-8II series and has some quirks. The domestic Type 208A radar has comparable performance to the F-5E's AN/APQ-159 with no LD/SD capabilities. It is also limited to only 4 air-to-air missiles. Although the J-8B cannot go toe-to-toe with dedicated BVR fighters like the F-4J and F-4EJ Kai, it can still be successful if used with some caution and complements the J-7E well.

To sum up what a J-8 series looks like, "a Fishbed on steroids" would be very fitting since the overall design was literally an enlarged version of the J-7 with 2 turbojet engines: the later J-8II series revised the front of the airframe and introduced side intakes for a more streamline design. This size is also a drawback of the J-8B since it becomes a much larger target than its tech-tree predecessor, J-7E.

Thanks to technological improvements over the decades, the J-8B equips two AECC Shenyang Liming WP-13A-II turbojet engines, improving the overall speed and climb rate over the J-8I (the J-8II was the fastest, highest climb rate jet in the PLAAF service until the introduction of Su-27SK/J-11 Flanker-B/L). The use of composite material also reduced its weight, while it retained its good manoeuvrability for such a large interceptor thanks to reworked elevators. However, just like any delta wing jets, any high AoA manoeuvres would be at the cost of severe speed bleeding; although the twin engines do mitigate some of the problem with their high acceleration, it is still advised to fly the J-8B as an interceptor instead of a turn-fighter, hit-and-run or high altitude operations is where it shines.

As with many jet aircraft, the J-8B has self-sealing fuel tanks, as well as a 65 mm bulletproof glass windshield and a 16 mm plate behind the pilot's seat.

The J-8B is the first Chinese aircraft in War Thunder to be equipped with the Type 23-3 cannon, which is a copy of the Soviet GSh-23L seen on the MiG-23 and most MiG-21 models. Compared to the J-7E's lone 30 mm cannon, the Type 23-3 has a much higher rate of fire and more ammunition, but poorer ballistics and a lesser damage output.

The J-8B can be outfitted with the following ordnance:

The J-8B's primary weapon is the PL-5B infrared homing missile that users of the previous J-7E will be very familiar with. It is still an excellent weapon with high manoeuvrability and acceleration, but it does not have an all-aspect seeker and cannot be used in head-ons.

A new asset is the Italian Aspide-1A semi-active radar homing missile, the first of its class available to any Chinese fighter. A derivative of the AIM-7 Sparrow, the Aspide looks about the same but has an improved rocket motor: its 25 G overload matches the Skyflash and its Mach 5.0 max speed is the best of any Sparrow model in the game. The Aspide offers a fast and deadly punch in head-ons or longer distances. However, it is held back by the J-8B's primitive radar, which lacks look-down/shoot-down capability and has limited range. In addition, only two can be carried.

For ground attack, the J-8B has access to Type 90-1 HEAT rockets and 500 lb bombs. Although it can carry a half decent ground attack payload, it lacks a ballistic computer to aim its weapons precisely and is thus unsuited for serious CAS.

The basic design of the J-8 series is aimed for high-altitude interception of supersonic strategic bombers and the J-8B is no exception, its excellent climb rate, top speed, and acceleration make it a high-flyer by all means. Don't be fooled by the sheer size of it, the aerodynamic and control surface features on the J-8B make it surprisingly manoeuvrable as its flight envelope is very similar to a MiG-21MF, if not better; while the size can be a problem as well due to the large surface area, it would be easy for other jets to land shots upon you.

The overall air-to-air weaponry and avionics are sufficient, though somewhat inferior to competitors. Neither the PL-5B IR AAM nor the Aspide-1A SARH AAM are limited by launch overload, which really helps when shooting down targets further than 1.5 km (both missiles need some distance before they can manoeuvre). Although the J-8B can carry up to 8 bombs or 28 Type 90-1 HEAT rockets, the jet doesn't come with any means of CCIP or CCRP so only take them as the last ditch options against enemies. The large calibre countermeasures help in mitigating the flaws in weaponry systems, but it is still advised not to rush into the battlefield.

Pilots of the J-8B should be extra cautious to any enemies that might appear. Although flying high can mitigate the affects of radar ground clutter if you choose to bring the Aspide-1A missiles (aka A弹 [A-missile] in PLAAF), it means the same for enemies' SARH missiles. If only bringing PL-5Bs into the fight, stay away from the heated battlefield, then fly in and pick up targets who has already used up their energy or unaware of your existence, a solid hit from a PL-5B can take down enemies with relative ease; do keep in mind that the missile is best used at distance over 1.5 km due to its immersive acceleration, the pylons without overload limitations really helps during interception of targets at lower altitude or revenge on foes who overtakes J-8B and didn't pull away from the player. If the player decides to bring the Aspide-1A missiles in case of a head-on, a special note for J-8B is that due to the overall inferior performance of the SL-5A (208A) radar, tune the radar to 60 km acquisition range and under short scan width (with a very narrow channel of scanning) for best performance against enemy jets; it is suggested to assault targets within 10 km radius and at higher altitude for better radar acquisition - the performance of Aspide-1A is likely to blow the enemies into pieces with ease; try to keep enemy on track as much as possible before Aspide hits the target.

In view of harassment from high-altitude reconnaissance planes and supersonic strategic bombers from both US and USSR in early 1960s, Xu Shunshou (徐舜寿) and Huang Zhiqian (黄志千), the duo of designers from Shenyang Aircraft Corporation (SAC) who had just finished the JJ-1 (歼教-1) program, soon started their design on a new interceptor. There were 22 designs for the new interceptor and most of them opted for a single-engine version, while Huang Zhiqian decided to leave a twin-engine design in case the development of the new engine would lag the entire program. After an intense debate on whether the new engine would be made in time, Huang's design, dubbed "Roast Duck" (烤鸭), using 2 existing WP-7 engines from J-7, became the design SAC opted for. This design was given the green light on 17th May 1965 as the J-8 (歼-8).

Although the development of the J-8I was smooth sailing, during the ground tests and stress test, the first prototype was proved unsafe to do test flights and the failure of the first stress test almost gave the J-8I its death sentence; this was further intensified by the deaths of the designer duo. The new chief designer, Gu Songfen (顾诵芬) continued the project with their wills and finally rectified its manufacturing flaws. The J-8I finally made its first flight on 5th July 1969. However, SAC took a whole decade to finalise the aerodynamic design of the J-8I and the new jet only passed for state certification in the very last hours of 1979.

Although later simulated dogfights with J-7 proved the J-8I was superior to the former in many aspects, the MiG-23 (NATO: Flogger) was becoming a big threat to the PLAAF with better avionics. Although a MiG-23SM had been obtained from Egypt for evaluation, instead of reverse-engineering a domestic Flogger, they opted for a more streamlined design with side intakes based on the Flogger, as well as the first Chinese jet to utilize composite materials on wings and stabilizer for weight reduction. The redesigned the J-8II made its first flight on 12th June 1984 with new technologies utilized during manufacture as well as for SARH missiles.

The 1980s also marked a better relationship with western countries, SAC then sought Grumman to upgrade the J-8II into a modernized jet dubbed "Project 8-2" or Peace Pearl (八二工程/和平珍珠) with the latest avionics from the F-16C. However, the 1989 Beijing Crackdown halted this program and it was eventually cancelled in 1990 in view of importing new Su-27 Flankers from the Soviet Union. While the Project 8-2 and later Project 8-3 (J-8C) failed, SAC finalised the radar and the J-8II Block 2/J-8B passed certification in 1995. With later models of the J-8II series produced in the late 1990s and 2000s, these earlier J-8B were mostly upgraded to newer standards (D with refuel probe; H,F with better avionics and missiles); the remaining combat-capable J-8II series were decommissioned by the very last Air Force brigade in Western Theatre Command [1], marking the end of J-8II in combat service and only a recon brigade in Chongming, Shanghai still operate the very last dozen of JZ-8F recon.

The default skin for J-8B includes the number "81192" painted on the sides outside of cockpit, this number has become the spiritual number of military enthusiasts and players in Mainland China due to the Hainan Island Incident between the PLANAF and USN.

On 1st April 2001, an EP-3 (BuNo. 156511) from VQ-1 of the USN stationed at Okinawa, piloted by Lieutenant Commander Shane Osborn was conducting a reconnaissance flight close to Hainan Island, where a pair of J-8B from Hainan Lingshui Airbase intercepted them; one of the J-8B, piloted by Major Wang Wei (王伟) from 27 Brigade, 9th Division of PLANAF, accidentally rammed the EP-3's left wing and was severely damaged by the propellers, his jet crashed into the South China Sea and the EP-3 made an emergency landing at Lingshui Airbase. Although Wang Wei was witnessed to have ejected, after weeks of searching, he was declared KIA and was posthumously given martyr and the "Guardian of Sea and Air" (海空卫士) title by PLA.

This incident further ignited the backlash towards the US in Mainland China after multiple diplomatic incidents during the 1990s; the EP-3 was then disassembled and sent back to USN with an Antonov AN-124 and the incident ended with an official apology from the US Government.

A decade later, photos from a photographer in Mainland China proved that the J-8B numbered 81192 was still in service in the early 2010s (but upgraded to J-8BH standards with a black radome); later rediscovery of magazine photos showed that a model of the J-8B given to Ruan Guoqin (阮国琴), widow of Wang Wei, was numbered 81194. The debate of whether 92 or 94 was the jet involved still continues, but the number 81192 has already become the symbol of the long-lasting Sino-US conflicts and there are memorial events every year at Wang Wei's cenotaph at Huzhou, Zhejiang.