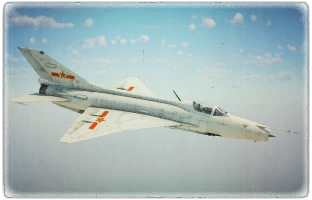 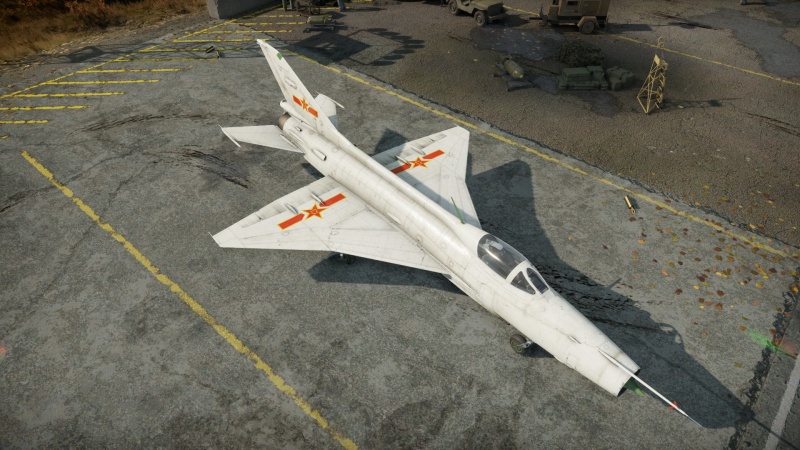 The J-7E is a rank VII Chinese jet fighter with a battle rating of 11.0 (AB/RB/SB). It was introduced in Update "Red Skies".

Based on the already well-developed J-7II and its modifications (J-7IIH/B/M; C/D), the J-7E offers a very different way to upgrade a Fishbed - not only does it have a more powerful engine and additional fuel, it also comes with the iconic Chinese Fishbed's double-delta wing with slats, making it a formidable competitor in terms of overall manoeuvrability and especially at lower speeds, which no Soviet Fishbed can ever offer. With its newer PL-5B missile, the J-7E can prove its abilities over his competitors and use its amazing manoeuvrability to finish off enemies once and for all.

Thanks to its new WP-13F engine and the unique slat-equipped double-delta wings, it has one of the most impressive manoeuvrability among all the current top-tier aircraft, at a whopping 29 secs even when stock in RB; leaving most its competitors (other than F-5 family) behind by at least 3 second; and thanks to the overall lighter weight to all Soviet Fishbeds, it has overall a higher thrust-weight ratio than all but the MiG-21bis, with the pair of slats that even works at 900 km/h, it should really help players in terms of snap-shot your enemies with a burst.

An often mentioned feature of J-7E is the iconic double-delta wings which comes with a pair of slats, the major difference from the previous J-7II and all other Soviet Fishbeds. This newly designed wings can even keep manoeuvrability even at higher speeds and the design is specifically aimed to enhance lower speed manoeuvrability as well, so new pilots to this plane will find her very different from Fishbeds. With the new WP-13F engine (reverse engineered R-13-300 with some newer technologies) and overall lighter than new airframe Fishbeds (PF and beyond), it can retain its speed while pulling at most 12G before your wings rip off, making it a tough opponent to deal with for heavier jets.

The J-7E comes with a 10 mm plate behind pilot's head and a 16 mm plate behind the ejection seat, while it doesn't prove to be much of a concern of cannons, it does help to stop some smaller caliber gunfire; as well as a 60 mm windshield that is durable enough to take some shots than all the remaining part of the aircraft.

Because the addition of a new fuel tank to the lower left side of the aircraft and compensate for the weight of newer missiles, unlike his predecessor, the J-7E has only a single Type 30-1 cannon on the starboard. For pilots without good skills, these 60 rounds will be very painful to use albeit 30 mm gun has good ballistic and damage (a few round burst can tear down most aircraft) ; while in SB, the J-7E comes with a HUD and the rangefinder is linked to it, making it somewhat useful to track down enemies and gun them down with a bit more precision. However, Pilots do need to compensate the offset of the starboard gun and aim a bit towards the left when shooting at closer ranges.

The J-7E can be outfitted with the following ordnance:

With the new PL-5B introduced to the PLAAF that can pull 20G upon its targets albeit its 4G launch limit, the J-7E can send careless enemies straight back to the hanger with its higher explosive equivalent load. But all this come at a price: you only have the starboard Type 30-1 cannon as the last ditch weapon due to additional internal fuel tanks replaced the original port side gun, and thus you have only 60 rounds just like the original MiG-21F-13.

In this case, pilots should pick those enemies who just did their manoeuvre and be careful for the battlefield, then go straight upon them and aim a bit to the left to compensate the gun's placement; a burst from 30 mm can tear down anything that flies with some precision. And the overall playstyle of J-7E is similar to its fellow Fishbeds: keep yourself at lower altitude and start to "patrol" for anyone who is possibly in their tunnel vision (where a person has only a little FOV due to his speed), then go ahead and assault them with your powerful PL-5B AAMs. They can make really short work to the enemies but please do keep your launch overload in check as mentioned; if you only have PL-2 which is pretty just barely better than none or even worse, only your cannon left, be very cautious on when should you fire that burst or launch your pair of missiles. If you wasted the chance, pilots can meet their demise pretty quick if your team is on the disadvantage. And it should be reminded that unless really necessary or it is one-on-one dual with your enemy, in most cases DO NOT dogfight for very long time. But if you really have to, bleed the opponent's energy as much as you could: your higher thrust-to-weight ratio and double-delta shine here.

During the early 1980s, mainland China had better relationships with European countries who seek to open up their military equipment market; thus during these days the older J-7II received a overhaul upgrade coded J-7B (or F-7M in foreign market) with British electronic equipment; while at the same time Chinese got their hands on a few MiG-21MF from Egypt for upgrading the PLAAF fleet with a faster and radar-equipped aircraft, which later became the J-7C/D. This failed to meet Central Military Commission's and PLAAF's requirements on low speed dogfights, though they were impressed by the R-13-300 engines on them and thus it became the Shenyang Liming WP-13 engine.

Although all these must be supported with a higher military budget (which wasn't available in the 1980s due to the economic reform) and during the late 1980s, most of the budget went to the later J-10 "Firebird"; while there were the mass of the older Shenyang J-6 fleet that needed replacement and PLAAF was in dire need for a fighter that came with ground-attacking capabilities (even the Shenyang J-8II was among the modified aircraft), so the CAC (Chengdu Aircraft Corp.) decided to made an upgrade on J-7 based on the opinion from foreign users, especially in terms of manoeuvrability .

Thus, the J-7IV (that later became the J-7E) program started in 1987 and by May 1991, it made its first flight and 2 years later it came into PLAAF commission.

The main improvement was the manoeuvrability, with the new WP-13 engine and the iconic double-delta designed by Northwestern Polytechnical University (西北工业大学 in Xi'an, Shaanxi) with a slat that can be lowered to 25° (and in fact the first PRC fighter with slats) that really helped its manoeuvrability - in a PLAAF's exercise in 1993, it was concluded that it was 43% better than older J-7II, as well as longer range with additional fuel tanks at the cost of giving up the port side cannon due to decreasing usage of cannons. Other improvements included additional pair of pylon, domestic avionics with a HUD, as well as some of the cockpit gauges were digital.

These 260 J-7Es built from 1994 to 2001 became the cornerstone for PLAAF and in 2006; based on the later F-7PG that eventually came with a radar; the ultimate Fishbed of Mainland China- the J-7G came into service, with HMDs and latest avionics.