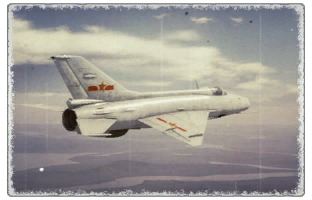 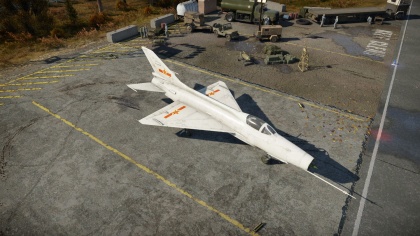 After the Korean War, several nations came out with various aircraft which would out-fly opposing aircraft, especially in a dogfight. The U.S. introduced the Lockheed F-104 Starfighter and Northrop F-5 Freedom Fighter while European nations France, England and Sweden rolled out the Dassault Mirage F-1, Mirage III, English Electric Lightning, Hawker Hunter and the Saab Draken. At this time the Soviet Union was working on further developing the twin-engine MiG-19 but realized what it actually needed was a fast, single-engine light-weight fighter in what ultimately became the most highly produced supersonic fighter in the world and used by over 60 countries. This basis of this fighter was the Ye-66a (Ye stands for "Yedinitsa" or single-unit), later changed to MiG-21 F-13 or as dubbed by NATO, the Fishbed-C. Due to a shaky political situation, the Chengdu Aircraft Company in China reversed engineered the MiG-21 sent by the Soviet Union without technological documents. In the process they solved almost 250 inherent problems with the MiG-21, upgraded the fuel system, replaced the ejection seat and reoriented how the cockpit canopy opened. The result was the J-7 interceptor fighter that looked like the original MiG-21 with minor design and performance differences. NATO dubbed this aircraft Fishcan. 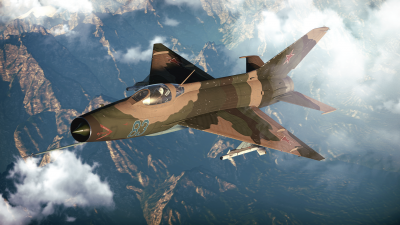 Though the J-7II looks almost exactly the same as the MiG-21 pictured here, the Chinese made many improvements when reverse-engineering the aircraft.

The J-7II was built to be a point defence interceptor, not an air-defence fighter slated for combat missions, basically a short-range day fighter. Due to being cheap, fast, inexpensive and simple to maintain, the essence of this fighter's existence was to be used in large groups to overcome the technologically advanced Western aircraft. Essentially it was a missile which houses a pilot, two 30 mm cannon and two PL-2 air-to-air missiles. The sleek airframe was made with aluminium alloys, steel, magnesium and fibreglass. The air-intake cone automatically adjusts during the flight to help the aircraft remain aerodynamic. The fighter sported a delta wing with a 57° leading edge and even the all-moving tailplane utilizes the swept feature. Everything about this jet focus on speed which lends it reaching out to the Mach 2 range. The strength of the aircraft is its speed in a straight line whether in a climb, level flight or a dive, however, when it turns at all, it haemorrhages its energy and when it gets below 700 kph, it is difficult to get back up to speed without diving to make up that speed. When caught near the ground and going slow will be extremely frustrating for a J-7 pilot.

The J-7II as-built shaped like a missile excels in air-to-air combat, but beware of turning or manoeuvres, though they will slow you enough to get behind an enemy fighter, it may also slow you enough for another enemy fighter to get a missile lock or gun solution on you. Always be aware of your surroundings. Though this fighter can be outfitted with rockets or 500 kg bombs, these options should be reserved for special situations as the attacker/bomber function was never designed as a multi-role function as it was with the F-4C. The PL-2 missiles can be a challenge to get used to, so newer pilots may elect to outfit the HF-4 rockets and use them to go after bombers. With only 120 rounds of 30 mm cannon ammunition between the two cannons, trigger control is a must or else you will be waiting often for a reload timer to count down or will be frequently returning to base to reload.

Due to the Chengdu J-7II being an interceptor fighter, its main purpose is to interdict enemy aircraft. For this purpose, a jet fighter should meet certain criteria such as being light-weight, fast, aerodynamic and cheap to build and maintain. The J-7II fits all of these criteria to a tee. Sitting at a take-off weight of 9.5 tons and power output from the WP-7b jet engine of 3320 kgf, the J-7 was a rocket compared to other contemporary fighter/interceptor aircraft. The closest comparable aircraft in-game are the Hunter F 1, Hunter F.6 and the Super Mystere B2. Pound for pound and thrust for thrust, the Hunter F 1 is the closest with a take-off weight of 9.5 tons and power output from a Rolls-Royce Avon Mk. 113 engine with 3188.1 kgf, however, the final thrust output was no contest with the J-7II able to fly 1,000 kph faster than the Hunter at top speed.

Manoeuvrability in the J-7, for the most part, is non-existent. Due to the shape of the wings and the aerodynamics of the entire aircraft, it is built mostly for high-speed low-drag in a straight flight and that becomes apparent when it enters into a manoeuvre or a turn where it begins to bleed speed at a horrendous rate. With no adjustment to the throttle, a J-7II can drop from 1,000 kph to 600 - 700 kph just by making a turn or manoeuvring from flying in a straight line. J-7 pilots must take into account when they attempt evasive manoeuvres after a missile is fired at them as doing so they may avoid the missile, but they may also end up flying under 700 kph which is a bad place to be and can be difficult to return from if there is no room to dive to build up speed. The best bet to use the J-7II is up at higher altitudes where the jet flies faster and has room to dive if the speed needs to be built up after turning or manoeuvring.

While the J-7II can be outfitted with 500 kg bombs, adding the extra weight impacts this fighter even more. With the bombs placed on under-wing pylons, it decreases the roll-rate of the aircraft having that weight away from the centre of the aircraft (or in comparison to a clean aircraft – without bombs). Bombs are an option for the aircraft, however, due to needing to maintain speeds above 700 kph using the J-7 as a bomber is less effective and can expose this aircraft to other fighters which prey on low and slow aircraft.

With the J-7II configured for and operated as an interceptor, not much thought was put into protecting the aircraft as it was relatively cheap and easy to build and maintain. However, protections were put in place for the pilot which on the other hand was a valuable asset. Protective steel behind the seat and pilot's headrest along with the 65 mm bulletproof glass helped protect the pilot from defensive fire coming from bomber turrets or from smaller calibre guns found on many Western fighters of the time.

The J-7II's role as an interceptor basically had it scramble from the airfield when enemy fighters/bombers entered the area and it went full afterburner to reach attack altitude where it would make several passes, down the aircraft and return to the airfield. Due to its speed and limited weapon load-out, further protections for the aircraft's critical component were not necessary and thus left off the aircraft to allow for its light-weight and quick intercept capability.

The J-7II is armed with:

The J-7II has been outfitted with dual 30 mm Type 30-1 cannons (Chinese version of Nudelman-Rikhter NR-30 cannon). This gun is the perfect weapon for an interceptor class aircraft as it is large enough calibre to do some serious damage, however, this cannon only houses 60 rounds of ammunition per gun. While the small ammunition pool appears to be a negative point to the aircraft, minimizing weight is necessary to ensure this aircraft can intercept inbound enemy aircraft. Compared to the MiG-21 F-13, the J-7II has a second cannon and double the ammunition (60 RPG), however, trigger control is still a necessary skill the pilot must use to ensure enough rounds available to make the necessary shots before returning to base to reload.

The J-7II can be outfitted with the following ordnance:

The Sino-Soviet split, which began in the late 1950s, led to a period of chilled relations between the Soviet Union and the People's Republic of China. The most modern fighter aircraft in the inventory of the People's Liberation Army Air Force was the MiG-19, purchased from the USSR. While an effective fighter at the time of its introduction, rapid advancements in fighter jet development lead to new aircraft like the MiG-21 capable of flying at twice the speed of sound. Around 1960, plans were underway for MiG-21s to be license produced in China, but negotiations broke down and Soviet advisors were pulled from the country, leaving the fate of the project in question. A few years later, Khruschev unexpectedly approached Mao with an offer to sell the MiG-21 and its technology. This deal went through and several MiG-21s, parts, and associated documentation were delivered to China. However, it was discovered that the documents were incomplete. In order to manufacture them properly, the MiG-21s were thoroughly reverse engineered, and a number of improvements were made in the process. The finished product of this effort was the J-7I, mostly identical to the original MiG-21 F-13.

A huge number of J-7 variants were manufactured in the course of its nearly 50-year production run, though development and production stagnated during the chaos of the Cultural Revolution and the PLAAF often had to rely on the outdated Shenyang J-6. The J-7II first flew in 1978 and featured an improved engine and ejection seat, among other changes. Further versions often incorporated Western avionics/weapons and were popular export items to customers like Bangladesh, Pakistan, Nigeria, and Iran. The ill-fated J-7III series attempted to match the Soviet MiG-21SM, featuring a larger and more powerful radar, but ultimately was abandoned. The successful J-7E series introduced a unique double-delta wing design that improved the aircraft's agility and fuel capacity tremendously. The J-7 design was also used as a starting point for the Guizhou JL-9 trainer and the JF-17 multirole fighter.

At present the J-7 is still in the inventory of numerous air forces, including the PLAAF. While limited in capability and slated for replacement by many of its users, it is a low cost and low maintenance fighter that will continue to fly for the foreseeable future.