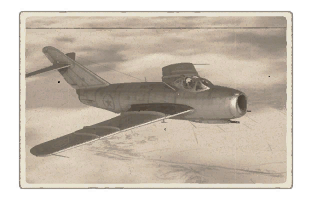 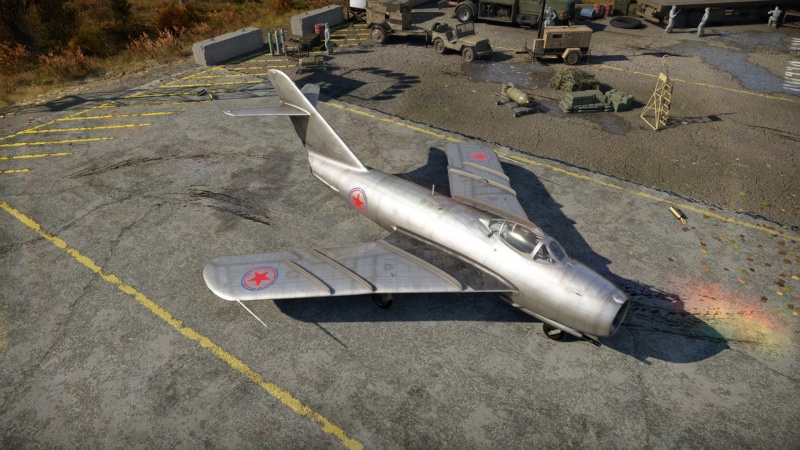 The Shenyang F-5 is a premium rank V Chinese jet fighter with a battle rating of 9.3 (AB/RB/SB). It was introduced as a premium pack in Update 1.91 "Night Vision" and was removed from the store after the 9th Anniversary Sale. It later returned for purchase in-game with Golden Eagles

The MiG-17 was the solution to upgrading the MiG-15 and naturally with it being a successful fighter which was mass-produced, variants eventually became available for other nations to purchase. China was one of the countries which sought to acquire the later versions of the MiG-17 which utilized the VK-1F style afterburning engines. With its sleek frame, swept-back wings and tailplane, the F-5 though a bit heavier than the typical MiG-17 is a powerhouse in the sky. Compared to many other aircraft, using the afterburner will allow the F-5 to outclimb many of its contemporaries including the F-86 variants. Many pilots who hope to catch an F-5 in a climb will be disappointed when they stall out only to see the F-5 dropping in on them from above for an easy shot.

Thanks to the new engine, its sustained turn rate was improved by ~10% and can reach 19 deg/s when keeping the speed in horizontal turns close to 500 km/h which is more than enough to outturn in two circle fights most of subsonic or transonic jets like the CL-13, F-86 or J29F.

Though not built for instantaneous turns, at the top of a climbing arc, the F-5 can make a relatively quick reversal as they nose over and begin to descend, pulling back on the throttle, extending flaps and air brakes, the F-5 can set themselves up for a shot at a stalled out fighter or can manoeuvre to end up as the hunter in chase of its prey.

When diving in this fighter, it is crucial to watch the aircraft's speed, as it is possible to go slightly supersonic and at that point the control stiffening becomes excessive, making it extremely difficult to execute any finite movements.

With this fighter sporting an afterburner, it is essential to either watch the fuel level or take more into battle. The afterburner will consume fuel much faster than the aircraft without it. One advantage of this fighter as it consumes its fuel is that the plane becomes lighter and can eke out a bit more speed.

As an air-to-air fighter, it is possible to include two PL-2 air-to-air missiles in conjunction with the guns, or you can eliminate the missiles and entirely rely on the 37 mm and 2 x 23 mm autocannons. The gun placement on the underside of the fuselage is ideal for not needing to worry about convergence; however, the pilot will need to compensate for the different drop rates of the 37 and 23 mm cannons to ensure both will impact the enemy fighter without one or the other over-shooting or under-shooting.

The F-5 has just enough armour protection to protect the pilot from machine-gun fire, smaller cannon fire and even some more substantial indirect cannon hits. Though not a guarantee of the pilot's survivability, the 10 mm steel plate in conjunction with the 60 mm bulletproof glass will aid in protecting the pilot in the event, he happens upon a bomber with defensive turrets or ends up in a head-on attack against another fighter. The 16 mm steel plates in the seat back and headrest will provide minimal protection as if ammunition fire from the rear penetrates that far, it is likely that the aircraft will already be experiencing catastrophic engine or structural failure.

Just like Shenyang F5's old brother MiG-17, the different caliber armaments on both sides of the plane will balance each other out. Despite the F-5 holding the largest caliber among the its fighter peers, the 37 mm N-37D cannon needs experience to ace. Though the two "smaller" 23 mm NR-23 cannons are deadly and easier to master than the 37 mm N-37D. Due to the low ammo rounds per gun, all cannons are not of the "spray and pray" type. These guns rarely overheat, though this is mostly since the magazine will be empty after only five seconds of shooting. It is necessary to fire in bursts only if confidence is high enough that the shots can hit the targets. For ammo selection, one should use "Air targets" belt on all cannons since it contains the most high-explosive and incendiary shells that have great effect against air targets. Launching ground strikes using "Armored targets" belts is not a good option due to the slightly inaccurate and unpredictable trajectory.

Players also have access to PL-2 air-to-air missiles, which are the Chinese version of the Soviet K-13 AAM, which is similar to NATO AIM-9B Sidewinder AAM. The missiles are not great at this battle rating, but still usable. Players can choose not to carry them if they prefer using the gun to fight. To use these missiles, player have to spool up the tracker first. Spooling up the tracker will take around 5 seconds so it is better to plan ahead. Just like AIM-9B or any other first generation AAM, PL-2 does not have any off-axis angle to lock the target. To increase the chance of hitting, aim at the opponent's tail while they are flying in a straight line and fire at a distance less than 2 km. Any manoeuvre the opponent performs will prevent the missile from hitting its target.

Players also have access to two 250 kg bombs. Two 250 kg bombs are not enough to bomb a base so they are only useful in the ground attack role in ground realistic battles. Keep aware of the tactical situation at hand to bring the most optimal weapons loadout to the battlefield.

The Shenyang F-5 can be summarized as an energy-specialized variant of the Soviet MiG-17. The Shenyang F-5 is heavier, thus its instantaneous turn rate is moderately worse than the MiG-15s and the MiG-17s. However, when facing these aircraft, you can take advantage of your afterburner thanks to which this plane has better sustained turn rate at medium and high speed than both the MiG-17 and MiG-15. You should not turnfight these opponents or other planes like the Sabre series in most circumstances, instead, you should keep the fight strictly vertical. You have a far better climb rate, far more thrust than any MiG-15, -17 or CL-13B, therefore you can dictate the fight with relative ease. While you try to attain your altitude advantage, be aware of the Angle-Of-Attack (AoA) the MiG-15 and 17 can still pull, you most likely will have to dodge 1 or 2 firing solutions, then you will be out of harm's way, given you don't make a critical mistake. Turn this altitude advantage into an energy advantage to decide how and when to engage an enemy.

At high speed, the Sabre is much more manoeuvrable than you are. The Sabre will pull much harder, roll much better, and his guns are a lot easier to use. You must not try to roll around the Sabre's guns and reverse him often, because while this can work, the accessibility of his guns paired with his superior high-speed manoeuvrability leaves you at a very high chance of severe damage, or knock-out. If a Sabre is at your six-o'clock, and you two are at near equal speed, and obviously he's not extremely close: you should pitch up, turn your afterburner on, and climb. Not a single Sabre in-game can even rival your climb rate, thus, he will watch you takeoff, and there is nothing he can do besides disengaging from the pursuit.

Alternatively, if you are behind a Sabre and you cannot land shots, be aware. If he starts rolling, rapidly losing speed, and you start rapidly closing the distance, drop your throttle a tad, and pop your airbrakes. This "pre-airbraking" prevents you from overshooting, because once you start overshooting in the Shenyang F-5, you are in a lot of danger. Take your time with defensive Sabres, do not let them bait you into an overshoot. If the worst-case scenario arises and you overshoot, put yourself into a vertical corkscrew by utilizing your powerful thrust and manoeuvring energy retention to stall out your opponent. Be careful not to fly straight over their nose.

Uptiers in this plane are tough. Supersonic fighters outrun, and outclimb you, so while you are more manoeuvrable, you are relatively slow. Fighters such as the F-5C pull a lot of AoA at high speed. Your plane also compresses, so if you want to reliably dodge these aircraft, you need to actually slow yourself down to ~950 km/h, where you have optimal elevator, aileron, and rudder responsiveness. High-speed manoeuvrability is the only con of this plane, but you should only keep yourself slow when it's appropriate to do so.

The Soviet MiG-17 was used quite extensively by the PLAAF in the early Cold War era. A production license for the more advanced MiG-17F model, which featured an afterburner, was obtained in the mid-1950s, and the result was the domestic Shenyang J-5, which made its first flight in 1956. In 1961, plans were obtained for the license production of the radar-equipped MiG-17PF model, but the ongoing Sino-Soviet split led to issues with the Chinese industry that delayed the first flight of the "J-5A" to 1964. At this point, the aircraft was rather obsolete, with the supersonic age being well underway, and production only continued for a few more years. Fewer J-5s were produced than the later J-6.

Shenyang F-5 -It's a Long Way To The Top - Napalmratte
Is the Shenyang F-5 Worth Your Money? - DEFYN