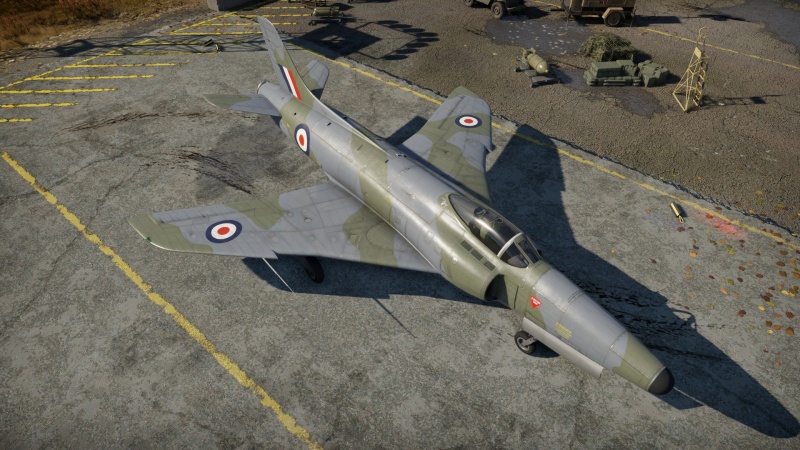 The Swift F.7 was the last variant in the line of Swift fighters produced by Supermarine Aviation Works. This fighter was one of Britain's fighters to come out of the early 1950s. Post-war England saw new leadership which made the faulty assumption that for the next ten years or so, no new major conflict would happen and therefore defence spending, research and development on new aircraft was reduced to a trickle, mostly experimental prototypes made for research purposes. 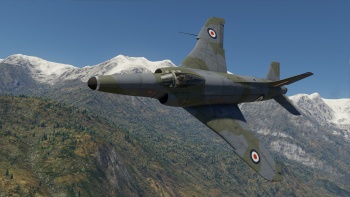 Though never seeing combat during its short career, the Swift F.7 has an opportunity to make a name for itself in War Thunder. Not as fancy or bristling with weapons like a Sabre or a MiG, the Swift F.7 has its place in the sky and can dance with the best, and even shoot them down. Armed with two 30 mm ADEN cannons and two Fireflash air-to-air missiles, while maintaining between 700 and 810 km/h, this fighter can get the best of even superior aircraft it may go against. Its slower speeds may allow for an overshoot of an enemy aircraft which may place it in front of the Swift's gun sights or even for the radar beam riding Fireflash, of which the enemy pilot will have no indication it was launched unless they are diligent about watching behind them. In the right hands, the Swift F.7 and its weapons have the ability to humble enemy pilots and their superior aircraft. 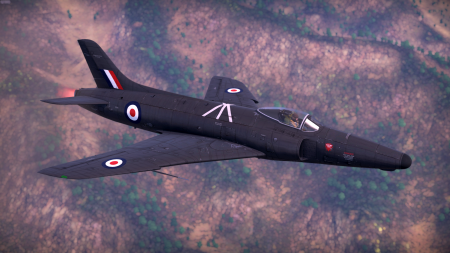 The Swift F.7 is a good fighter which excels in playing the interceptor role, however like the three bears from Goldilocks' story; this jet has a sweet spot in speed where it does well. Like many jets, this one does not do so well when slow and it becomes an easy target for others to attack. On the other hand, flying too fast causes the controls to lock up, preventing any real manoeuvring at all and, if playing in realistic or simulator battles, ripping off the wing-tips is a very real problem when moving too fast.

The sweet spot or "just right" speed zone for the Swift F.7 is between 700 km/h and 810 km/h. Here the jet will have sufficient speed to properly manoeuvre. Diving either to shoot down another aircraft or to get away from someone on your tail can be a challenge as doing so can result in the aircraft superseding the 810 km/h threshold (easily going into the mid 900s) and end up a sitting duck unable to maneuver or if close enough to the ground turning into a lawn dart because it could not pull up due to the control surfaces locking up.

Speed management is key to survival - the afterburner can aid with increasing the aircraft's speed if slow - and with the afterburner the aircraft has a really good climb rate - it can accelerate significantly even in a steep climb. However, slowing down to keep from going too fast is a major problem because this aircraft does not have an air brake and just reducing the throttle will not help very much. Two options are available to reduce speed in this aircraft and the first is to deploy landing flaps. The landing flaps have been reinforced and should not rip when used to slow the aircraft down and can be deployed and retracted as needed. Another option to help bleed off any unnecessary speed is to lift the nose of the aircraft (pull up or back on the control stick). Placing the fighter into a nose-high attitude will help with decreasing speed to a safe zone when the pilot can resume normal flight. 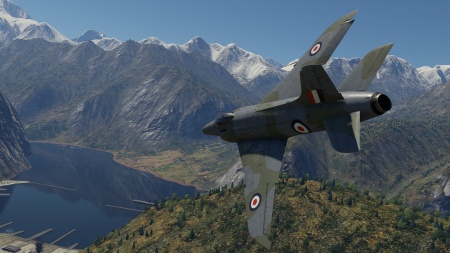 This aircraft has been outfitted with two 30 mm ADEN autocannons. Though they are mounted on the fuselage resulting in not having to configure for convergence the pilot will need to account for both autocannons being mounted on the right side of the aircraft fuselage near the right air intake. Pilots which are used to having balanced machine guns or autocannons (equal amounts on both left and right side) will need to slightly adjust their aim to ensure the bullets don't miss just to the side of where they would normally aim. The ADEN cannons when they do hit their mark usually result in a critical hit or a destroyed aircraft with wings flying in one direction and tail sections going in another. 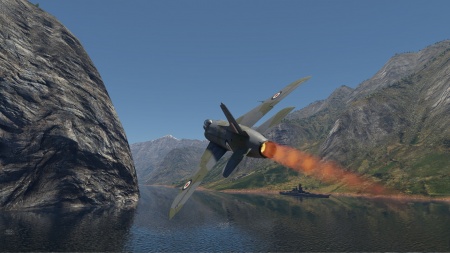 The Swift F.7 is played similar to the Hunter as more of a Boom and Zoom aircraft. The aircraft has a sweet spot for its manoeuvrability around 800-900 km/h. Above those speeds, doing a hard turn can result in a ripped wing. It is generally advised to keep some altitude with the aircraft. The missiles are SACLOS-guided and can be useful in headons. But for the drag that you get with the missiles it might not be worth it carrying them in the first place. The vehicle has an afterburner which results in a very good acceleration.

The Swift F.7 is equipped with an AN/APG-30 rangefinding radar, located in the nose of the aircraft. It will automatically detect other planes within the scanning area and display the range to the closest target. It is linked with a gyro gunsight and can help with aiming at close range.