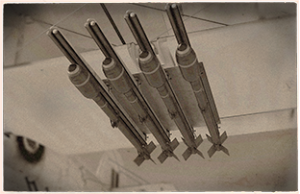 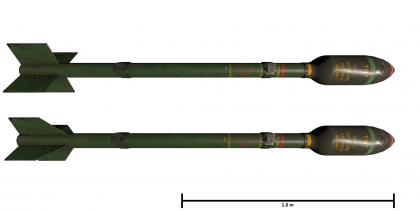 Naturally, some vehicles might have certain advantages that allow them to use the RP-3 more effectively:

The Hurricane family: Due to their agility, resilience, sufficient payload and low battle rating, they can serve as dedicated ground strike aircraft, just as they served in real life. A master example is the Hurricane Mk IV.

The Swordfish: Despite being an old and very, very slow naval plane. The RP-3 turns it on a dangerous opponent, small patrol boats are totally anahilited with the RP-3 payload . It enjoys low battle rating battles with poorly armored vehicles, a perfect combination.

Meteor "Reaper": Just the fact of having one of the highest number of RP-3 availables to launch, make this jet fighter a superior ground attack platform choice to test the RP-3.

Cromwell V RP-3: This variant is highly unique and powerful at the same time. The RP-3 increases the potential of this Cromwell variant.

Whilst theres many more remarkable; The Typhoons, The Beaufighters family and Sea Hawk are also extremely good users of the RP-3.

These rockets will create a lot of damage post penetration thanks to the SAP characteristics. If the target is too far away to get a successful penetration of the armour (beyond 1,500 m). The explosive air blast damage can cause splash damage which is able to penetrate up to 44 mm of armour in any direction, along with the overpressure damage.

Some examples from the ballistic analysis prove the lethality of the RP-3 against ground targets:

The rocket payload allows you to aim more flexibly to one or several targets depending on the ability to efficiently spare them. While the bombs despite being more powerful and deadly, lack in numbers. This is a shared trait of most of the RAFs aircraft equipped with these two ordnance choices.

One of the main drawbacks of these rockets it's the lesser efficiency on heavier armoured vehicles, for example, The Maus, KVs, destroyers, and cruisers. 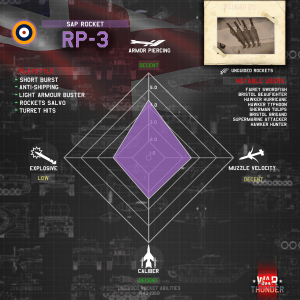