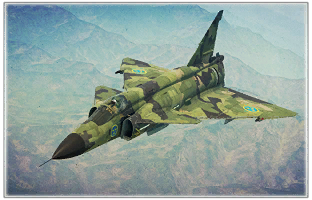 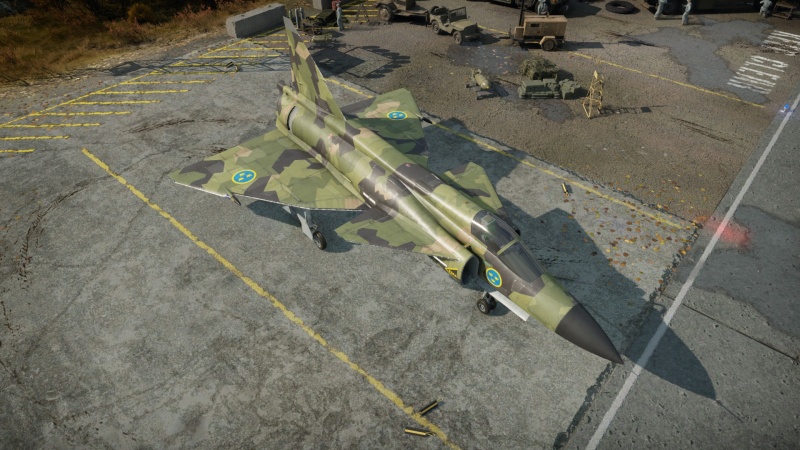 The JA37C, being primarily a fighter-interceptor, is not equipped with any armour plating. Fuel tanks comprise much of the fuselage and wing area, and a fire will usually mean death. The elevons on the wing handle both elevator pitch and roll, so losing even 1 will make the plane nearly uncontrollable. Avoid damage at all costs, as even a damaged non-critical component will likely cause drag, making flight performance worse. As with most top tier fighters, it becomes much more challenging to fly with even a slight amount of damage compared to lower tier planes.

The JA37C is armed with:

The JA37C can be outfitted with the following ordnance presets:

The Viggen is a simple and effective plane to use in realistic battles. You will notice on take-off it is a bit sluggish and won't accelerate very well, as it is heavy, but once you're above 700 km/h the thrust and aerodynamics help you accelerate better from here. The Viggen performs better compared to most fighters at lower altitudes (3,000 m and below) in terms of manoeuvrability and top speed. Taking advantage of your top speed, Pulse-Doppler radar and Skyflash missiles, you can be aggressive and hit the battle early and at low level to take out any attackers using your useful radar set with your SARH missiles.

If you want to be more conservative, you can hang with your team and go around the side. The Viggen has very high rip speeds, getting some altitude and coming into the fight at a supersonic dive can be very effective if you maintain your speed trying to find targets for your Skyflash missiles. If in a head-on, the Skyflash can hit targets about 6 km away at sea level if they don't change direction. It is usually very effective and hard to dodge the agile Skyflash if launched in a head-on at around 3km. The motor will still be burning and your missile will maintain energy to the target. If in Pulse-Doppler mode, the radar will no longer track a target if it starts to turn at a 90 degree angle (this is called beaming). The radar will lose lock and the missile will be unable to track if this happens. If you have enough time, you can potentially switch to the AIM-9J to try to get a lock behind the target from here, though keep in mind your enemy's countermeasures. In a last resort, you can use the gun, essentially an Aden, it hits hard, but it is very hard to aim due to its placement (under the fuselage) and the lack of tracers.

Try to stay out of any extended dogfight, especially if your opponent has any support. Though it is considerably manoeuvrable at all speeds, the Viggen won't do well in any dogfight with sustained turns, as it will just bleed too much energy and being too slow is almost certainly fatal. It is heavy, slow to accelerate and a big target. So get fast, and stay fast. Bringing a full tank of fuel is generally recommended as the Viggen's afterburner uses incredible amounts of fuel, though the engine is quite strong in a climb.

During the 1960s, advances in technology occurred rapidly alongside the aviation industry, paving the way for more complex and capable designs. In order to keep up with the rest of the industry, SAAB had to develop aircraft at a constant pace, often coming up with replacements before the predecessor had even entered service. The SAAB Viggen was sought to be the replacement for the A32A and was being considered as early as 1952. The decision of whether to make a fighter or attacker design continued for years. By the end of the '50s, project 1500 started to show potential, with a delta wing design capable of performing multiple roles through different versions. The wing design would allow for short-distance take-off and landings, following the BAS60 roadbase system requirements. These also included all-weather capability and full coverage of the 2,000 km Swedish coastline.

The 37-1 prototype took to the skies in February of 1967. The design still had to go through extensive modifying before the plane could reach the production line. The canards were angled, the wing adjusted, and the fuselage bent slightly. Much of the unorthodox appearance of the Viggen arrived from the extensive testing done on the first prototypes. When finalized, an order of AJ37 Viggens was handed over to F7 Skaraborg, becoming the first division utilizing the aircraft. 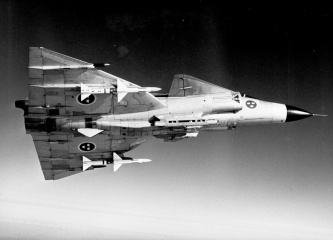 With the Viggen successfully replacing ageing attack and reconnaissance aircraft, the focus shifted towards the replacement of the J35 Draken. This required extensive modifying of the Viggen as a whole, as the requirements for an interceptor wouldn't be met with the powerplant and avionics used in the already existing variants. The project was extensive, redesigning most areas of the plane to fit these specifications. SAAB had to fit an internal gun, an air-to-air radar, and a new flight computer which allowed a real-time data-feed between ground stations and flight groups. One of the more complicated adjustments was the powerplant, where the engineers had to install an additional fan stage. This helped counteract the compressor stall the RM8 engine often experienced at high angles of attack, allowing the JA37 to dogfight more comfortably. These modifications were expensive, exceeding the set budget several times. But SAAB pressed on with the design until the version was fully developed.

The first completed JA37 flew on November 4th, 1977. The first service variants were delivered to F13 Bråvalla in June of 1980, while F17 Blekinge and F21 Luleå received theirs in 1981 and 1982 respectively. The JA37 would go on to be the most produced variant of the Viggen, with 147 aircraft delivered between eight different divisions. The JA37 was highly appreciated by those who flew it, and saw many modifications that extended its lifespan.

As the 80s came to an end, the Viggen platform began to require an overhaul to bring the capabilities closer to that of other countries. The Gripen project was still years away from being completed, so an upgrade program began that would involve all JA37 in continued service being upgraded to the JA37C standard. This package introduced countermeasures, and a new signal processor, allowing the radar to track more efficiently against enemy jamming. The radar could now follow multiple targets simultaneously and also display virtual targets to enhance pilot training. This variant of the JA37 would see use up until the end of the decade, still being a capable platform for its time.

The requirements for a new aircraft with very high performance to replace the SAAB 35 Draken emerged in the early 1960s. In 1962, the design team of the SAAB company prepared a draft design of the SAAB 37 aircraft, built according to an exotic double delta wing. The project seemed interesting for military authorities , and SAAB received funding to fully develop a new fighter in four basic configurations. The last and most advanced version was the SAAB JA37 Jaktviggen fighter-interceptor, the development of which continued until the mid-1970s, which was associated with the improvement of the engine and the development of modern electronic equipment. The first flight of the experimental JA37 interceptor fighter took place in June 1974, and in 1979 the fighter began to be supplied for service. Until 1990, 149 JA37 Jaktviggen units were produced. The specific appearance made the aircraft of the J37 family a "calling card" of the Royal Swedish Air Force for a long time.