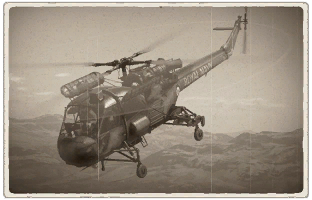 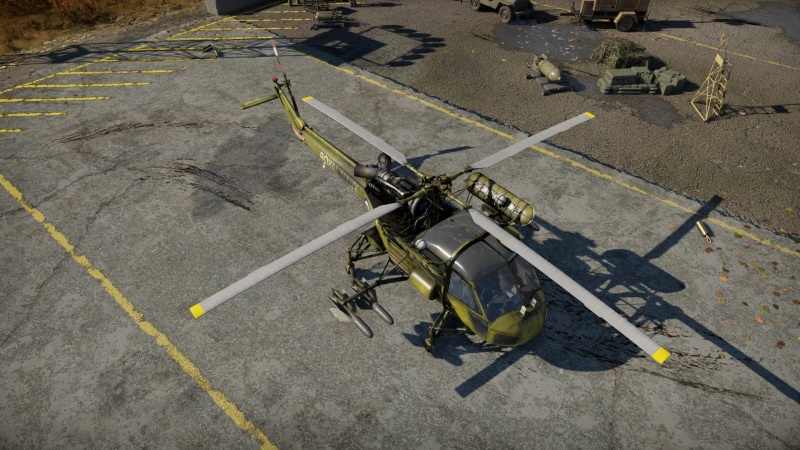 The Wasp is the next step along the British helicopter tech tree from the Scout boasting largely the same playstyle with some added challenges for any prospective helicopter jockey. The Wasp furthers the steep learning curve that is early British helicopters, with no armour or countermeasures to speak of, less mobility than its predecessor, and a lack of any fixed armament such as machine guns. However, for any pilot willing to put in the time, this featherweight will certainly sting like its namesake. With a small profile and retaining a good standard of agility; you can ensure timely delivery of the same punishing payload pilots will remember from the scout.

Even a stock Wasp handles very well, 70-75% on the collective (the 'throttle') will allow you to skim close to the ground at a steady pace while retaining comfortable mobility to perform approaches through the valleys and defilades the Wasp requires to close in and deliver its payload. You will not see much altitude gain unless you push past this however and the helicopter will begin to descend around the sub-70% mark but very smoothly. Use this to finely adjust when performing 'masking' tactics to engage enemy ground units.

The tail rotor boasts excellent performance when the collective is lowered below the 50% mark, however it can lock up at speed or if the collective is pushed higher towards the 100% mark. You can perform some very snappy manoeuvres in such conditions but attempting the same at higher speeds will result in a sluggish turn and in some instances a stall. If you need to turn and engage an opportune target or change direction and shift into cover, bleed speed carefully and lower the collective. The Wasp will reward you with a sharp about turn and swift relocation.

The Wasp holds a very steady, smooth forward flight. This can be a great boon in tandem with the stabilised gunner sight for daring ATGM strafe manoeuvres for the bold. But with the agility (If handled correctly) to allow a hasty retreat should things go south rapidly.

When compared to the Scout, the Wasp has less mobility, but more stability. It is extremely difficult to lose control of it even with basic arcade controls (though still not impossible). Out of the less obvious downsides, the engine has a tendency to choke at the worst moments until the helicopter is completely spaded.

The Wasp carries absolutely no armour on its airframe. Much like its namesake, while it can sting it should remember at all times that it is still a bug and can be swatted from the sky like one with incredible ease. All vital components of the aircraft are exposed owing to its function as a scout helicopter and its necessity for speed.

The aircraft may survive stray rounds and glancing encounters with infantry calibres provided the pilot is not hit. But at its BR it will very commonly encounter light tanks such as the Bradley, Marder, and BMP. Their rapid firing cannons often with high explosive rounds mixed into their belts will most of the time annihilate the Wasp with a single shot. As agile as this helicopter is, it cannot outrun a determined 20 mm.

Because of these factors, approaching the battlefield at all is not recommended and best left to the crazy or the overly bold rogues.

The Wasp comes stock with its only payload and owing to its fragility should not be overly concerned with mobility immediately. The flak jacket should be prioritised to help protect your crew from stray rounds that get lucky, then the NVD upgrade to allow you a better view hunting at night. After these, the rest of the upgrades will provide a slight improvement to the airframe but the speed benefits to position swiftly are the key.

The Wasp HAS.Mk.1 can be outfitted with the following ordnance:

The missiles carried by the Wasp are identical to the missiles carried by its predecessor the Scout AH.Mk.1 so the pilot should already be comfortable in their operation. The AS.11 missiles are SACLOS (Semi Active Command to Line Of Sight) guided munitions and must be guided for their entire flight. These missiles boast a relatively short range of only 3.5 km which for most pilots can be a distance to the battlefield one begins sweating at. With 600 mm of armour penetration on a flat surface ranging down to 300 mm at extreme angles, the AS.11 carries enough punch to defeat most if not all targets; however, with only 1.5 kg equivalent explosive of TNT as a payload, positioning the missile is critical. Aim at the top of turrets or the flanks of your target to try and knock out crew clustered in the turret or force an ammo detonation.

Only a single missile can be guided at a time, firing an additional while one is already in flight will 'cut the wire' and force the first missile to go 'wild', most of the time veering off course at a lazy angle and self-destructing after a while. The latest fired missile will be the only one being actively guided by the gunner sights and this weapon is extremely difficult to operate if your gunner is knocked out, leaving the helicopter with only approximated aim of the pilot (F key).

The Wasp HAS.Mk.1 will feel almost identical to its predecessor in the tech tree: the Scout AH.Mk.1. The helicopter is fragile and small but this time lacking the last-resort of fixed machine guns. Any assault from other helicopters or aircraft will almost always result in an unfavourable end for the Wasp, however enterprising and skilled pilots can still bite back with some masterful aiming of the AS.11 missiles and timing which will make short work of an enemy aircraft should it end up actually hitting.

Its small size will favour hit and run tactics or 'masking' tactics usually. That being, flying low close to the ground and out of sight, getting close to the battlefield and striking with one of its missiles, before fading away or rising and ducking down below the horizon from a 'sniping' perch. Cover and confusion are a pilot's best friends in the Wasp.

A patient pilot will be greatly rewarded by the Wasp, with immediate access to guided anti-tank munitions the Wasp does not need to make the same gambles a helicopter with only access to rocket pods or bombs may. But with the low-payload nature of its missiles and their slow speed and range factors, a steady and calm pilot must quickly figure out how to insert themselves where the enemies' soft spots are exposed. In the right hands the Wasp can comfortably stall an entire enemy push in support of its teammates, however every shot has to count with the Wasp's loadout of only four missiles.

With its tiny payload and lack of machine guns, the Wasp is a very poor pick for Helicopter PvE battles. Its engagement range is still outside of all SPAA ranges and its slow missile require attention throughout their entire flight. You cannot strafe light vehicles with your lack of machine gun armament and even if every missile hits you will only gain four kills and be stuck awaiting a reload as your teammates move in to engage the targets also. The AS.11s are the only loadout for the Wasp so taking rockets to strike gun emplacements is unfortunately not an option either.

If you must take the Wasp into PvE the best bet will be to play support as best you can, capture landing points and drop your missiles on SPAA or targets of opportunity when they arise but most of your gameplay will be spent in flight time.

The Westland Wasp was a British marine helicopter manufactured by Westland aircraft. Initially designed as a torpedo-carrying light patrol and scout helicopter, the Wasp was later modified to be able to carry the SS.11 (AGM-22) wire-guided missile. It gained the distinction of sinking a ship in combat, the ARA Santa Fe, which was sunk using AGM-22s and torpedoes during the Falklands War. The Wasp has been used by the militaries of several nations, but has now been retired and replaced with more modern helicopters.[1]

The Westland Wasp originated from a requirement for a new shipborne helicopter that was both small but could also carry two homing torpedoes - this was known as the MATCH (Manned Torpedo-Carrying Helicopter) program.[1] The Wasp was designed to operate in conjunction with its mothership, dropping its load of torpedoes on enemy submarines as directed by the mothership's sonar.[1]

The Westland design firm decided to design a new helicopter based on their successful Westland Scout design.[1] The original skid-type landing gear was replaced with a quad-set of wheels, while the rotors and fuselage were designed to be fully foldable to make the helicopter as compact as possible.[1] As well, the Wasp wasn't fitted with mounted machine guns, as they were deemed unnecessary for the anti-submarine warfare role. The first pre-production Westland Wasp flew on October 28th 1962.[1] 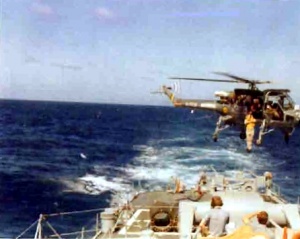 Following the end of testing, the Royal Navy ordered a total of 133 Westland Wasps. These aircraft served on a variety of RN ships, where they distinguished themselves as reliable search, rescue and anti submarine warfare helicopters.[1] Later on, the Wasp was given the ability to carry four AGM-22 missiles, which were license-produced variants of the SS.11 anti-tank missile developed by Nord Aviation.

The Westland Wasp had its largest success in 1982, when it engaged the Argentinian submarine ARA Santa Fe.[1] After a Westland Wessex helicopter managed to spot the submarine, three Royal Navy Wasps managed to fire several AS.12 (an anti-ship variant of the SS.11) missiles at the submarine, scoring hits. The damage suffered was enough to prompt the Argentinian crew to abandon the submarine, which was claimed by British forces and scuttled. The Wasp enjoyed a long service life, being retired in 1988 after the last Type 12 Rothesay-class frigates were decommissioned.[1] It was also exported to several other nations, and was used by the Royal Malaysian Navy until 2000. A total of 133 Wasps were built.[1]