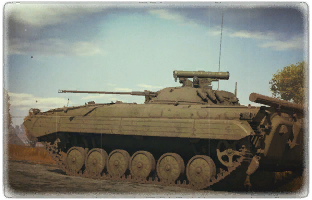 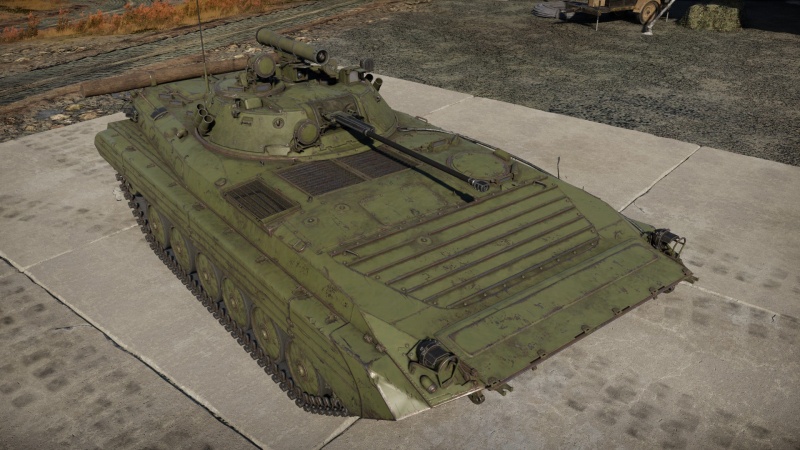 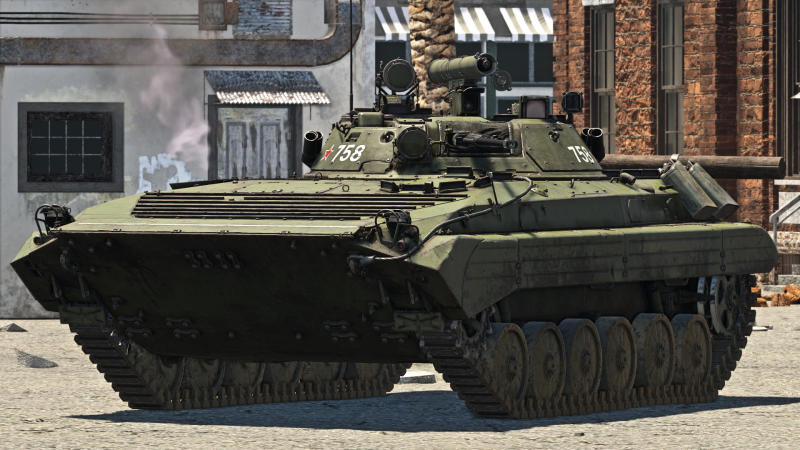 The BMP-2 armour layout consists of mostly High Hardness Rolled Armour. The front plate and turret armour is sufficient to stop anything short of a small auto cannon. The sides are generally resistant to machine gun fire, although larger calibre rounds such as those fired from the 12.7 mm .50 calibre machine guns on many American tanks can penetrate the side and rear of the BMP-2. Depending on where it is hit, the BMP-2 is generally not very survivable due to the low crew count. Having only 3 crew means that if any penetrating round kills 2 of them, you are dead. Some shots might hit empty space, but you should not rely on it. Generally it is best practice to be very careful when driving the BMP-2. Even if you have disabled the enemy vehicle's main cannon, they may still be able to damage you with their heavy machine gun. The BMP-2 is also vulnerable to overpressure, it will be destroyed by large-calibre HE shells and by ATGMs.

The BMP-2 has optional add-on armour which improves its resistance to heavy machine gun and some light cannon fire from the sides and rear of the turret, at the cost of losing its amphibious ability. This armour means that you are safe from enemy tanks once you have disabled their main gun. This modification has little effect on the overpressure vulnerability mechanics of the BMP-2.

The Shipunov 2A42 30 mm autocannon is a very versatile weapon - it is possible to change its fire rate based on the situation and it has vertical guidance of +74 degrees, which makes it effective not only against tanks but for planes and helicopters as well. 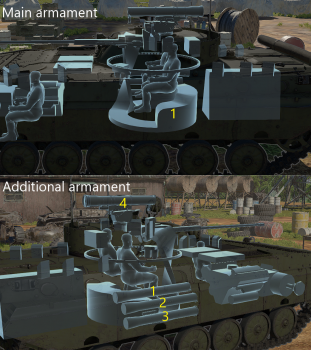 The BMP-2 is best played as a light support vehicle, avoiding being a primary target in the front of the battle.

Where possible, scout opposing vehicles for teammates while staying near heavier friendly vehicles, helping repair and support them as necessary. By staying mostly in cover and near more threatening targets, you'll avoid being a target yourself. The BMP isn't particularly fast for a light tank, but if you can move into a position that enemy tanks will be passing, you'll be able to make quick work of them with the 30 mm gun.

Before the armour modification has been researched, the players can take advantage of the amphibious capacities of the BMP-2 to either infiltrate in the enemy territory to scout or to flank that enemy access and retain the enemy advance; at least for a short time.

As an advance from the BMP-1, the BMP-2 offers a great improvement in combat usage, as there's no need to research the better ATGM armament. Another upgrade in the playstyle is the possibility of close range anti-air duties thanks to the 30 mm Shipunov cannon, particularly to the omnipresent helicopters at this rank, such as the American AH-1G. The cannon is also useful for light and medium ground targets with slightly sloped armour, however, the stock HE performance against armour is poor and the need for the APDS belt will be evident. Therefore the anti-air duties are an essential part of the early playstyle and module research.

The BMP is somewhat vulnerable to aircraft fire, particularly larger cannons will make quick work of the vehicle through its near non-existent top armour. Where possible, find positions with a good overhead cover or minimal visibility for overhead aircraft (beneath over-arching rocks, near or in buildings, under dense tree cover). If for any reason you do become the target of a strafing run, don't be afraid to fire back - the 30 mm will make quick work of most aircraft, and in head-on engagements is particularly easy to get on target.

It is recommended to improve the turret targeting speed with the modifications, as this provides faster target acquisition. The ATGM can also be put in use against any helicopter hovering close to the battlefield, remember the 3 km range when engaging them.

The BMP-2 is a light combat vehicle with good offensive power, as such, a recommended combat tactic is to remain near the tougher tank comrades assaulting and capturing points in the core of the action. Not only because of the proficient anti-air capabilities of the BMP-2 or the mighty Konkurs' ability to deal with any heavily armoured targets like the Maus. But also because the BMP-2 can act as a field mechanic for allied tanks along the frontline.

Acting as a team-player also entails using every mean of protection to ensure the teammates' safety, this will be usually achievable thanks to the various smoke discharges available.

The BMP-2 is not only capable of fiercely defending itself but is also capable of providing scouted targets for the whole allied team. Becoming the force of change in any assault or defence and a decisive piece in the road for victory.

A single BMP-2 can find a suitable covered position on a hill or a ditch deep enough (like on the Kursk map) and proceed to scout any enemy in the binoculars sight. It doesn't matter if the BMP does not have a gun solution, the purpose is to relay the enemy's position to the team while remaining in secret. This not only helps the teammates on anticipating any threats, but once the airstrike modification has been researched, it also enables the player to jump into any suited aircraft and continue supporting the team.