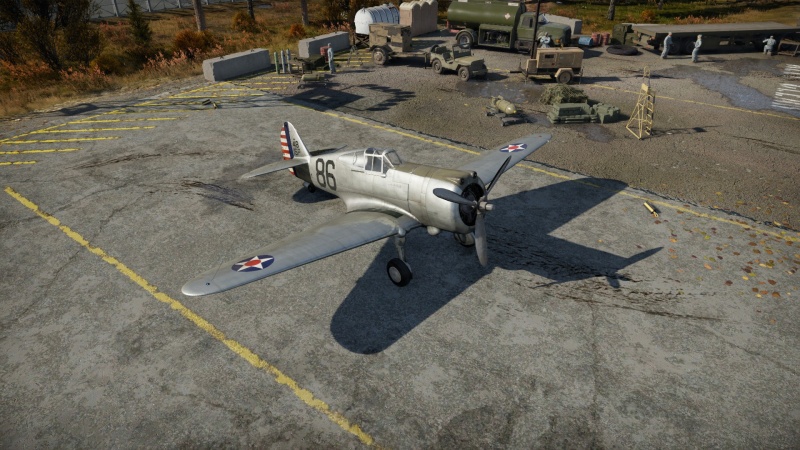 The plane is modelled after the one that Philip M. Rasmussen flew on the island of Oahu during the Japanese attack on December 7, 1941.

By May 1935 the first prototype flew and attained speeds of 450 km/h (280 mph) and reaching an altitude of 3,000 m (10,000 ft). It wasn't long before the original 900 hp Write XR-1670-5 radial engine was replaced with an upgrade Wright XR-1820-39 Cyclone at 950 hp and several modifications to the body of the aircraft was completed like the addition of scalloped rear windows which significantly improved the pilot's rear view (although the hump on the back of the aircraft still blocked a significant portion of the view).[2][3] This version of the aircraft was designated as Model 75B while oddly enough the earlier version with the 1670-5 was listed as a Model 75D.

For the P-36A, the armament of a single 12.7 mm and 7.62 mm machine gun is quite weak in comparison to the level of performance this aircraft is capable of. Later Hawks rectified this situation by adding two or four machines guns. For this aircraft, both machine guns are mounted in the engine cowl and fire through the propeller arc. The disadvantage to this is that the machine guns' rate of fire is limited by the fact they're synchronized with the rotating propeller. However, with these guns nose-mounted, there is little need to adjust for convergence. Options in ammunition will allow the pilot to select the type best suited for their mission whether it be as an interceptor, ground target hunter or a stealthy pouncer.