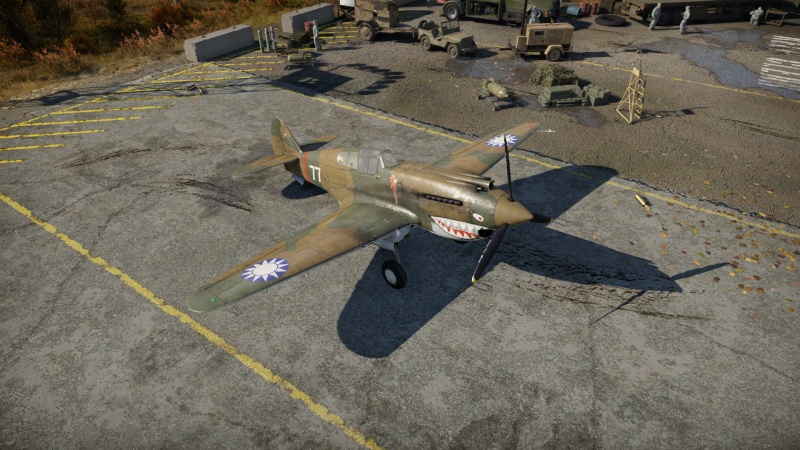 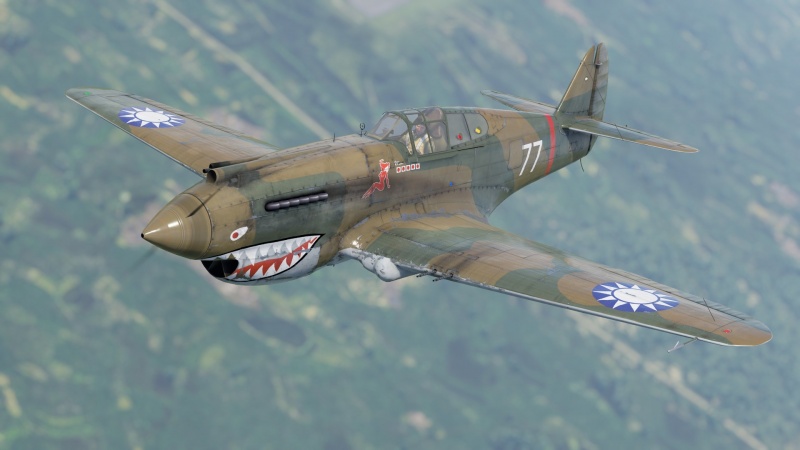 The H-81A-2 is a premium gift rank II Chinese fighter with a battle rating of 2.3 (AB/RB/SB). It was introduced in Update 1.91 "Night Vision" as a premium pack in the Gaijin store. It was removed from sale after the 2020 May Sale. It was later reintroduced as a premium vehicle purchasable in-game with Golden Eagles

during the 8th Anniversary Sale.

The H-81A-2 is an export version of the US P-40 Warhawk. Its appearance is very similar to the P-40C as it shares the nose-mounted .50 calibre machine guns of the earlier variants of the P-40, which allows a denser cone of fire in contrast to later revisions of the airplane.

The first method is to climb to altitude, and try to intercept enemy attackers and bombers. This tends to play in favour of the H-81A-2, due to its excellent top speed of 528 km/h (328 mph) at 3,800 m (12,467 feet.) That being said though, you are inhibited by its relatively slow rate of climb of only 10 m/s (32 feet/second). On the contrary, once you reach altitude, Boom & Zoom as much as you want against bombers, as your high dive speed will make it difficult for most gunners to target you. In addition, you have a nice turn speed of 21 seconds, which can allow you to snap over on some opponents with relative impunity. If you do find yourself fighting in the vertical, flaps will also be of use to you, as they do have a decent speed tolerance before they snap off.

In Ground RB, you are a nice ground pounder as there is a bombload of 1 x 500 lb bomb plus 2 x .50 cal MGs in the nose. When you spot an enemy ground unit, it is best to climb to around 1,500 m before diving at it. This way you have quite some time to distinguish your target as you dive down, and the speed gathered will also protect you. Recommended diving angle is around 30-70 degrees. Once you speed passes 520 km/h and the target fills up the reticle, pull the reticle right above the top of the target and release the bomb, it will land very close if not directly hit the target. If you cannot dive that fast, aim higher above the target before releasing bomb. After dropping the bomb, the nose-mounted .50 cals are good for strafing tanks' roof armour. Now you want to dive steeper for the bullets to pierce through. When diving, cut throttle and slow down to give yourself a long window to aim and burst, you must fire from a rather far distance since you need some time to pull up from the near-vertical dive. The 12.7 mm AP rounds are good at penetrating roof armour and knocking out crew/modules, giving you kills or assists.

Perhaps the biggest threat comes from facing any Japanese plane at this battle rating. They can turn so much faster than you as to bleed your speed and energy to the point of stalling out. The greatest threats come from the Ki-44s and the A6M2-N. In addition, the Ki-43 has significantly greater manoeuvrability than you. The vast majority of these planes have guns similar in calibre to a .50 Cal, which means that they have the firepower to dispatch you at a fairly fast rate. The H6K & H8K are very spacious flying boats, being most threatening in Simulator since it is much harder for the interceptor to aim precisely like in realistic battles. They have fairly deadly 20 mm defensive cannons facing backwards, so avoid tailing them from their six unless the gunner is unconscious. Engage from their sides or high six and aim for the wings. Your 2 x 12.7 mm + 4 x 7.62 mm MGs will cripple its wing structures easily or set it aflame if you are lucky. Don not engage if you have no altitude advantage.

The Germans have the most planes that can give you a problem, due to the vast majority of them having 20 mm cannons. Most notably are aircraft like the Bf-110 and the Bf 109 E-3. You also do have to worry about aircraft like the Bf 109 F-1, which has a 20 mm cannon in the propeller hub. While it is unlikely, you may also face the Fw 190 A-1. Most German planes will have a significantly better climb rate than you and be able to energy fight you more efficiently. As mentioned earlier, most German planes boast much heavier firepower than you, which renders you at a disadvantage in punching power.

Most Soviet planes will also give you a run for your money. Almost all of the Soviet planes boast only nose-mounted weaponry, giving them a significant advantage over most allied planes. The most common enemies to worry about are any plane with the prefix "Yak". Perhaps the most common cause of US teams being defeated by the Soviets, is the fact that they head on an IL-2. Never under any circumstance head on an IL-2.

In Ground RB, avoid SPAAs at all cost. If you are the only aircraft up and there are SPAAs firing towards you, get away from them. Although the H-81 is armoured by steel armour plates and bulletproof glass, it is still very vulnerable to calibre 12.7 mm and above shells. Direct hits will usually damage your huge cooling system which can result in a crash. However, if a teammate plane gets the attention of enemy SPAA, you can sneak up on them. At this BR, common SPAAs include M16, Flakpanzer 38 and Sd.Kfz. 6/2.

Heads up for German and Soviet pilots! While aircraft like the Bf-110, LaGG-3 and the Yaks have nose-mounted weaponry, an experienced H-81A-2 player can still make you pay dearly in a head-on. If you find yourself in a head on with a H-81A-2, fire a short burst, then hit the deck to avoid being hit by return fire. This is especially true with the Soviets due to their wooden airframe.