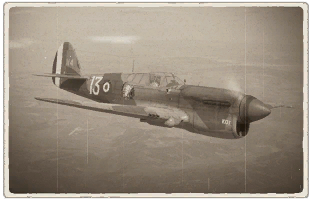 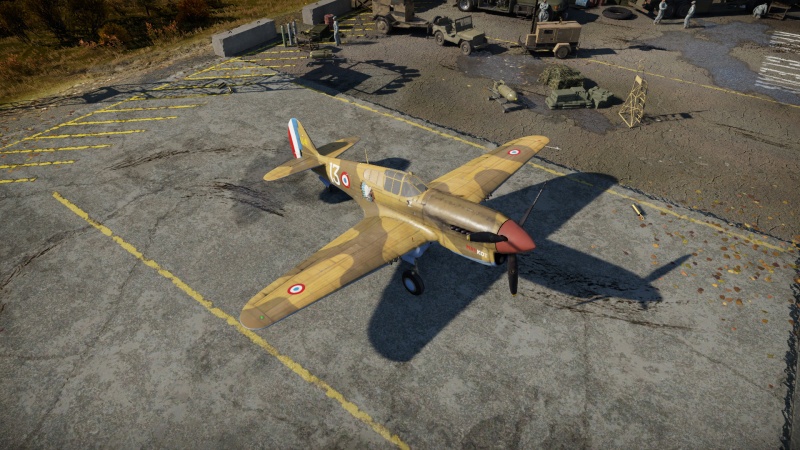 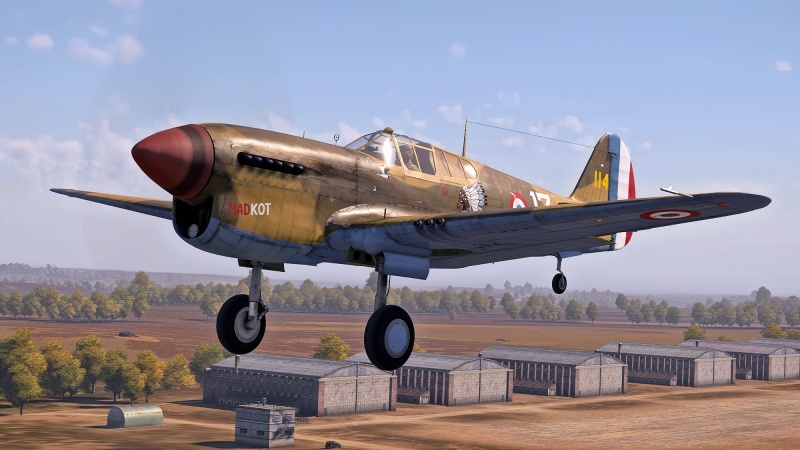 It is named after the French fighter squadron GC 2/4 La Fayette which at that time flew P-40Fs with the Free French Air Forces. The squadron exists to this day.

The P-40F-5 does not climb well so side-climbing is advised. The engine is best performing at low to mid altitudes of about up to 3,000 m. Utilizing WEP causes the engine to overheat very fast. The aircraft does not turn well at speeds under 300 km/h, but has a great energy retention, which makes it very suitable for Boom and Zoom attacks.

The oil and liquid cooling system are both located under the nose of the plane. When hit, both will leak out almost instantly and causes engine failure shortly after.

The most versatile ammunition belt for the machine guns is either the Universal belts that consists of AP/AP/AP/T/I bullets or the Ground targets belt consisting of T/AP/AP/AP rounds. The only difference between those two belts is the missing incendiary bullet in the Ground targets one. Both share the same penetration properties of 20 mm at 500 m at 0° and are capable of destroying or damaging a majority of tanks at this BR while utilizing attack from the top on turret roof or engine deck.

The P-40F-5 Lafayette (France) can be outfitted with the following ordnance:

The single 500 lb bomb can be used in mixed ground battles to destroy enemy armoured vehicles while the 2 x 100 lb bombs can be utilized to destroy soft targets like SPAAs or open-topped vehicles.

The P-40 is good at low altitude and turn-fights. Compared to planes like Bf-109's that it faces, eg the E-3, G-2s and F-4s, these aircraft can't keep up in a turn but are overall faster. The speed of this aircraft, 560 km/h makes it pretty fast for its rank and battle rating, however, this is only applied at lower altitudes. An important point to remember is that this aircraft cannot perform above 5,000 m. While it can eventually reach 9,555 m, it is all but useless at this altitude, since any aircraft it would typically meet at that height would have superior engines that work best at these altitudes.

When you dive on other planes, watch your speed! This aircraft is nearly uncontrollable at a speed of 600 km/h or faster when in dive. It is advised to stay at a perfect combat speed of 400 - 500 km/h. The Kittyhawk's 6 x 12.7 mm makes it very powerful for its rank because other planes have only started utilizing cannons and are typically outfitted with mostly lower calibre guns such as 7.7 mm or the like. The 1686 rounds of the 12.7 mm can be conserved, however spraying will cause the ammo count to reduce very quickly- hitting the target well ( wings and control surfaces )is very effective. An aware and good pilot can make up to 5 kills in a single round against human pilots. Watch your engine temperature when you climb- if you climb- as it will sit at an acceptable level of heating unless damaged. When diving, set the throttle to 0% to reduce temperature and speed when diving- the most embarrassing thing would be to crash into the ground due to control lock-up!

Since the P-40F can carry bomb payloads of 2 x 100 lb or 1 x 500 lb or 2 x 100 lb + 1 x 500 lb, it is a good attack aircraft for its rank. If you select the Ground targets belt you can destroy most land based units- even pillboxes; ground targets ammunition also works most excellently against aircraft.

In Ground RB, the 500 lb bomb can easily dispatch tanks at higher BRs, as long as you are accurate in dropping the bomb. Taking a leaf from the Stuka's book and diving from altitude is the best way to directly target heavy and medium tanks. You can climb to a higher altitude and look out for cannon flares and flak/machine gun fire. By using the zoom camera (bound to Z on PC by default) you can target and dive on an enemy vehicle. Make sure to drop from a reasonable altitude if the assault fuse is used as the shockwave and shrapnel from the blast will easily shred the P-40's airframe. Using a timed fuse will allow you to drop closer to your target safely but gives the target the chance to move from the bomb into safety.

The Ground targets belt is excellent at attacking open top and lightly/un-armoured vehicles like SPAA but beware that by targeting them you can be easily shot down by SPAA. Normally a quick but accurate burst can easily neutralise even the most stubborn SPAA units at its BR with the Kittyhawks 6 .50 cals.

Some concerning fighters the P-40F has to watch out for are the: