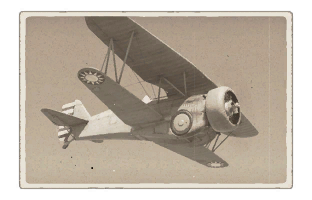 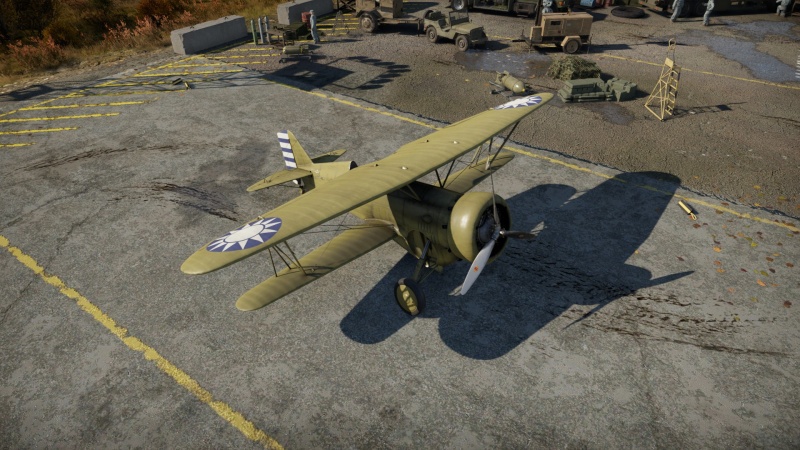 The Hawk III is a premium rank I Chinese fighter with a battle rating of 1.0 (AB/RB) and 1.3 (SB). It was introduced in Update 1.91 "Night Vision". Players should note that the Hawk III's landing gear takes an extremely long time to retract and lower, so when landing, you should lower the landing gear well before you think you should.

The Hawk III does not have any armour, and the pilot is exposed. There is one large fuel tank located in front of the pilot.

The Browning machine guns aren't particularly powerful, even for the low battle rating. The small calibre of the machine guns (one of the smallest in the game) coupled to their low number (only 2) leads to a very poor one-second burst mass. To deal damage effectively, one must learn to lead accurately and track consistently, landing as many bullets on target for as long as possible. Avoid firing a volley of bullets in the target's flight path with minimal lead adjustments and waiting for the target to crash into your line of fire, since this means that the target will get only a few hits. This tactic is more for heavy-punching aircraft like late-war interceptors, while planes with small one-second burst mass like the Hawk III will struggle to kill. Also note that the projectiles have a large circular spread, even with the New machine guns modification installed. Therefore when shooting from ~500 m away, expect a significant drop in hits. Nevertheless, with precise aiming, the MGs are still adequate for destroying the wooden biplanes that the Hawk III encounters. Against aircraft, the universal belt is most effective.

The Hawk III is very unique for a biplane fighter, as it has the ability to carry almost 1,000 lbs of bombs. Note that the 4 x 100 lb bombs will drop in 2 pairs, followed by the single 500 lb one. However, note that the full bomb load will impede flight performance quite significantly. Also, it is safer to set a bomb fuse of at least 2 seconds, since the Hawk III is a slow biplane, so dropping the 500 lb bomb when close to the ground will result in the player not being able to zoom out of the blast radius in time and getting destroyed by its own bomb.

The Hawk III is a very unique, fun aircraft to fly and has a couple of very interesting perks. It is very competitive as a biplane fighter, and also has the ability to carry a very substantial bombload.

In air battles, the plane can be approached in several different ways. The first, and simplest, way is to play the Hawk III as a fighter. Indeed, the aircraft is highly manoeuvrable (can turn competitively with most aircraft except the I-15) and has a good top speed as well. In this style, take off, and climb altitude a bit, and then engage any targets available. However, do not fly too aggressively as the aircraft can get itself into sticky situations where it is being pursued by multiple enemy aircraft. Make sure to fly with teammates, and work together to avoid a quick death. The 7.7 mm Browning guns are rather weak, but more than enough to destroy the fabric and wood aircraft that the Hawk III faces normally. Finally, note that the aircraft's landing gear is manually cranked, and takes up to ~30 seconds to retract/deploy. Keep this in mind, and always deploy landing gear early when preparing to land.

The second, and more interesting, playstyle of the Hawk III is to fly it as a ground attacker. This is particularly interesting because the Hawk the can carry a large bomb load of 900 lbs, split between four 100 lb bombs and one 500 lb bomb. If flying this way, try to avoid engaging in fighter combat, as the bombs will decrease the Hawk's flight performance significantly. As well, the bombs are all of a lower size, meaning that they are best suited for destroying softer targets such as armoured cars and AAA batteries. Finally, note that the 100 lb bombs drop in pairs. This means that, instead of hitting five targets, you will only be able to hit three targets. A tactic to consider is, upon takeoff, fly to the nearest cluster of howitzers, trucks, AAAs, light tanks, or pillboxes. Climb at a shallow ~5 degrees so you can gather up some speed to fly across the map quickly. When arriving at target area you will be around 1 km above the ground which is generally enough for some shallow dive bombing runs. Since the 100 lb bombs drop first in 2 pairs, find some light targets like light tanks or even trucks to deliver the bombs. The 500 lb bomb is better for heavier targets like pillboxes and medium tanks, or even ships. Since the Hawk III is quite slow, you want to aim the bombs slightly higher to make up for their lack of momentum. Once the bombs are out, use your MGs to strafe soft targets. Make sure to constantly scan your surroundings and above for potential enemies. If, luckily, no one comes after you when you finish your strafing runs, climb around the main battle area to gather some altitude and observe the fight to pick a target to engage. If someone does attack you while you are strafing, engage WEP and level out or even dive a little if you have space to gather up enough speed for evasive manoeuvres. When empty loaded, the Hawk III's manoeuvrability is generally on par with other biplanes which allows you to fight back. Its rudder is quite effective, so make sure to utilise it in your manoeuvres.

As with the aforementioned ground attack playstyle, the Hawk III is a great complementary aircraft for lower-tier Chinese lineups. The aircraft's great manoeuvrability and good suspended ordnance means that it can be used as a potent early ground attacker. The relatively large bomb load should be used against more clustered targets, to maximize the amount of targets hit in a single strike. Since most tanks around this BR are averagely armoured, the Hawk's 3 bomb drops can grant you at least 3 tank kills if you deliver the bombs accurately. As mentioned before, the Hawk III has poor manoeuvrability when fully loaded, so the time at which you spawn with this aircraft can significantly affect you CAS performance. The best times to spawn in is where there are absolutely no enemy planes in sight, typically in the early stages of a match, though it can happen any time. Or, there are some enemy planes as well as friendly ones. These situations will allow the Hawk to focus on ground targets. The worst situation is when your Hawk is the only aircraft of your team, and the sky is already filled with roaming enemy planes. This will most certainly result in you being chased and downed before you can even drop your bombload. So pick your spawning time wisely, observe the sky before spawning in the Hawk III.

As you spawn in and arrive above the battlefield, you will usually be around 700-1,000 m high which is enough for some dive bombing. Dive at around 45 degrees towards the target tank. This first bombing run will usually be quite fast since you have enough altitude to start with, and the Hawk III can accelerate up to ~440 km/h. As such, move your cursor slightly closer to the target as the bombs will have a flatter trajectory. Drop the bombs as late as you can for better accuracy, however you must watch the surrounding and pull up in time to avoid crashing. For later bombing runs aim slightly higher as you can be slower, resulting in a curvy trajectory for the bombs. If you see a SPAA firing at you, make sure to never get hit. The Hawk III is extremely fragile, just a few bullets will cause significant damage to your critical components like engine, or tear up the skin. The Hawk has extremely poor damage tolerance, so even if the engine or wings are very slightly damaged, the Hawk III will still lose plenty of lift and airspeed.

Once the bombs are out, there are 2 options. One is to stay at the battlefield and strafe tanks with your MG or fight incoming enemy planes, until you are destroyed. The second option is only suitable if you think the battle can take quite long to finish: to fly back to base and reload the bombs. Being able to destroy 3 more tanks from above is an attractive option, at the price of wasting at least 5 minutes flying back and forth because the Hawk III is remarkably slow even without bombs, thus losing the chance to help your team in the mean while. The choice depends on you and the battle's situations.

If you bring the Hawk III to higher BR battles where heavier tanks might appear, keep in mind that your bombs can be a game changer, as they can destroy these heavily armoured tanks that your teammates might struggle to penetrate. These heavy vehicles can potentially wipe out half of your team if left undealt with, potentially leading to a defeat. Therefore keep an eye on the killfeed and chat to see if these tough nuts are present. These tanks include but are not limited to Valentine, Matilda, B1, M4A3 (105), Ka-Chi, etc. Prioritise them and preserve your bombs for them, especially the 500 lb one.

In the Sino-Japanese War, the Hawk III planes acted as the Chinese front-line fighters against Japanese aircraft. While able to stand against Japanese biplane models, the appearance of monoplanes like the A5M shifted the balance towards the Japanese. As such, the Hawk III was slowly replaced by Soviet I-15 and I-16 fighter planes.