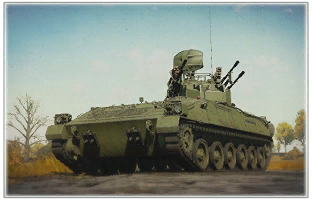 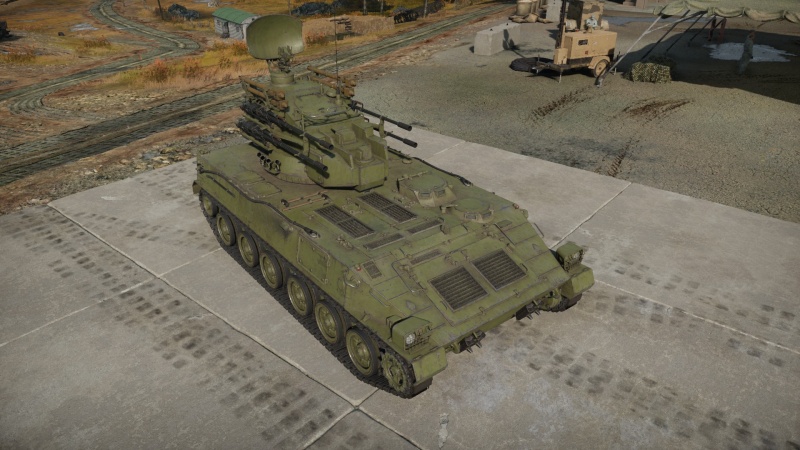 The PGZ04A is a rank VII Chinese SPAA with a battle rating of 9.7 (AB) and 9.3 (RB/SB). It was introduced in Update "Red Skies". PGZ is the Chinese PLA designation for its SPAA platforms. With PGZ being the Pinyin abbreviation for "炮，高射，自走" (Pao, Gaoshe, Zizou), or Lit. "Artillery, Anti-Air, Self-Propelled".

An upgrade to the previous PGZ95 in PLAGF service, PGZ04A provided reliable firepower against aerial targets that get too close to its 25 mm autocannons or its MANPADS, with sufficient mobility and ammo pool at disposal.

An usual characteristic of a SPAAG is their light armour, and the PGZ04A is no exception. At only 22.7 tons, its does not have any high protection and is very unlikely to survive any high-explosive and overpressure damages.

The chassis of the PGZ04A is still enough to stop 12.7 mm rounds from going through it up front while that would not be the case for the sides and the rear of the chassis so at best keep your enemies in front of you. The turret, with only 8 mm of steel on every side, barely stops shrapnel and smaller-calibre firearms, anything above 12.7 mm can penetrate the turret with ease.

Thanks to its light weight and a 383 hp F12L412 diesel engine, the PGZ04A can drive at a surprising top speed of 53 km/h, making it a fast and nimble enough vehicle to move around the battlefield and take cover if anything is coming to cause you some trouble. Another rare advantage is the great reverse speed of -18 km/h. Being significantly faster than the majority of Chinese vehicles, this speed not only allows the PGZ04A to retreat back to safety in time but also gives it more tactical agility for repositioning and flanking.

With its above average velocity and high rate of fire, these 4 cannons combined can cause total annihilation of low-flying aircraft within its 2.5 km firing range and its ammunition has sufficient penetration to cause some trouble to lightly armoured vehicles. However, all this comes at a cost: you have only 1,032 rounds in total at your disposal. For players who are trigger-happy, this might a good chance to learn how to conserve their ammo and wait for the chance to deliver the fatal blow to enemy targets.

The HN-6 is a MANPADS that comes with a 6 km all-aspect locking range, which will prove useful for handling low-flying helicopters and sometimes earn a surprise kill on careless jets; but do note that smaller helicopters or those with heat-suppression would have to be within 2.5 km before the probe can lock onto their heat signature, so only fire upon those who gets into 2.5km radius.

With its rapid-firing 25 mm guns and IR missiles, the PGZ04A does serve its purpose in close to mid-range air defense. Consider it to have two layers of defence: missiles for up to 6 km (depends on the target; it can lock onto jets at around 5 km; while helicopters is another story depending on its size and their heat signature), and the 25 mm cannons for anything within 3 km. The IR missiles have questionable tracking ability and often give up track on a target entirely if it manoeuvres to evade. However, it will help to distract incoming aircraft and bleed their speed, making them easier to be finished with the 25 mm cannons. The PGZ04A will have a tough time dealing with helicopters hovering at their maximum range launching ATGMs, as neither of the PGZ04 armaments can reach anything that's beyond 6 km.

The PGZ04A's anti-ground ability is limited, due to its smaller calibre 25 mm cannons. They have no dedicated APDS rounds that were found in its predecessor, the PGZ09 (which also has larger cannons of 35 mm). The 25 mm struggles to penetrate the sides of top-rank MBTs, with some of them completely immune (for example, Israeli MBTs which has better side protection), although exterior modules can be quickly destroyed, especially tracks. If aimed well (and some luck), you can take out gun barrels of the enemy tank, but it is better to avoid engaging with MBTs to begin with. The 25 mm rounds also have poor post-pen effects, even against thinly armoured targets, but is counteracted by the high firerate and fire density of the 4 barrels.

It is suggested to play the PGZ04A as a dedicated anti-air platform. However, due to its shorter range than its counterparts, you need to leave the spawn to be effective. While doing that, always have friendly tanks to screen you, as the moment you're caught alone by enemy ground targets you will have exceptionally low chance of survival.

The story of PGZ04A goes back to his predecessor, PGZ95.

During the 1980s when Mainland China was seeking for modernization of PLA, one major inventory they were lacking of was a SPAAG with onboard radar. It was during that time Egypt handed in some ZSU-23-4 to the Chinese, which at first decided that they would go for a reverse-engineered version of the infamous Shilka. But later, they found another major problem: Shilka's optical system wasn't designed for all-weather operations and capabilities at night would be very limited. Meanwhile, another group of PLAGF's officials often went to Europe for equipment development exchanges and weapon tests, one time during the 1980s, they saw the SIDAM 25 that came with all-weather operation capabilities .

The NORINCO Northwest Institute of Mechanical & Electrical Engineering (西北机电工程研究所 at Xianyang City, Xi'an, Shaanxi) started its development and eventually, the older brother of PGZ04A- PGZ95 was accepted into PLAGF commission and it was first shown on the parade on 1st October, 1999 (the 50th National Day of PRC) based on PZD31 chassis. Completed with a S-band (Note, IEEE standard) CLC-1 search radar and opto-electronic tracking system, as well as 2 pairs of QW-2 MANPADS mounted on its turret. Due to the new electronic system, estimations showed that a PGZ-95 was even more expensive than a brand new ZTZ99.

Later in the 2000s, the PGZ95 received an overhaul upgrade on its systems and upgraded its MANPADS to 2 pairs of HN-6 (exported by CATIC as FN-6), eventually this upgraded version was named a PGZ04A. Along the PGZ09, it became the cornerstone of PLAGF's field air defense with HQ (HongQi 红旗; Red banner) series SAMs.