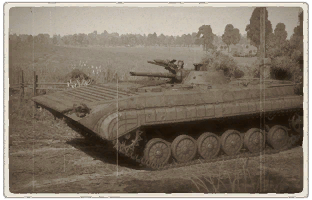 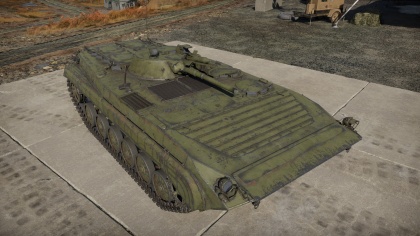 A Chinese variant of the BMP-1, the ZBD86 is externally identical to the original Soviet version when stock. But this vehicle has a hidden secret: as of Update "Raining Fire", the ahistorical BMP-1P modification has been replaced with the "ZBD86 Late". This equips it with the HJ-73E ATGM, a very powerful derivative of the original "Malyutka" with SACLOS control and a tandem warhead. As the ZBD86 is currently the last Chinese light tank in the game, the HJ-73E allows it to remain useful even when brought to higher tiers.

The ZBD86 is a shoot-and-scoot type of vehicle as an exposed ZBD86 is a dead ZBD86 - avoid being a target at all costs. Use your mobility to find reasonable sniping spots (for your ATGM) and only use your cannon if an enemy is close and unaware of your presence. Remember that if anything sees you, it can destroy you - even a .50 cal will make quick work of the ZBD86 from the sides or back.

The ZBD86 has very little to speak of in the armour department. Minimal frontal and nearly non-existent side armour results in the vehicle being vulnerable to almost any incoming fire. As such, the vehicle's survivability stems entirely from its mobility and reasonably small profile. Where possible, utilise hills or other cover, only exposing as much of the vehicle as is necessary to engage an unaware target.

Despite the lack of armour, however, the ZBD86 will, on occasion, survive hits unexpectedly - the internals of the vehicle are largely non-critical and many rounds will over-penetrate.

The ZBD86's mobility is reasonably good, although somewhat lacking relative to other IFVs. Despite that, once it gets moving it can travel at a decent pace.

Be aware when attempting flanking maneuvers and early pushes that there are vehicles with better mobility characteristics, and in many cases you'll encounter a vehicle before reaching a desirable position.

The 2A28 main cannon, despite being the 'main' armament will more often than not act more as secondary armament, at least once the BMP-1P upgrade is researched, due to the 9M113 ATGM proving significantly more controllable and effective at all engagement ranges. Despite this, the PG-9 HEAT round proves valuable in a pinch, with well-placed shots able to disable critical components on most vehicles the ZBD86 will face. Keep in mind that the ZBD86 does not feature any sort of stabilisation at all, and due to its light weight the gun is near impossible to get on target at speed.

Ammo racks of the ZBD86

The single ammunition rack consists of a shell barillet located around the turret basket.

The ZBD86 comes with a rail-mounted manually-guided ATGM as stock, initially aimed manually and with somewhat mediocre penetration and explosive mass values. While occasionally useful, generally the main gun is easier and more reliable to use.

Once the ZBD-86 Late upgrade is researched, the HJ-73 ATGM is replaced with a HJ-73E. Despite the new ATGM retaining the rail-mount, it is significantly more powerful and easier to use due to its semi-automatic guiding system. It penetrates more than twice as much as the original HJ-73 due to the tandem-charge warhead, at the cost of a decrease in explosive mass. This will go clean through almost any target that the ZBD86 can encounter, even those equipped with ERA or composite armor. It has enough penetration to go through the turret cheek of the basic M1 Abrams!

Keep in mind that the ATGM can only be fired when stopped or at extremely low speeds.

Ammo racks of the ZBD86

The ZBD86 comes equipped with a coaxial 7.62 mm PKT machine gun. This is only useful for clearing small obstacles or exposed crew in open-top vehicles.

The ZBD86, just like the BMP-1, is quite distinctive due to its oddly-shaped hull. The vehicle is crewed by only three (no commander), but is very spacious, so shots from the side occasionally cause minimal or even no damage. However, with only 23 mm AT MOST protecting the tank, it's a safe bet that hull breaks will be plentiful, especially when facing enemies equipped with APFSDS or HEAT. The ZBD86 is equipped with a short-barreled 73 mm gun (an odd calibre) firing exclusively anti-tank grenades. The projectile drop is extreme, albeit not the worst in-game, and it can be used to great effect against many of the vehicles the ZBD86 will face due to the consistent 300mm of penetration at range. The standard PG-9 ammunition has an explosive mass of about 1.25 kg. The trade-off, in this case, is the low velocity and relatively poor slope characteristics (the penetration drop in half if more than 60 degrees of slope). Finally, as standard, the ZBD86 is equipped with the 9M14 ATGM, capable of penetrating 400mm and carrying an explosive mass of 2.6 kg. It is WASD guided, and therefore somewhat tricky to use at first (and especially difficult to use in high packet-loss or high ping matches). An optional modification for the ZBD86 allows it to use turret-mounted smoke grenades as well as a next-generation missile, the 9M113. The ZBD86 (as of 1.77.2.149) is the earliest vehicle in-game to be able to use a SACLOS (mouse-guided) system for an ATGM. Not only is the missile nearly twice as fast as the 9M14, but it carries a notably larger explosive payload, and can penetrate up to 600 mm at 90 degrees at any range. As of 1.91, the ZBD86 can research NVD, which can help during night battles to help with visibility. NVD is available in commander, gunner, driver and outside viewports. Once purchased, the NVD modification also allows the use of a Infrared Spotlight to help illuminate targets if they are hard to see. However, it is mounted to the hull, and as such will require the hull to be rotated to illuminate anything.

In the 1950's, Soviet armored personnel carrier (APC) tactics consisted of lightly armored vehicles that would transport soldiers to combat zones, and then head back behind the lines to safety. During this time, the West German Bundeswehr was using the Schützenpanzer Lang and infantry fighting vehicle (IFV) tactics, where the vehicles would work with the infantry and tanks in order to support them, especially against lightly armored targets. The BMP was a Soviet IFV design created in the late 1950's. Some of the requirements were the ability for all of the infantry carried to be able to fire from within the vehicle, which was unseen before in IFV designs. It was intended to support the infantry and combat enemy light vehicles. The design placed emphasis on speed and maneuverability, potent armament, and sufficient armament to protect against 23 mm autocannons over the frontal arc. There was a debate over how the vehicle should be wheeled or tracked, and a number of options were explored including hybrid designs with both. The design that was chosen was a tracked vehicle with the engine in the front and the crew compartment in the rear; it was designated the Object 764. A prototype was created in 1964, and the final design was chosen in 1965 - an improved model called the Object 765. In service the production model was called the BMP-1.

China produced their own version of the BMP-1 called the ZBD 86, also known as Type 86. They produced a total of over 3,000 Type 86 vehicles of different variants. Over 1,000 are still in service today.