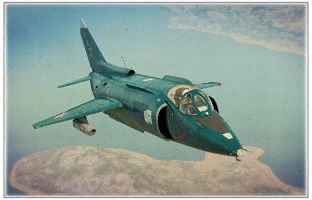 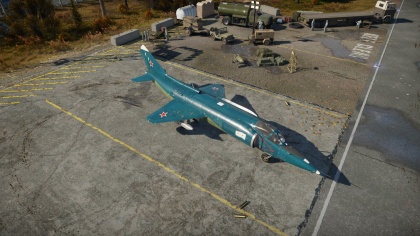 The Yak-38 is a premium gift rank V Soviet jet fighter with a battle rating of 9.3 (AB/RB/SB). It was introduced in Update "New Power".

Although Soviet engineers were experimenting with VTOL fixed wing aircraft design since the early 1960’s, it wasn’t until December 1967 before a formal order to develop a light VTOL strike aircraft as well as a corresponding trainer version was issued. As a result, engineers at the Yakovlev design bureau began work on the new aircraft in the late 1960’s, basing their design on experience gained from developing the preceding Yak-36 - an early VTOL demonstration design.

The new aircraft, designated Yak-36M, was being developed for immediate frontline service, operating both from land bases as well as aircraft-carrying ships. The aircraft’s primary role was that of a strike aircraft, engaging ground and surface targets while also being suited to intercept enemy aircraft and helicopters if necessary.

After some further testing and crew training, the aircraft officially entered service with the Soviet Navy in August 1977, receiving the designation Yak-38. By 1982, over 140 Yak-38’s were built, all of which served aboard the then new Kiev-class aircraft carriers. In the mid 1980’s, the modernized Yak-38M version came into service, most prominently featuring more powerful engines as well as other improvements. About 50 Yak-38M’s were built before the type was ultimately decommissioned in 1991.