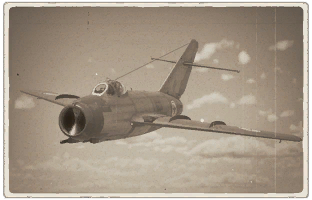 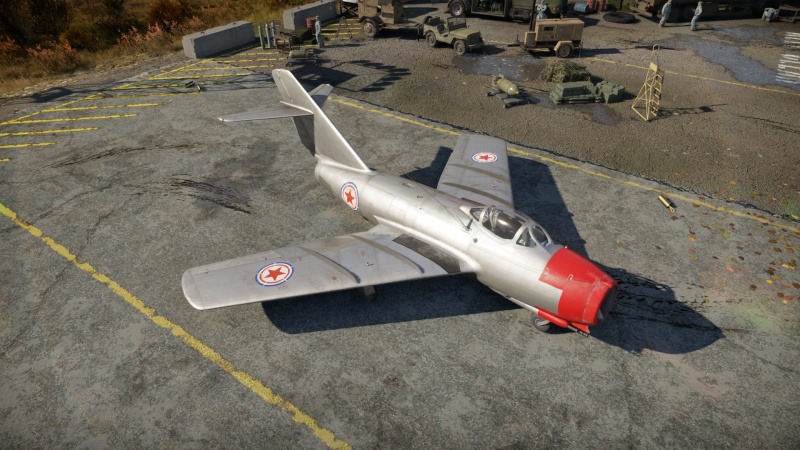 The MiG-15 is a rank V Soviet jet fighter with a battle rating of 8.7 (AB) and 8.3 (RB/SB). It was introduced in Update 1.35. The main differences between this aircraft and the MiG-15bis are weaker engine performance and 23 mm NR-23 autocannons.

The MiG-15, while being a successor of the MiG-9, uses swept wings which provide better performance at transonic speed. The other difference is the use of a single engine, the Klimov RD-45F. The plane is able to reach 1050 km/h at sea level and 994 km/h at 9,000 m, it makes the plane's speed very comparable with other jets at a similar battle rating. The climb rate is very high: with full fuel tanks it reaches 42 m/s and the plane can climb from sea level up to 5,000 m in slightly above 2 minutes. The acceleration is also great, thrust to weight ration when the plane is fully loaded is 0.44, which is significantly better compared to the F-86A, one of its main competitors, the plane also keeps its speed very well, especially at high speed. The engine can start overheating after prolonged flying at 100% of power, but it is quite easy to cool down, although when that happens it will keep overheating after switching back to max power so when it possible it should be reduced to 95% or lower.

The MiG-15's weight is very low in comparison to other jet fighters from similar era, it is only ~4700 kg and along with quite good wings aerodynamics and wing loading it makes the plane very manoeuvrable at low and medium speeds and makes it a very dangerous foe to any other plane when it comes to dogfighting, the only thing that slightly drags this plane down is its high speed turn rate, which is very underwhelming. The MiG-15 locks up at lot after reaching subsonic speeds and its rolling performance, which is already very average at medium and low speeds, gets very bad at high speed. It is also equipped with an airbrake that can help a lot with slowing down and it situations to make the enemy plane overshoot. Flaps while do not have very high speed limit can still make the turn fight at medium and low speed easier, as they increase turn rate by up to ~10% at a cost of increased drag.

When flying with simulator controls, it is very pleasant to fly: trimming is almost not required when the plane travels at high speed, insufficient roll rate can be improved by using the rudder, but that can also make it slow down. The plane can be stalled out even at high speed, and when above its critical angle of attack (AoA) it severely wing-stalls, throwing off your aim and/or your heading. Be very careful to not pull too much from the stick as to not reach this state, remember that it is one of the best rate-fighter of its tier, so it's best to pull a bit less to keep your speed and not wing-stall as you'll get into position withing a few turns.

The MiG-15 can be outfitted with the following ordnance:

At higher ranks of the Soviet aviation line, the MiG-15 series is one of the most iconic jet fighter aircraft designs from after the Second World War. Earning its reputation on fame over the skies of Korea against its US contemporary, the F-86A-5 Sabre.

The MiG-15 can be researched from its predecessor, the MiG-9. The MiG-15 features a powerful cannon arrangement of 2 x 23 mm and 1 x 37 mm, excellent high altitude performance and is highly effective in vertical manoeuvres. Unlike the MiG-9, the MiG-15 is also the first Soviet jet aircraft to feature an air brake which is extremely useful in combat situations. The jet fighter does, however, have its downsides. The lack of an "All-flying tailplane" (such as that featured on the F-86F-25) leads to less control over the aircraft at higher speeds approaching 1,000 km/h. While the MiG is initially faster in acceleration by comparison to the Sabre, this does mean that once both aircraft are up at higher speeds, the Sabre will hold some advantages over the MiG-15. It should be noted that if you load 8 minutes of fuel instead of the regular (for most pilots) 20, it drastically improves your performance. However, this is not recommended to be done at the beginning of the match as most matches last longer than 8 minutes, and should instead be done when you land mid-match.

The combination of 37 mm and 23 mm cannons creates aiming issues for pilots not familiar with their ballistic properties or velocity. Due to the size of these cannons, ammunition pools are restricted by comparison to other top tier jet aircraft. To help compensate the two different trajectories of the armament, it is recommended to use 'rolling' manoeuvres, as the rudder may lock in high speeds. To aim with these cannons, it is best to estimate the lead with the experience built up with planes beforehand (i.e.: Yak-9T / La-9) and add extra distance over the estimated lead (about double from the estimated).

Once pilots have learned to use the MiG-15s excellent rate of climb, acceleration and high altitude capabilities to their advantage, the downsides of the aircraft are far less significant than the positives. In the right hands, the MiG-15 can be a devastating combatant, capable of dealing with any aircraft in game swiftly. Teamwork, Squads and communication will also be beneficial when flying the MiG-15 as effective coordination between multiple pilots allow you to use this aircraft to its maximum potential. After mastering the MiG-15, you can research its improved variant, the MiG-15bis. As the MiG-15 is essentially a slightly merged MiG-15bis, it shares much of its performance issues and abilities.

First taking to the air in December of 1947, the Mikoyan-Gurevich MiG-15 jet fighter aircraft came as a massive shock to the west when it appeared in the skies over Korea in the early 1950s. The swept-wing fighter quickly proved itself as a capable and effective combat aircraft and forged a fearsome reputation.

The prototype I-310 was designed around the British Rolls Royce Nene engine which was purchased under license from Great Britain as the RD-45. Featuring sleek swept-back wings, tricycle undercarriage and the same armament as its predecessor, the MiG-9, in the form of 2 x 23 mm NS-23 cannons (Later replaced by NR-23 cannons in the MiG-15bis model) and a single 37 mm N-37D cannon all mounted centrally under the nose intake. The new aircraft was designed as an interceptor with heavy armament capable of quickly taking out bomber formations and was one of the most advanced aircraft in the world at the time.

Entering service between 1949-50, the MiG-15 made its operational combat debut in the Korean War, completely outclassing the first-generation jet fighter aircraft of the UN forces such as the F-80C-10 and F-84B-26. The MiG's excellent climb rate, high-speed performance and deadly weaponry proved superior to the early jets and was only challenged by the arrival of the F-86A-5. At the time, the Sabre was the only aircraft capable of effectively combating the MiG in aerial combat and the pair became synonymous with the conflict.

The MiG-15 was equipped with a RD-45F single-shaft turbojet engine rated at 2,270 kg of thrust with a double-entry centrifugal compressor. The plane's armament included a 37 mm Nudelman N-37D cannon with 40 rounds and two 23 mm Nudelman-Suranov NS-23KM guns with 160 rounds in total. The cannons were mounted in the forward fuselage on a lowerable carriage. Two 100 kg or 50 kg bombs could be suspended under the wings. To increase its flight range, the aircraft could carry two external fuel tanks with a capacity ranging from 250 to 600 litres.