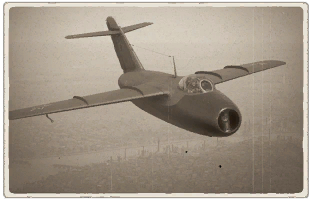 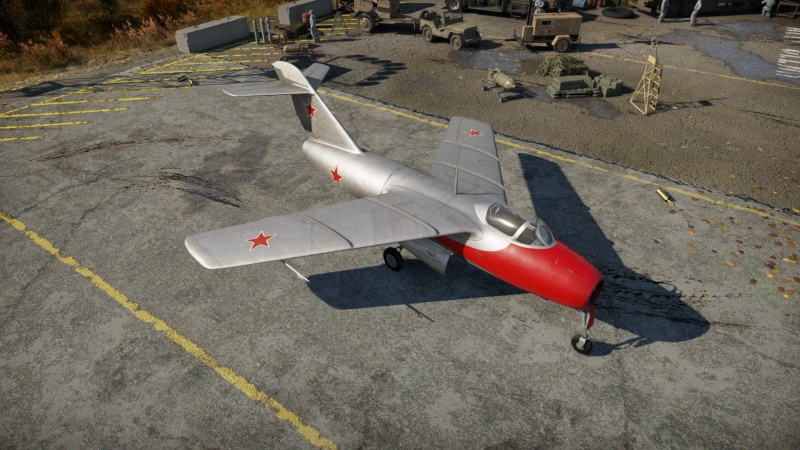 The La-15 is a special jet, it lies somewhere in the middle of the 8.0 jets due to its wings being incredibly weak for the engine it possesses and is one of the few planes that can break its wings clean off in level flight. However, due to the battle rating and the speeds that jet combat is usually fought at, you shouldn't need to rely on your top speed: The La-15 can be classed as an underestimated jet, relying on its performance at slow speeds (300 km/h - 700 km/h) to win battles of manoeuvrability.

The La-15 should be used in as an American Fighter when not in engagements (straight lines, absolute minimal turning to retain speed) and as a "jet-turn-fighter" when in engaged with enemy aircraft.

However, do the following:

F-86 Sabre/CL-13A Sabre - The F-86 Sabre is one of the main rivals of the La-15 if up-tiered and facing allied teams. The Sabre can easily outmanoeuvre, outrun, and out climb the La-15. The best way to counter the Sabre is to attack it when it is at its most vulnerable position (low on energy, or damaged) or force it into a low-speed manoeuvring fight. Do not try to engage an F-86/CL-13A Sabre in any high-speed manoeuvres or any high-speed dogfighting in general as the Sabre will come out on top. In any low-speed manoeuvres, the Sabre will lose to the La-15 in any manoeuvring engagements.

Meteors - The Meteor is another main rival of the La-15 as the La-15 can meet the Meteor at any time from being down-tiered to up-tiered. While the La-15 can outrun and out climb early variants of the Meteors, the later variants are far harder to outrun and outclimb as they can easily catch the La-15. The best way to deal with Meteors is to apply boom and zoom tactics, but do remember a skilled Meteor pilot will have no issue avoiding a La-15 that is attacking with boom and zoom tactics. Avoid any manoeuvring fights with any variant of the Meteor as they will outmanoeuvre you with no issues at all.

The La-15 has, at best, a speed limit of 1,000 km/h. Be aware of this and, if possible, try to out dive or outrun the La-15, as it can break its wings easily in a dive and in level flight. Its airbrake is ineffective in a hard dive unless the engine is turned off, so turn on an afterburner and keep it on until you have gotten into level flight. If you are slower than the La-15, Do not try to climb, break, or use an airbrake, the La-15 has very good energy retention in a climb and it's airbrake very effective at level flight, so refrain from these types of defensive flying.

The La-15 was a contemporary of the MiG-15 and Yak-30, that would see limited production numbers and remain in service through the 1950s in secondary roles. The NATO name for it was "Fantail."

Designer S.A. Lavochkin followed on his successful line of World War II piston-engine fighters with a series of jet prototypes in 1947. One of these, the La-174, became the basis for the production La-15. The fighter used a licence-built Rolls-Royce Derwent engine. A larger and more capable prototype, the La-176D, would be the first Soviet aircraft to break Mach (first in a dive in 1948 and then in level flight the next year) but never entered production.