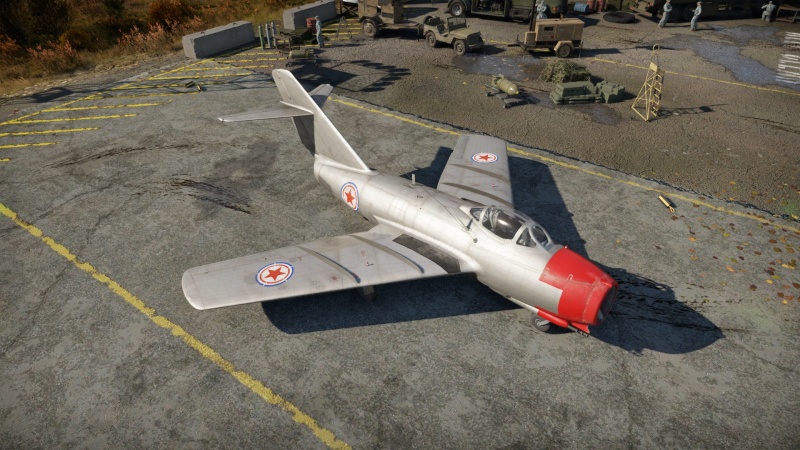 The MiG-15bis is a rank V Soviet jet fighter with a battle rating of 8.7 (AB/RB/SB). It has been in the game since the start of the Open Beta Test prior to Update 1.27.

The instrument panel on the MiG-15bis.

The MiG-15bis is an improved and definitive MiG-15 version, the main difference is the improved engine, the Klimov VK-1. Its level speed at sea level was increased by 26 km/h to 1,076 km/h, but it is still lower than many other jets like for example the F-86 series. The other noticeable change is a huge improvement of thrust-to-weight ratio which increased the acceleration by ~10% and it also has a huge impact on its climb rate, it can reach up to 50 m/s at low altitude with full fuel tanks, making the MiG-15bis one of the best climbing planes compared to other planes at similar battle rating. Like the previous version, it can not fly at max power for too long or it will start overheating. While decreasing the power to 95% or lower will cool it down for a moment, if you increase it back to 100% it will immediately start overheating again.

The manoeuvrability compared to the previous variant is basically the same, while this version is slightly worse at performing horizontal manoeuvres due to increased weight (by ~100 kg), it is now better at performing vertical loop and other similar manoeuvres because of the better engine. It struggles against other jets due to its overall poor handling characteristics (poor rudder authority at all speeds, poor roll rate at all speeds). At high speed, it does not suffer as much from compressibility but it is still at best mediocre. The elevator and rudder controls remained the same, so the plane still locks up a lot after reaching transonic speeds. Other features stayed the same: airbrakes help with slowing the plane down when it locks up too much and flaps help significantly increase dogfighting capability at low and medium speeds.

When flying with simulator controls, it is very pleasant to fly: trimming is almost not required when the plane travels at high speed, insufficient roll rate can be improved by using the rudder, but that can also make it slow down. The plane can be stalled out even at high speed, and when above its critical angle of attack (AoA) it severely wing-stalls, throwing off your aim and/or your heading. Be very careful to not pull too much from the stick as to not reach this state, remember that it is one of the best rate-fighter of its tier, so it's best to pull a bit less to keep your speed and not wing-stall as you'll get into position withing a few turns. Its improved roll rate (compared to the MiG-15) makes it easier to use against the planes it faces, but it's still less than its opposition

In-game, the MiG-15bis fulfils the same role as the MiG-15, primarily serving as an air superiority fighter and bomber interceptor. Armament is substandard in comparison to other countries, relying on low velocity weapons that are highly inaccurate, and situated below the fuselage, aggravating targeting angles during dogfights. It excels in vertical combat manoeuvres, taking advantage of its high thrust-to-weight ratio. The MiG-15bis also has a limited ground attack capability.

The MiG-15bis should be played like the MiG-15, using boom-and-zoom style attacks and keeping your energy high: speed is essential in jet battles. It wouldn't be a bad idea to try head-ons if you know your cannon's ballistics well. The 37 mm and 23 mm combo really help. The plane lacks in roll rate so you will have to watch out for other jets trying to reverse you.

The MiG-15 was equipped with a RD-45F single-shaft turbojet engine rated at 2,270 kg of thrust with a double-entry centrifugal compressor. The plane's armament included a 37 mm Nudelman N-37D cannon with 40 rounds and two 23 mm Nudelman-Suranov NS-23KM guns with 160 rounds in total. The cannons were mounted in the forward fuselage on a lowerable carriage. 2 x 50 or 100 kg bombs could be suspended under the wings. To increase its flight range, the aircraft could carry two external fuel tanks with a capacity ranging from 250 to 600 litres.