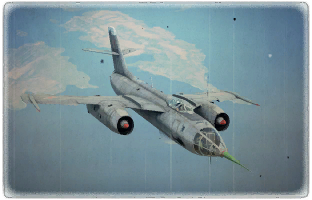 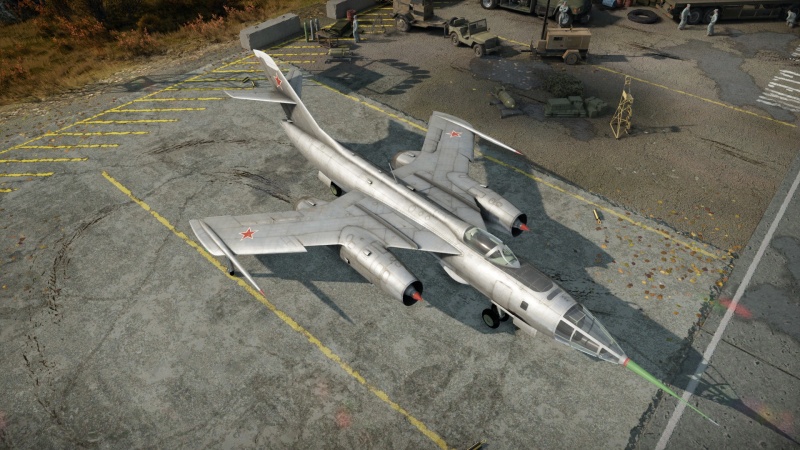 This bomber is relatively fast, it can break the sound barrier above 4,000 metres. It also has a very high acceleration, high energy retention and a very good climb rate. However, it has a very poor turn rate and experiences moderate compression above 1,000 km/h.

The Yak-28B can be outfitted with the following ordnance:

This plane is rather fast, has an immense acceleration, but turns also very poorly. This feature however gives it a good energy retention that allows it to juggle enemies if they get behind. The Yak-28B is also infamous for its very inaccurate bombsight in level flight, so to counter this con, you should consider diving at -20° or lower as it makes your bombs more likely to hit their target. The CCIP function is available, however, as it was installed in the bombardier nose, the function is only available in 3rd person view. Once your bombs are dropped, you can either bait enemies (if you have countermeasures) or quickly return to the airfield to get ready for another bomb run.

The Yak-28 "Brewer" is a swept-wing turbojet bomber used by the Soviet Air Force in the 1960s. In the late 1950s, the Yakovlev design bureau began work on an improved version of the Yak-26, which underperformed and failed to enter production. The new aircraft was powered by two Tumansky R-11 afterburning turbojet engines producing 57 kn of thrust each, slung in underwing nacelles. Otherwise, the aircraft featured a conventional configuration, with a 45-degree swept wing and a mid-tail-mounted horizontal stabilizer. The aircraft was primarily subsonic at low altitude but capable of 1840 km/h at higher altitude.

The first flight of the new aircraft occurred in March of 1958, and the western world first saw the aircraft at the Tushino Airshow in 1961. Initially, western analysts believed it to be a continuation of the Yak-25 fighter series, and was given the reporting name "Flashlight", but once its actual role was realized, it was redesignated "Brewer". The Yak-28 aircraft was ultimately quite successful in its role and several variants were created, including the Yak-28B tactical bomber, Yak-28P interceptor (armed with air-to-air missiles), the Yak-28R reconnaissance aircraft and the Yak-28U trainer. A total of 1180 Yak-28s of all variants were produced.