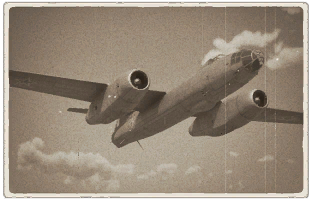 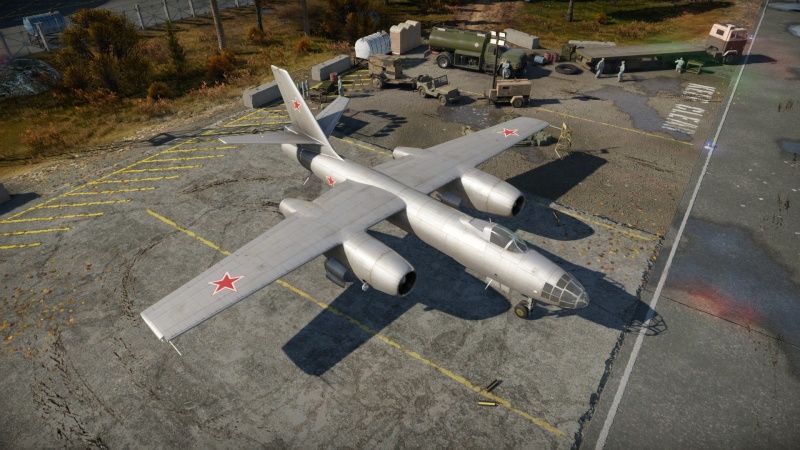 Unlike its American and British counterparts, the IL-28 features a heavy-hitting defensive armament of two 23 mm NR-23 cannons mounted in the tail barbette. This turret setup is unique in that it features an extremely high degree of manoeuvrability, able to almost fire straight up and down. This single aspect of the IL-28 is what truly makes it a legendary aircraft, especially among the War Thunder community. Often described as being able to fire "23 mm lasers", the IL-28's tail cannons are capable of equipping belts composed entirely of destructive fragmentation incendiary tracer ammunition. The NR-23 cannons also fire unusually quickly, which makes the aircraft's one-second burst mass very high. This makes the aircraft more than capable of defending itself, an invaluable asset in Rank V battles. There is also 102 mm bulletproof glass in front of the gunner along with a lot more armor, making him very hard to knock out. The IL-28 also wields two of these weapons in forward-facing positions under the nose, which allows the aircraft to destroy softer targets like AAA and artillery.

The IL-28 can be outfitted with the following ordnance:

The IL-28 was created to meet a requirement for a bomber to carry a 3,000-kilogram payload at 800 km/h (500 mph). Although there were several previous attempts to create such an aircraft the IL-28 was the first successful design. It incorporated the new Rolls-Royce Nene engines, produced as the unlicensed "RD-45". After the completion of testing in 1949, the aircraft was ordered into production on 14 May 1949, with the new Klimov VK-1, an improved version of the previous RD-45. The IL-28 was widely exported and was utilized by almost all of the Warsaw Pact nations along with various Middle Eastern and African nations. It was license-built in China as the Harbin H-5 and in Czechoslovakia as the Avia B-228. It is known to still be in service today in the Korean People's Air Force (KPAF). Although few in number, they provide North Korea with a means of strategically bombing targets.