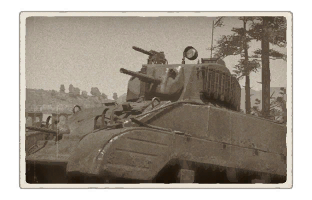 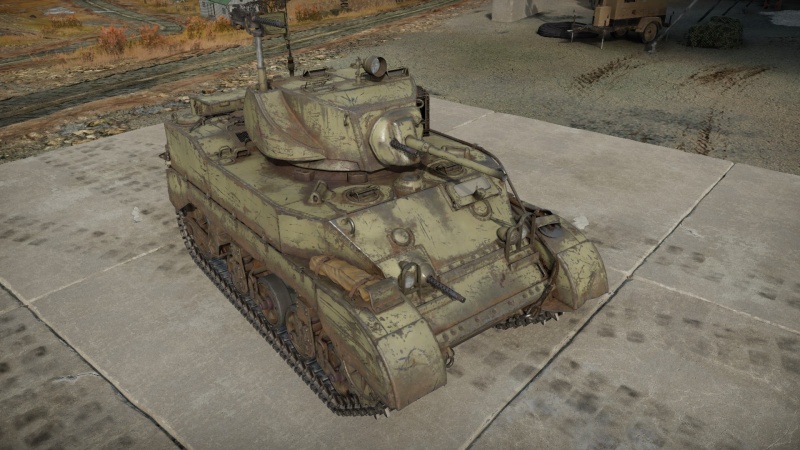 The frontal armour on the ␗M5A1 Stuart is pretty tough for a light tank, with sloped 28 mm on the front of the hull, and a large, 50 mm thick gun mantlet covering up most of its frontal turret. When angled correctly, hull down or at a distance it can bounce off quite a few shots. However it can still be easily penetrated by average guns on its BR. From the front the 4 crews are sitting pretty close together, thus making it highly possible to get one-shot by shells with explosives like the Soviet 45 mm AP or the German short 75 mm APHE. The transmission and the engine are all quite small and low, and the ammoracks are also small, reducing the chance of being immobile or ammoracked. There is also an empty area under the turret crews and in front of the driving compartment, which will absorb those shells with weak damage.

One of the best aspects of the ␗M5A1 Stuart is its superior mobility. It has a top speed of 56 km/h and doesn't lose too much speed off road, even on soft terrain, making it one of the fastest tanks at the BR alongside with the famous BT series tanks. The tracks are quite large and grant you excellent mobility on hard road (solid ground, roads, eg in Advance to the Rhine, Berlin), medium surface (grassland, eg in Fire Arc, Poland) and soft terrain (mud, snow, sand, eg in Sinai, Frozen Pass).

The M5A1 Stuart is armed with a 37 mm cannon as its main armament, the same gun as the preceding M3A3. While being at 2.3, the gun still packs a fierce punch if aiming at the correct area and firing at the correct distance. It is a small calibre fast-firing gun with a maximum penetration of 84 mm at 100 m (M51B1/B2 shell), being able to penetrate most of the opponents it will face. The penetration power and gun accuracy drop a lot beyond 500 m and become unreliable past 700 m. The gun is equipped with a vertical stabiliser, giving the M5A1 Stuart a huge advantage in some cases as you can fire precisely while moving, but keep in mind that it activates only when the tank is driving under 10 km/h.

Specific enemy vehicles that bear mentioning are firstly any Germans with the 20 mm KwK/FlaK38 cannon, this gun might be small but can have up to 64 mm of pen, which is enough to go through the ␗M5A1 Stuart almost anywhere. These guns can also fire 10 rounds at 280 rounds/min before having to reload the clip, meaning that they will very easily take out your crew before you have a chance to respond. To counter, the best chance you have is to angle your frontal armour which can make it difficult for the PzGr 40 rounds to penetrate. The Russian T-50 and T-126 are vehicles you will also see commonly, these have fairly thick and angled frontal armour that will prevent you from easily getting through. These tanks can also carry an APHEBC round that will destroy you in one shot with little difficulty, to counter you should use your speed to attempt to get a side shot into either the turret or engine. If the T-50 cannot move you can outrun its turret and finish it without much difficulty.