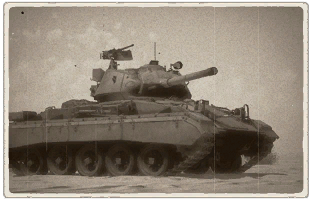 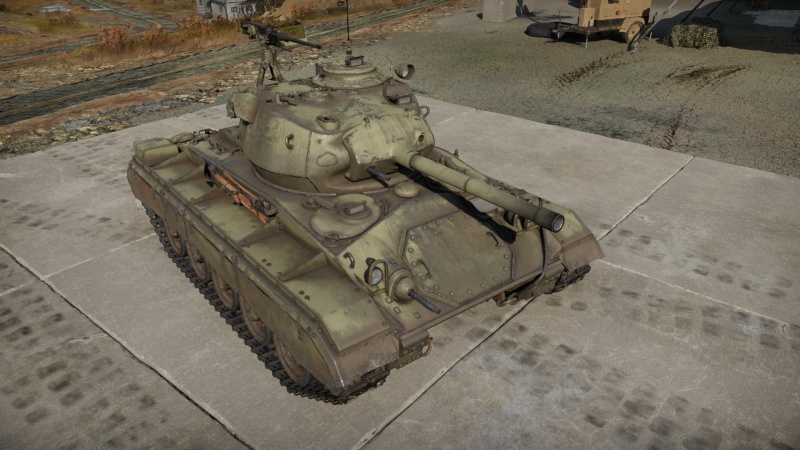 The M24 Chaffee has thin armour on all sides, and can only effectively resist machine gun fire or very low-penetrating shells. Its crews are also very close to each other, increasing the chance of it getting knocked out by a single shot. The V-shaped gun mantlet might bounce some small-calibre shells if you are lucky enough. However, don't rely on it as the rest of the tank is still poorly protected.

The M24 travels at an average of 40 km/h on/off-road which is the average light tank speed. It also responds fast when reversing. Thanks to its short and wide tracks it is able to turn quickly. However the acceleration is poor, making it to feel sluggish when performing short manoeuvres.

The 75 mm M6 gun has two types of AP, one HE and one smoke shell to choose from. The M61 shot, which is an APCBC, is generally better than the M72 AP. It has 63.7 g of explosive filler which brings a deadly blast once penetrated, has better penetration (104 mm max) and it has a slightly lower chance of ricocheting. With the M61 shot, the Chaffee is able to knock out plenty of tanks at its BR with a single shot.

The M24 Chaffee is a very agile little tank. Its good speed allows the player to quickly cap a point early on in the game, or get to some flanking positions easily to get some side shots with the powerful 75 mm cannon. When doing flanking manoeuvres, remember to always look around you, especially to the directions where the enemies are most likely to appear. This can increase the player's survivability on the battlefield a lot, as the M24 has little to no armour and is very likely to get knocked out by the common 75 & 76 mm guns with a single shot. In a surprise close-quarter encounter, you must be confident and aim carefully. Slow yourself down and the stabiliser will help a lot. Overall the M24 perfectly fits a guerrilla-warfare playstyle (hit-n-run).

In April 1943, the U.S. Ordnance Department worked with Cadillac to start on a project for the new light tank, designated Light Tank T24. The powertrain and transmission of the M5 Stuart were used with the ultimate goal of producing a vehicle weighing less than 20 tons. This left the vehicle with relatively thin armour to stay lightweight. At the time, a lighter 75 mm gun was developed for mounting on the B-25 Mitchell bomber without sacrificing performance, and this was mounted onto the light tank in development. The tank used 410 mm wide tracks with a torsion bar suspension that greatly improves cross-country travel. The engine was a Cadillac 44T24 V-8 petrol engine. The chassis was designed with the expectation that it would be used as a basis of many different vehicle roles so it was called the "Light Combat Team". The light tank end design had a low profile at 9 ft. 1 in. height and featuring a crew of five with a three-man turret, an improvement over the two-man turrets of the Stuarts. The first finished vehicle arrived on October 15, 1943, and was deemed a success, starting a contract for 1,000 units that was later raised to 5,000 units. The vehicle was classified as the Light Tank M24 and as the "Chaffee" by the British after US General Adna R. Chaffee, Jr., who helped develop some of America's earliest tank designs. The vehicle was produced by Cadillac and Massey-Harris from April 1944 to August 1945 with a total of 4,731 units produced.

Service in the ROC Army

In order to suppress the expansion of communist forces in Asia and to deal with the tense situation in Taiwan Strait after the end of the Korean War, United States signed the Sino-US Mutual Defense Treaty with Republic of China in 1954. In the same year, the United States handed over surplus supplies of World War II including 233 M24 "Chaffee" light tanks to the ROC armed forces. A number of additional 56 light tanks were supplied in 1966. South Korea also assisted a batch of training tanks to Taiwan. Thus, Republic of China became the largest user of M24 tanks outside the United States.

In 1980, the National Army adopted the M24A1 upgrade program of NAPCO for some of the M24 Chaffee in service. The core modification lies in power system which replaced the original gasoline engine with a General Dynamics 6V53T diesel engine. This upgrade further ameliorated the overall endurance and boosted power (up to 350-400 horsepower). In addition to the engine, the M24A1 was equipped with a new gearbox and the maximum speed was boosted to 65 km/h. M24A1 removes the auxiliary driver and hull machine gun, and some models were equipped with IR searchlight as well. The upgraded M24A1 is distributed to Armoured Cavalry units or low-intensity units.

Fun fact: Since the M24A1 uses the same 6V53 engine as the MCI "National light" Greyhound Bus, therefore its service reliability performance is even better than that of the M41 tank.

Considering that the road conditions in the eastern part of Hualien are relatively narrow and is suitable for manoeuvring tanks of this size, the ROC Army began to transfer M24 light tanks to the units stationed in eastern Taiwan. In order to mobilize these tanks intensively, all M24 in active service were concentrated to the 784th tank battalion of the 151st Division (currently the Army Lanyang Regional Command) in Yilan. During the 1996 Taiwan Strait Missile Crisis, some of these vehicles were sent to Matsu as reinforcements. All M24 light tanks in active service were decommissioned in 1999, expect for some of the remaining M24 used as infantry supporting vehicle or stationary shore defense artillery in the outer islands.

It's known that at least one M24 light tank was transformed into the "Wan Sheng II" in 1975 which was part of the "Wan Sheng" Project carried out by the Joint Logistics Command. The M24 tank turret was transplanted to the aluminum M113 hull produced by Taiwan Aluminum Corporation while the engine compartment was moved to the rear of the hull, transforming the M113 APC into a light tank structure. The "Wan Sheng II" is designed for fire support missions of landing operations. The vehicle never entered mass production due to its poor armour and heavy weight, which was determined unsuitable for amphibious operations. However, the Joint Logistics Command gained valuable experience during the imitation. The lesson learnt here later greatly contributed to the design and production work of CM21 armoured personnel carriers.

(Wan Sheng or "萬乘", means thousands of combat vehicles, is a Chinese allusion referring to a powerful army and therefore a strong nation)

In December 1950, the Chinese People's Volunteer Army seized an intact US M24 "Chaffee" tank during the fight of Minami, North Korea. A series of technical evaluations were carried out to the vehicle but it never saw service in the armoured units of PLA. The very same vehicle is currently on display in the Beijing Military Museum.